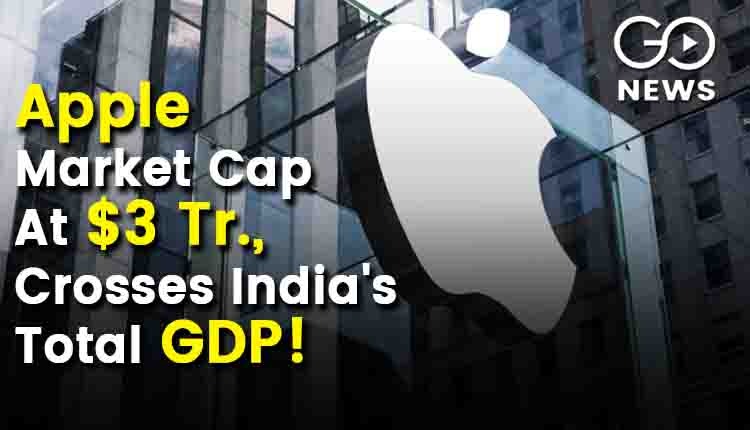 Apple has become the first company in the world to cross the $3 trillion mark, which makes it more valuable than the total worth of the Indian economy. On the first day of trading in 2022, Apple Inc. hit $182.88 per share on intraday trading which took it across this milestone. Apple launched its first iPhone in January 2007 when Steve Jobs was the company’s CEO. In these 14 years, the company’s worth has jumped by 5,800% which is a lot more than the 230% profit it posted on S&P 500 during the same period. In 2011, after the death of Steve Jobs from pancreatic cancer, Tim Cook became the new CEO of the company. The company expanded its services under Cook, moving into video and audio streaming and reducing its dependence on its flagship iPhone series of smartphones.
Also Read:
Unemployment Rate At 4-Month High In December: CMIE Data

 Recently, the company launched many models of the iPhone, of which the most expensive is the iPhone 13 Pro which costs around ₹150,000. If India’s GDP growth rate is examined during this same period, we find that it was growing at the rate of 7.66%  in 2007, it slumped to -7.2%, meaning that in this 13 years, India’s GDP went to 0 and then dipped even below that. India’s present GDP is $2.6 trllion and experts believe that if it is to reach $5 trillion by 2024-25, as claimed by Union Minister Hardeep Singh Puri, it will need to grow at or more than 13% per year, which is highly unlikely.   Apple India’s revenue, on the other hand, is approximately at $3 billion, which is less than 1% of its peak market capitalization. Apple showed annual growth across all of its product categories in its fourth-quarter earnings, with revenue up 29% year-over-year. The iPhone is still the biggest sales driver, Apple’s services business grew 25.6% year-over-year and delivered more than $18 billion in revenue during the quarter. Apple became the first publicly traded U.S. company to hit a $1 trillion market cap during intraday trading on Aug 2, 2018. It hit a $2 trillion valuation just over two years later on Aug 19, 2020. Apple stock rose 34% in 2021