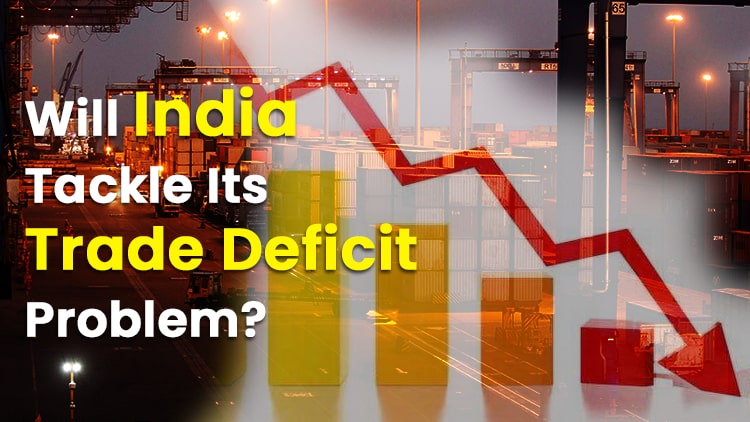 India has a trade deficit with 9 of its top ten trade partners this year as the increase in exports has not been able to outgrow the escalating imports from around the world. According to data available on Department of Commerce website, barring US, India has imported more merchandise goods from its top trade partners. Actually, the deficit with China is at a historic high this year, when the country has had constant spats with its northern neighbour with several border disputes which led to bans on Chinese digital Apps like TikTok and Weibo. Clearly, the sabre rattling with China has not resulted in any substantial reduction in trade between the traditional rivals.
Also Read:
Crude Oil Spikes Globally, Indian Retail Fuel Prices Constant... For Now!

Between April-Nov 2021-22, India’s trade deficit had trotted up to $115 billion in which China’s share was a whopping $43B. Other major countries running up deficit with India were oil exporting countries like Iraq, Saudi Arabia and UAE who benefitted from rising price of crude oil. Switzerland had a $16b trade deficit as Indians imported a record $55.8b worth of gold this year. The only exception was United States with which India had a trade surplus of $21b. In the month of December too India’s trade deficit stood at $21b according to the freshly released data. An increase of nearly 38% over the same month in the last financial year. Compared to December 2019, the country’s trade deficit had witnessed a 73% increase. A comparative figure of country wise comprehensive data for the three quarters was not available on the ministry’s website at the time of going to print. Nonetheless, Commerce Ministry has been trotting up selective data that India’s exports were on a roll in specific areas. For example, the minister proudly shared that electronic exports increased 49% in April-December period over last year, ignoring the fact that the total electronics exports stood at $11b, not enough to make a dent in the large trade deficit. This puts to rest all the speculations that the “Make In India” campaign launched with much fanfare in 2015 has run out of steam. With figures of manufacturing sector petering out in the subsequent quarters after a surge of 49% in the first quarter of this Financial Year, it is clear that many government schemes like PLI have not produced the desired results.