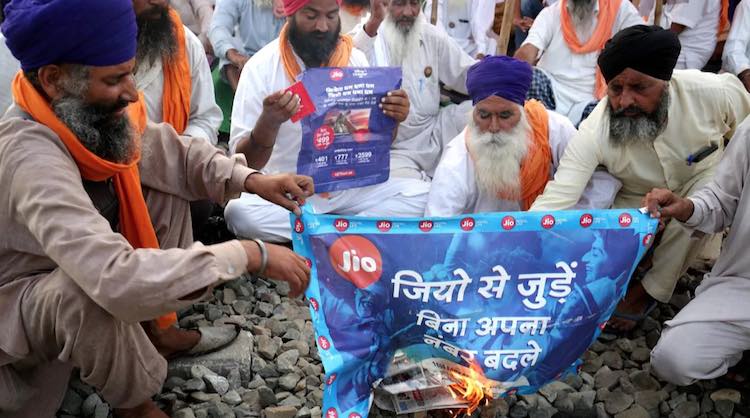 The months-long farmers’ movement against the new agricultural laws has become a problem not only for the Modi government but also for Reliance owner Mukesh Ambani. Protesting farmers believe that the contentious central laws have been brought to benefit industrialists like Mukesh Ambani and Gautam Adani. Farmers had announced a boycott of several big corporate houses including Reliance. Although Reliance has clarified that it has nothing to do with the new agricultural laws.
Also Read:
Journalist Following Harshad Mehta’s Path Banned By SEBI, Loses Job

International news agency Reuters has quoted sources as saying that dozens of retail stores of Reliance Industries have been closed due to the ongoing movement against the new farm laws for more than three months, which has caused a loss of crores of rupees. Since October, nearly half of Reliance Retail’s more than 100 stores, and Walmart’s 50,000-square-foot store in Bathinda district, the epicenter of protests, are completely shut. All these stores have been closed in anticipation of violence by farmers. According to the agency, the loss of Reliance stores across the state is estimated at millions of dollars, or several crores of rupees, while Walmart has suffered an estimated loss of more than $ 8 million. Walmart has 29 stores in the country. Earlier in December, unidentified people in Punjab disrupted Jio’s nearly 2,000 towers and several of the company’s petrol pumps. Before that, the boycott of Jio Sim and Reliance’s music app was announced by the farmers. Farmers are not only burning sims to display their fury but are also running campaigns of ‘Boycott Jio’ and ‘Port Jio’ on social media. Many users started posting on social media about cancelling their Jio mobile network and Jio Fibernet connection. Few also posted screenshots of porting and SIM cancellation requests and urged others to do the same. In November, business in Punjab has suffered an estimated loss of $4 billion due to the protests, while an industry watchdog estimated a total loss of $9.6 billion to the Indian economy. According to experts, if public participation in the farmer movement increases and it lasts for a long time, Reliance may have to pay a heavy price.