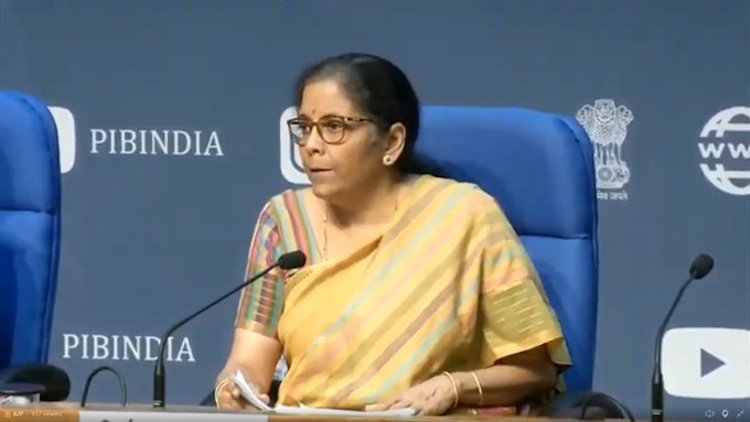 In a bid to restart the economy, battered by the Coronavirus, Prime Minister Narendra Modi had announced a fiscal package of Rs 20 Lakh crore. The PM had claimed that this amount was equivalent to 10 percent of India's GDP. So much so, that Finance Minister Nirmala Sitharaman held five press conferences to unveil the package in totality.  However, it is evident that the package couldn't live up to the expectations of the share market. She presented the first part of the package on Wednesday, and on Thursday, the Sensex, Nifty and Bankex shrunk rather than elevating to heights.
Also Read:
16 Migrants Killed In Road Accidents In UP, Bihar & Maharashtra

The Finance Minister announced Rs 3 lakh crore as loan for the revival of micro, small and medium industries. Similarly, a special liquidity scheme was announced for NBFCs and housing financing companies. Rs 90,000 crore was also kept aside for the power sector. But all this money was a loan, which needed to be returned with interest.  Now, many top financial institutions and global banks are questioning the size of the fiscal package and describing it as insufficient for a country like India.  As per HSBC, India's fiscal package is actually only 1 percent of Its GDP. UBS says it's 1.2 %, Deutsche Bank 1.1 %, Morgan Stanley 0.7 %, Edelweiss 0.9%, Jefferies 1 %, Philip Capital 0.8 % and Citibank has opined that India's fiscal package is only 1 % of its GDP.  Therefore, it is pretty clear that one can inflate packages with the jugglery of numbers and presenting loans as relief, but then it is still unlikely to revive the economy.