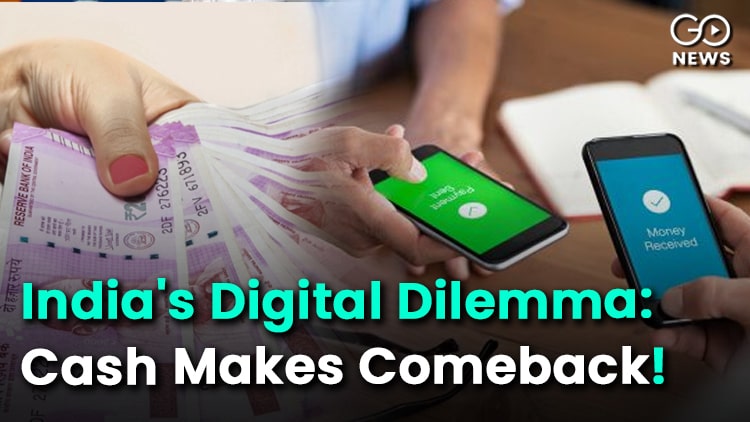 Five years after demonetisation and the launch of Unified Payments Interface (UPI) - both extolled as silver bullets- cash economy of India has hit back with a vengeance. Among the BRICS countries, India’s cash to GDP ratio is the highest and increasing; From 11% in 2016 it is now 14.5%. On the other hand, digital payments across all platforms are showing signs of slagging after the economic downturn of 2018-19. Digital payments are down more than 18% in the last 3 years despite the central government’s determined push to increase the digital habit.
Also Read:
OIC Pak Summit: Chinese Foreign Minister As ‘Guest Of Honour’, India's Displeasure Ove

Significantly, the UPI platform, adopted by the government for payments for several schemes, is now showing signs of saturation as the volumes are not keeping pace with value of the transactions.  First let us have a look at the cash in circulation. Ten years ago, cash to GDP ratio was 11% and hovered around 10-11% for many years before that. The government’s overnight policy of demonetizing currency notes of 500 and 1000 denominations created a national crisis of cash flow. Byzantine lines were seen outside the banks, cash was rationed by the banks and the misery caused to the people was dubbed “organised plunder and legalized loot” by the former Prime Minister, Dr Manmohan Singh, an economist of global stature. The Modi government, among other things, promised that the move will lead to increase in the organized economy by curtailing the cash economy which was the bane of black money. Slowly, the government started printing new 500 and 2000-rupee notes which increased the cash flow gradually. Then the printing of fresh 2000-rupee notes was stopped altogether 3 years ago. By this time cash to GDP had reached the 11% mark. After the pandemic, people scrambled for more cash as security and now the cash to GDP ratio is at 14.5%, much higher than Brazil, Russia, South Africa and China where the need for cash also increased. 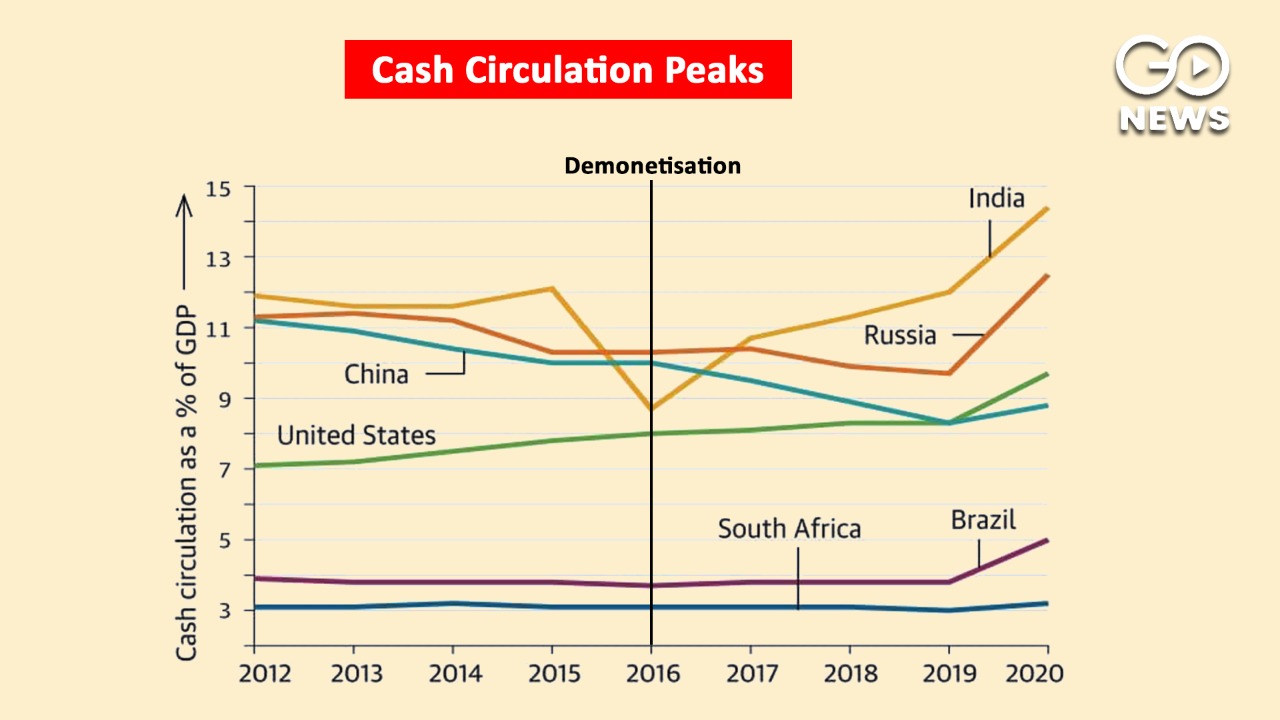 Also see our earlier story on demonitization after 5 years for more context.  The digital economy of India has been made a showpiece for the world by the government at every global forum from G20 to World Economic Forum. Hundreds of new companies have sprung up to facilitate digital payments supported by the government, funded by the foreign private equity and venture capital dollars but most of them are running in losses. Economy of scale and public adoption will finally make these ventures profitable; we were told. But as India’s economy sputters after the knock of the pandemic, this is hope is becoming slim. At the height of the digital euphoria in 2018-19, digital payments as a proportion of the GDP stood at 8.7%, now it is down to 7.1% - a decline of 18.39%. 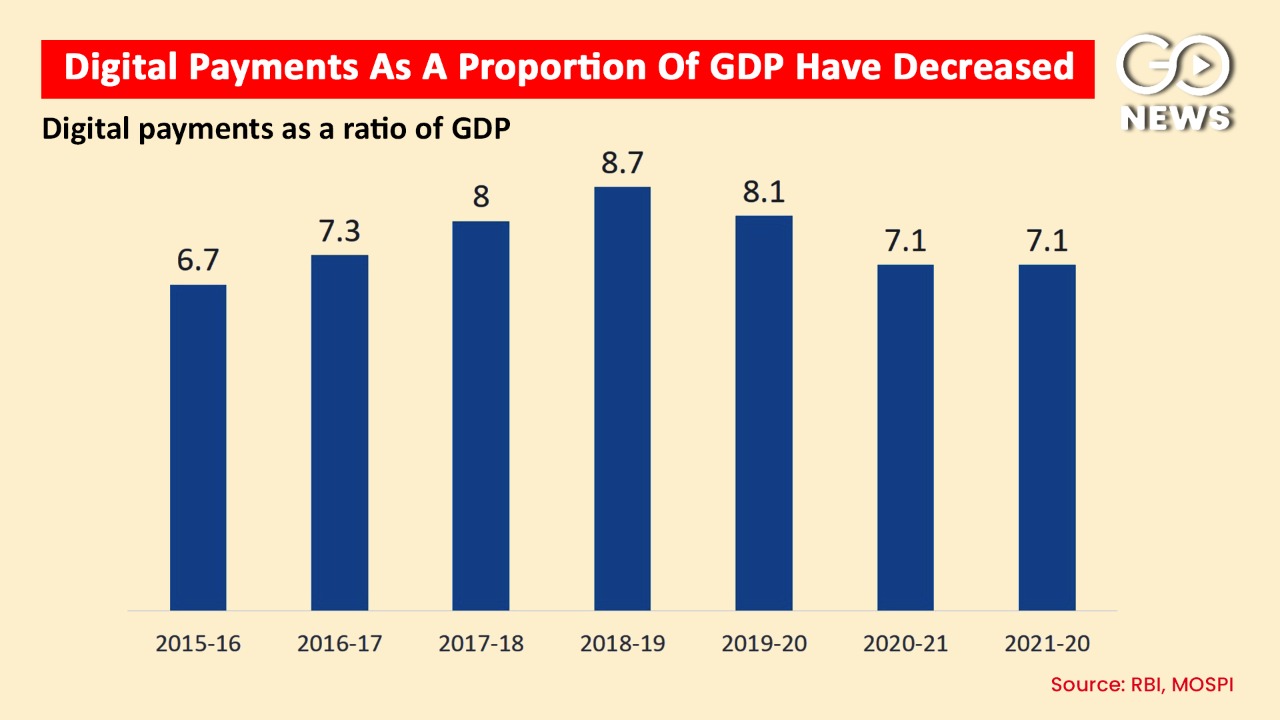 The government by moving its massive financial transactions to UPI was able to attain scale as 4.4 billion transactions were made last month for Rs 8051 billion. But digital payments are not immune to economic strains. Many digital payment companies, including the leader Paytm, are facing headwinds. Each transaction on UPI averaged Rs 2300 three years ago and now it is less than Rs 1820. Which leads to the conclusion that the digital economy is feeling a crunch. 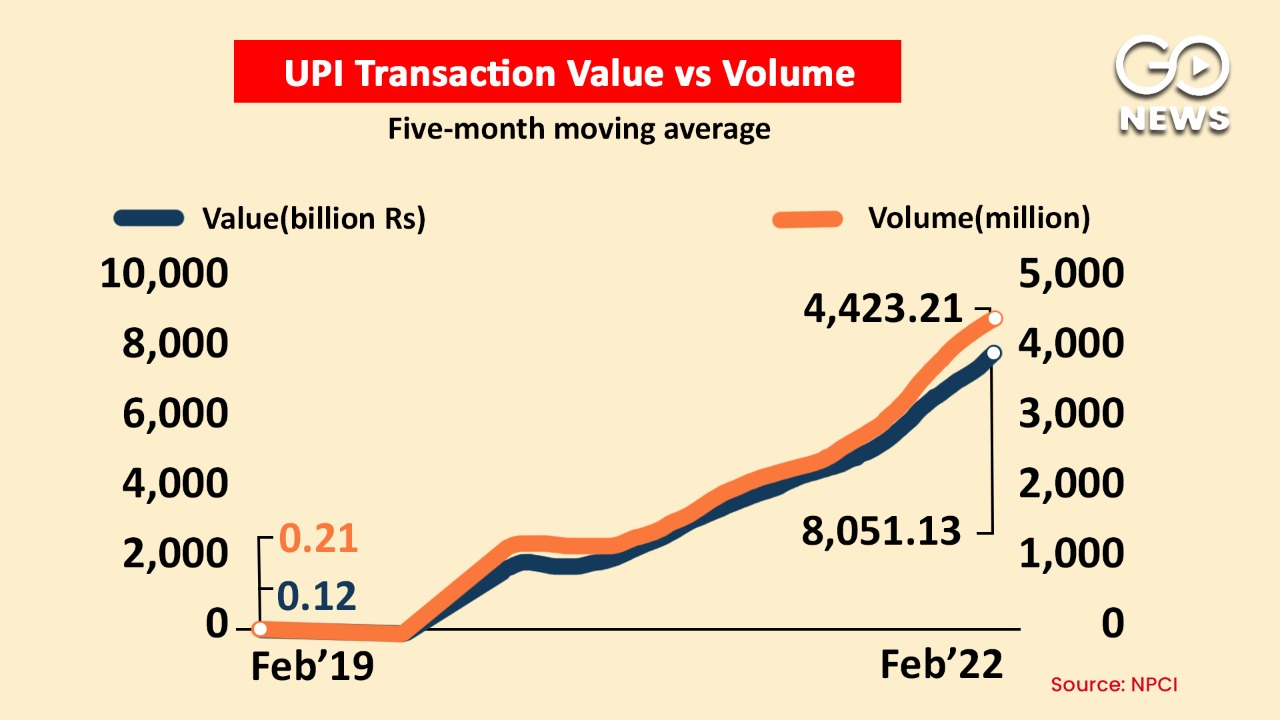 As citizens increase their transactions in cash as is obvious by the record volume of money in circulation, it is only the government-based transactions, from payments of essential services like driving license to filing income tax to inter-bank transactions, are sustaining the digital payments edifice. The fact is that a large part of India is still on the margins of its economy. Income taxpayers and credit card holders number around 6 crore, in a country of 90 crore adults. That is less than 7% of the adult population. The increase in smartphone penetration has widened the participation in the digital economy – at times by government diktats - but it is not enough to revolutionise an economy where 80 crore people still require government rations as was exposed by the pandemic. It is time India woke up from its Digital Dream.