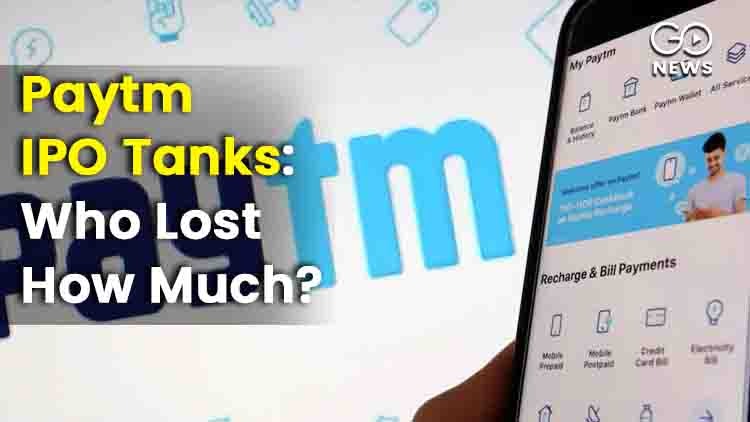 One97, the parent company of Paytm, had one of the most sensational IPO crashes of 2021, and indeed, Indian stock market history. Buoyed by the “Digital India” drive and followed by the coronavirus pandemic that encourages contactless, cashless payments, Paytm was being seen as a domestic digital payments behemoth by many, even though it already had to contend with a range of other platforms. As at the time of writing, Paytm’s share price is ₹1,355, which were issued for ₹2,150 on its debut listing, and lost 27% of its market value on the first day itself. As of now, Paytm has lost 36% of its market cap since listing.
Also Read:
10 Bills Passed In Rajya Sabha This Winter Session Of Parliament; 2 Bills Sent To The Sta

The top three investors who lost the most in Paytm’s sliding stock market performance are Antfin (Netherlands) Holding B.V., SVF Panther (Cayman) Limited, and DG PTM LP, whose average cost of acquisition per share is, respectively, ₹1,833.3, ₹1,820.2, and ₹1,707.7. According to Paytm’s present share value, the investors Antfin (Netherlands) Holding B.V. lost 26% of its investment, Softbank’s SVF Panther lost 25.54%, and DG PTM LP lost 20.65% of its investment. Gong by the data on shareholding by respective investors, Jack Ma’s Alibaba-held Antfin lost ₹8761 crore, i.e. more than $1.16 billion. Similarly, Japanese Softbank-held investment arm SVF Panther lost ₹365 crore,         and Connecticut-based investment firm DG PTM LP lost ₹165 crore, having invested $140 million last year as well. Paytm’s Sensational IPO Crash Paytm had crashed 27% on its first day of listing and has been on a downturn ever since. Paytm turned out to be one of the worst performing IPOs of 2021. Retail investors lost over 35% of their investment over two days of trading.  It is reported that investors lost up to ₹2,835 crore on the first day of listing, since 4.9 crore shares were offered at an initial price of ₹2,150, making the total value around ₹10,403 crore, which tanked to ₹7,569 crore by day’s end. Paytm’s debut debacle on the stock market  was different from that of other startups Zomato, Nykaa, and PolicyBazaar, but its impact could be felt on the sector as a whole, shaving off 1.28% from Zomato, and 9% from PolicyBazaar. One of the main reasons for pessimism in the market regarding Paytm was its financial management and long-term profitability. In March, the company reported that its sales in its core business of payments and financial services was up by 11%, but also reported a drop in revenue of 10% at the end of July. Paytm’s poor performance at the stock market can have ripple effects on the tech startups planning to go public in the Indian market, and urge investors to be cautious as well, particularly of overvalued listings amid concerns of profitability. Paytm competitor in the digital payments space,  MobiKwik, delayed its planed IPO listing slated for November after Paytm’s dismal show. Gopal Agrawal of Edelweiss Financial Services Limited was quoted by Bloomberg saying that Paytm’s poor showing will “nudge people to be cautious”.