Paytm One Of Worst Performing IPOs Of 2021 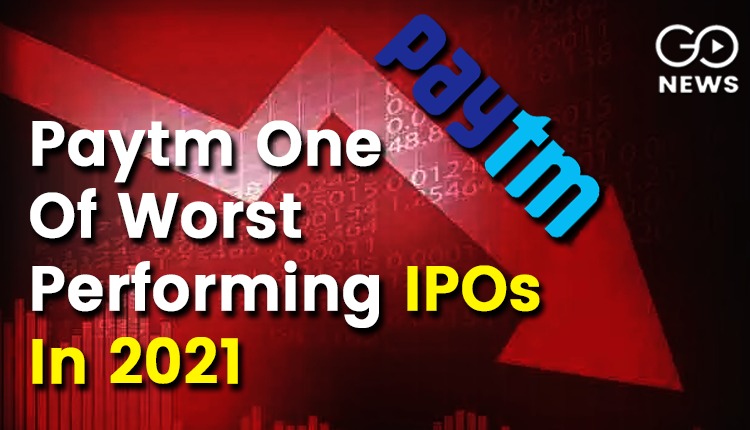 Recently, the Indian digital payments platform had created waves when it announced its IPO, which was touted as the country’s largest at $2.5 billion. What followed was a debacle as its share prices tumbled 27% on the first day of trading, i.e., 18th November. The company lost more than a fourth of its value on its first day of trading itself, making it one of the biggest losses faced by a technology company. Currently, the stocks of One97 Communications, the parent company of Paytm, are selling for ₹1,564.60, up by 0.24% since last month, and down 5.80% over the past week of trading (5 days). Paytm has therefore lost 27.22% of its market capitalization since its shares were issued for ₹2,150 on its debut trading day. Investors suffered losses of up to ₹40,000 crore due to the crash.
Also Read:
Despite India's TikTok Ban, Chinese Social Media Dominance Rising To US Levels

FINO Payments Bank and SJS Enterprises also figure among the worst IPO performers in 2021, with respective listing gains of -31% and -20.8%.   Prominent banks were backing up the Paytm IPO, such as Ant Group, Soft Bank, Morgan Stanley, Goldman Sachs Group Inc., JPMorgan Chase & Co., ICICI Securities Ltd. and Axis Capital Holdings Ltd. However, after the debut trading debacle, they were not available for comment, as per media sources. Macquarie Capital Securities (India) Pvt. Ltd, a financial services firm, had tagged Paytm as “overvalued” even before the day’s trading had begun on its stock market debut, questioning its long-term profitability and its corporate governance. Its analysts Suresh Ganapathy and Param Subramanian noted that “Considering Paytm’s heavily cash-burning business model, no clear path to profitability, large regulatory risks to the business and questionable corporate governance, we believe the company is overvalued at the upper end of price band of 2,150 rupees” The company had reported in July that it had seen 11% increase in sales in its core business of payments and financial services for the financial year 2020-21 but tis revenues were down by 10%. In October, the Gross merchandise Value (GMV), i.e., the total volume of sales through its site, rose by 131% to ₹832 billion ($11.2 billion). Loans issued also increased by over 400% to reach ₹6.27 billion. On November 27, the company announced that for the quarter ending on September, its net loss increased by 8.4%, i.e., from ₹4.37 billion to ₹4.74 billion year-on-year. Its revenues during the same period grew by 49.7% to ₹11.35 billion. Paytm’s crash was 10% more than the next worst performer on the list of Indian IPO’s with most losses. In October 2015, Coffee Day Enterprises Ltd. had tanked by 17.60%, and Reliance power Ltd. had also declined by 17.20% in 2008. Access Hurdles To Lending As A Factor In IPO Crash Investors had raised concerns about the company’s possibilities of growth and its being debarred from the lucrative vertical of lending in the fintech industry, and this is being seen as a contributing factor to the pressure on its share prices. On Thursday, the Reserve Bank of India (RBI) granted it a “scheduled bank status” and its share price showed an uptick of 2.62%. Paytm’s Payments Bank can now partner in the government’s financial inclusion schemes, participate in government and corporate bids (request for proposals), fixed rate and variable rate repos and reverse repos, and marginal standing facility (MSF) from the RBI. Paytm Has One Of Highest Shres Of UPI Transactions   Paytm is one of the most popular digital payments platforms in the country and it was promoted by Prime Minister Narendra Modi himself in the wake of demonetization and the government's push towards a "cashless" economy. The chart below shows its dominance in the UPI (Unified Payments Interface) payments ecosystem, despite heavy competition in the segment from other players. However, it is also a fact that Paytm, like other apex competitors in the digital payments space, are largely backed by foreign investors. Last year, it was reported that paytm Payments Banks had the lowest rate of transaction failures due to technical reasons among all UPI apps.