Why Is The GDP Down?

India’s Gross Domestic Product (GDP) growth slumped to a six-year low of 4.5% during July-September, revealed the Government on Nov 29.  According to data released by the Ministry of Statistics and Program Implementation, the second-quarter GDP growth rate was 4.5% as against 7% during the corresponding period of last fiscal (2018-19). This is the lowest growth rate after the fourth quarter (January-March) of fiscal year 2012-13 when the GDP growth rate was 4.3 percent. Also, this is the sixth successive quarter of growth rate declining.
Also Read:
'Frozen 2' Set To Smash 'The Lion King' Record

Here are 10 points showing the crisis that the economy is in - 1 - Rail freight earnings moved to negative growth in August which were 4.3% at the start of the quarter (in April) 2 - Electricity consumption has gone down to negative at the end of the quarter. 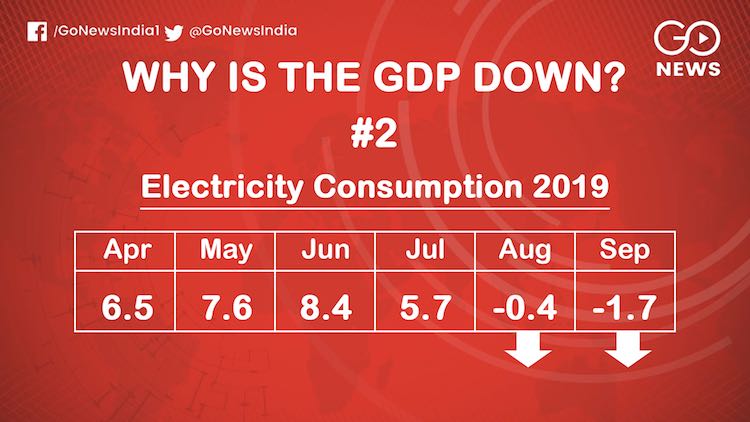 3 - Industrial Production has also come down to negative in September

6 - As demand fell, there was also a decline in imports. From 6.0 in April, imports have been hovering in negative since June. 7 - India generated 12.4% less energy in October 2019 as compared to 2018. 8 - Country's Power plants are operating at less than half their production capacity while few have decided to stop production 9 - A significant decline in coal production witnessed in October 2019. 10 - Last but not least, the country saw a dip in petroleum production during second quarter of 2019