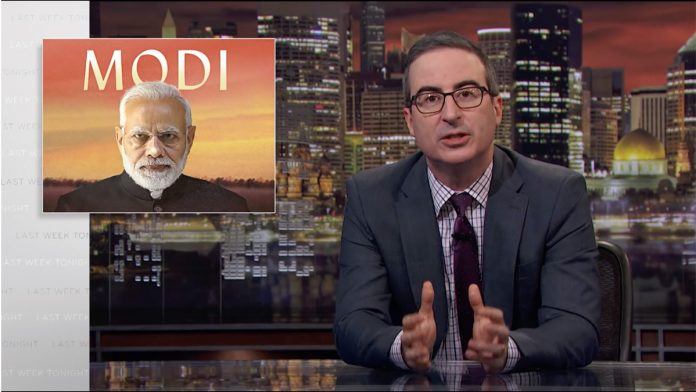 Hotstar, the local platform run by Walt Disney Co., has blocked an episode of John Oliver’s show ‘Last Week Tonight with John Oliver’ where the famous British comic criticises PM Modi. The Emmy-winning British comedian known for his sharp and satirical humour was previewing Donald’s Trump India visit when he took shots at the Indian PM. Also Read: Delhi: Parents And Children In Distress After CBSE Postpones Board Exams

The show typically airs every Tuesday in India but on Feb 25 (Tuesday) only older episodes were to be found on the streaming platform. In the 18 minutes episode still running on Youtube, Oliver also criticised the US President Donald Trump for calling Modi “Father of India” and said doing so is “stupid at best and dangerous at worst” Raising the level of heat, Oliver said that since India is home of the “symbol of love” Taj Mahal and “frankly deserves much more than this(Modi) temporary symbol of hate.” He then referred to the controversial citizenship law, CAA, as an attempt to “Marie Kondo” India, referring to the popular Japanese “organising consultant”, famous for her ability to remove all “unsightly things” from a messy room. Oliver though critical of the PM talked about the “inspirational” personal story of his rise from a tea-seller in Gujarat to running the state and eventually the country in 2014. Interestingly, the pilot episode of the show started with Narendra Modi as the subject back in 2014 when he came to power. While the episode was not even aired on Hotstar, many Indians took to PlayStore in order to vent their anger by giving the streaming service 1 star.  Though such instances have now become common where companies have to face the wrath of their consumers for showcasing political material, especially in India, however, TV personalities like Trevor Noah, Stephen Colbert, and India-origin Hasan Minhaj have taken on several controversial issues in the US, they have not faced this kind of backlash.
TAGS PM Modi Donald Trump Last Week Tonight John Oliver Walt Disney Hotstar

By GoNews Desk 45 minutes ago