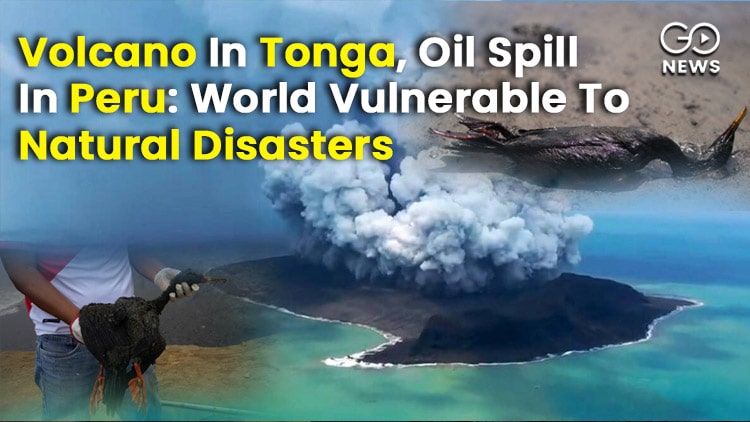 On January 14th 2022, a volcanic eruption that began on the uninhabited island of Hunga Tonga–Hunga Haʻapai in the Kingdom Tonga caused a massive 15-meter high tsunami that has led to various hardships for the citizens and led to the deaths of three people. The eruption occurred northwest of the country’s capital, Nuku’alofa. This underwater volcanic eruption in the Pacific island nation is believed to be the largest of its kind in 30 years. Sione Hufanga, the United Nations coordinator for Tonga, has stated in an interview that “the people of Tonga are still overwhelmed with the magnitude of the disaster.”
Also Read:
Congress Promises 20 Lakh Jobs, Filling 1.5 Lakh Teacher Posts, Other Promises In 'Youth M

READ: India Pledges $200,000, Expresses "Deep Sympathy" For Tonga Volcano Disaster A high level of tsunami preparedness has led to the low death toll that is being praised worldwide, but other issues such as a collapse of undersea cable networks causing a communications blackout remain. The volcanic eruption on the Hunga Tonga–Hunga Haʻapai island group occurred 43 miles north of the country’s main island, Tongatapu. It shot ash for over 20 kilometers into the air which mostly landed back on the island nation, including on roads, buildings, and runways and affected 84,000 people in a country with a population of 1,00,000.  It is being termed as a significant volcanic eruption and its shockwaves were felt as far as Chennai in Tamil Nadu, India, which is over 12,000 km away, in the form of a sudden spike in atmospheric pressure 10 hours after the explosion. Tsunami Causes Internet Shutdown, Major Oil-Spill   Tsunami waves as high as 50 feet were recorded on islands near to the volcanic explosion which caused widespread property damage. Communication with the outside world has also been disrupted  and the country has no internet access as of yet because the only undersea cable that connects Tonga through a relay in the neighbouring nation of Fiji, has been damaged due to the volcano and will have to be repaired by a special undersea repair ship. 10,671 km away in Peru, the volcano also caused a major oil-spill that has led various marine animals being killed and washed ashore. Spanish energy company Repsol said that the spill, which occurred off the coast near the country’s capital Lima, would take until the end of February to clean up. OEFA, the environmental agency of Peru, has said that the spill has affected an area of 1.7 million sq. meters on land and 1.2 million sq. meters in the ocean. A Dead Bird Coated In Oil Being Held Up By A Worker Off The Coast Where The Oil Spill Occured  The government of Peru says that Repsol has spilled over 6,000 barrels of oil into the ocean which is an important source of food for the people in the county. The company’s La Pampilla plant represents 54% of the refining capacity of Peru.   ‘Environmental Emergency’ Declared By Peru President Pedro Castillo has said that an expert committee has been constituted to deal with the environmental crisis which has affected 21 beaches of the country and an evironemtnal emergency has been declared. Environmentalists and activists have recovered the dead bodies of oil-stained birds and marine life while the authorities have arranged for food relief for affected families as people are barred from accessing the affected beaches. The United Nations and its agencies such as the WHO (World Health Organization) and the WFP (World Food Programme) have stepped in to assist with relief measures in the aftermath of the disaster.