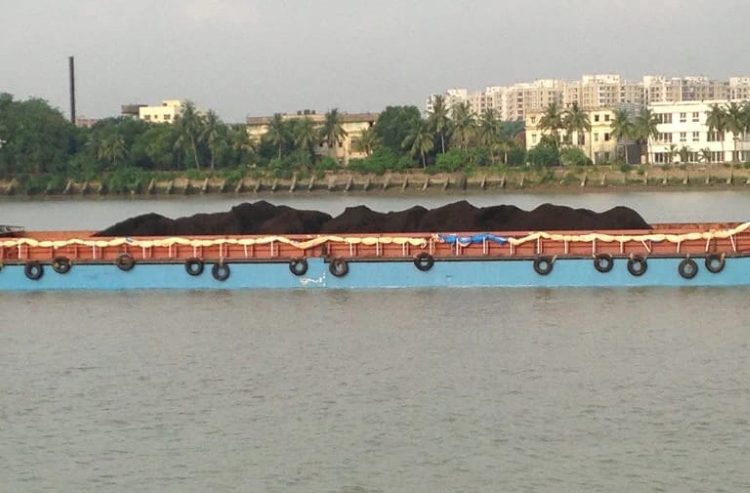 By - Rishika Pardikar/thethirdpole.net No attempt made to salvage the cargo that keeps poisoning the Ganga and other rivers.
Also Read:
Delhi LG Reverses Order: Not All COVID-19 Patients Need To Go To Care Centres

On May 25, a barge carrying 800-900 tonnes of fly ash from West Bengal to Bangladesh sank in the Hatania-Doania River at the edge of the Sundarbans. Fly ash is the toxic residue left after coal is burnt. This is the fifth time since March 2020 that a barge laden with fly ash has capsized along routes used to export the material from India to Bangladesh. The routes include National Waterway 1 (NW-1, along the Ganga), National Waterway 97 (NW-97, in the Sundarbans) and the Indo-Bangladesh Protocol (IBP) routes.

Fly ash is exported from coal-fired power plants in India to Bangladesh, where it is used to make cement. Most come from West Bengal, transported by barges on the network of rivers connecting the two countries. “On an average, 7-10 capsizes have happened every year along the protocol route in the past five years,” said Sheikh Rokon, secretary general of Riverine People, a Dhaka-based NGO. “I have not heard of any clean-up or recovery effort… the vessels are abandoned because rescue operations cost more than the vessel itself.” Fly ash contains heavy metals that can cause severe contamination of water bodies. In 2016 a committee set up by the National Green Tribunal (NGT), India’s environmental court, assessed the environmental impacts of fly ash pollution on Ennore creek and areas surrounding North Chennai Thermal Power Station. It found heavy metals like lead, mercury and copper at levels above the safe limit in samples of fish, crab, prawn, oyster and mussels. The experts said fly ash deposition also caused habitat loss, including the reduction of mangroves. The environmental impact of capsizes aside, transportation activities are harmful too. “What we have is the transport of a substance that is highly toxic in open conditions in river systems that have high levels of biodiversity and livelihood dependence,” said Ritwick Dutta, an environmental lawyer and founder and managing trustee at the NGO Legal Initiative for Forest and Environment (LIFE). Dutta noted that studies have established that fly ash contains up to 100 times more radiation than a nuclear power plant producing the same amount of energy. “This fact was also recorded in an NGT judgement in 2011,” he added.

Fly ash blows into the air due to faulty pipes [image courtesy: Legal Initiative for Forest and Environment]

Responding to questions about the toxicity of fly ash and its impact on local ecology and people, Rokon said, “There are definitely environmental concerns with transporting fly ash through riverways, especially through the Sundarbans. But this issue is little discussed, and people are not aware.” Most of the barges used to transport fly ash are Bangladeshi, Rokon said. Asked why so many barges sink, Rokon mentioned irregular and low water levels in the rivers, use of old, worn-out vessels, and lack of route maintenance and overloading. The barge that sank on May 25, which was Bangladeshi, foundered after hitting a submerged jetty. Route maintenance mainly involves dredging, which has adverse impacts on biodiversity. Dutta said barge owners are legally liable for capsizes, even if they happen due to events such as storms that are beyond the owners’ control. He referred to a principle called ‘no fault liability’. For example, he explained, if a dam breaks because of an earthquake, the builder is still responsible because the destruction was due to the building of the dam. Dutta said that ‘no fault liability’ would apply to barge owners that are not Indian if a barge capsizes in Indian territory. Read the full article here.