Birds In A Milk Crate 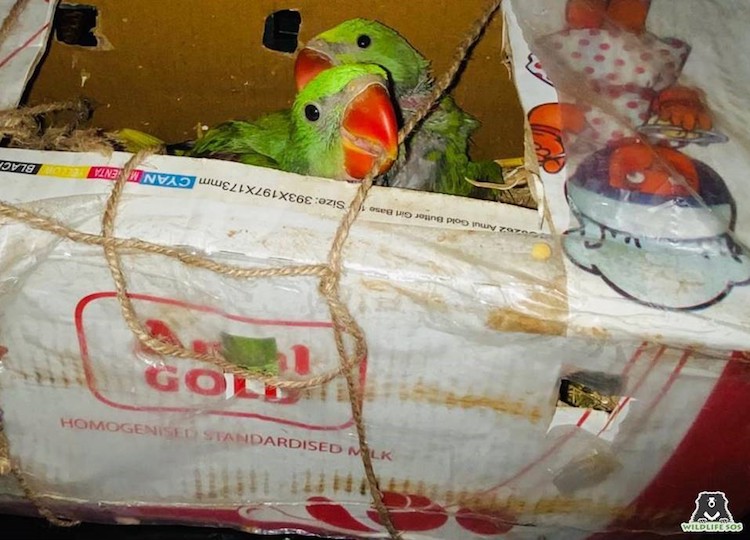 On Sunday night, a consignment of Alexandrine parakeets was found in illegal custody of wildlife traffickers on-board the Rajdhani Express at New Delhi Railway station. The baby birds were crammed into milk crates to avoid suspicion and evade detection. A concerned passenger heard the sounds from the milk crates and alerted the Delhi Forest Department and the railway authorities.

Despite being listed as a “near threatened” species, the Alexandrine Parakeet (Psittacula Eupatria) is one of the most sought after species in the Indian live bird trade. Three to four weeks old parakeet chicks are routinely captured from the wild and are crammed into tiny containers for transportation to bird markets in Delhi, Mumbai, Hyderabad, Patna, Lucknow and Kolkata. In most cases, the birds die en-route due to stressful conditions.

The consignment was intercepted at New Delhi Railway Station by a team of Forest Officials, following a formal order from the Chief Wildlife Warden. Around 11:30 pm on Sunday night, the birds were handed over to Wildlife SOS, an NGO for treatment and care. “The rescued birds are very small and vulnerable requiring extensive care and feeding every 3 to 4 hours. The birds will be released in their natural habitat once they are fit for release,” said Geeta Seshamani, Secretary, Wildlife SOS.