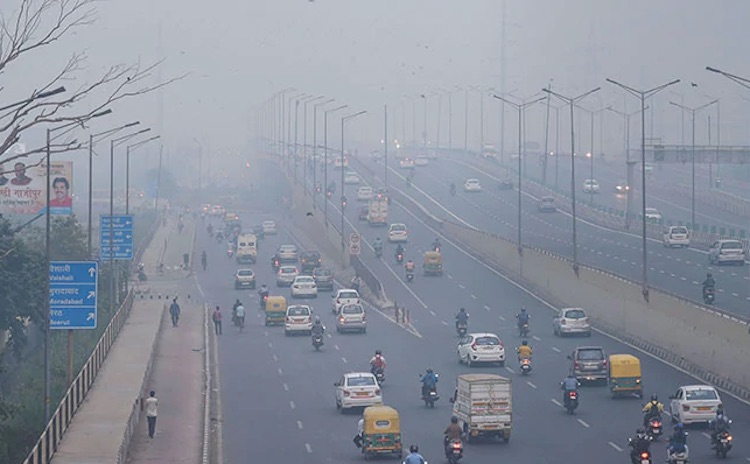 The national capital, Delhi, woke up to a thick sheet of smoke on Tuesday as air quality index tops 500 in several areas. The ground realities were so poor that visibility in many areas is limited not more than 8-10 feet. According to SAMEER, the air monitoring app of the Central Pollution Control Board (CPCB), the air quality index (AQI) in Delhi-NCR areas was recorded 500 which is “severe” category. As per international standards, above 60 AQI is dangerous for humans but in Delhi, it is recorded in many areas beyond 500.
Also Read:
Cheering Biden’s Victory, BSE Sensex, Nifty 50 Hit All-Time High

The air quality was the worst in Delhi till 7 am in Dwarka Sector 8, Mundka, Punjabi Bagh, Pusa Road, Mandir Marg, Jawaharlal Nehru Stadium, Sri Aurobindo Marg, Rohini, Okhla Phase 2 and Pratapganj. In all these 10 places, the AQI was recorded 500. Also, the visibility on the roads in these areas was very low. Besides, AQIs was recorded 499 in Aya Nagar, RK Puram, Sirifort and Shadipu, 497 at Delhi airport, 494 at Mathura Road, 493 at Lodhi Road and Jahangirpuri. Gurugram adjoining Delhi also had poor air quality. The PM2.5 level was recorded 499 in Gurugram's Sector 51, 479 in Vikas Sadan, while AQI 475 was recorded in Manesar. In Noida-Ghaziabad, then it has become extremely difficult for people to breathe due to pollution here. AQI 499 was recorded in Noida Sector 116, 481 in Noida Sector 62 and 471 in Greater Noida, 479 in Indirapuram and Vasundhara in Ghaziabad. However, on Monday, air quality was recorded in the "severe" category in 29 of the 35 air quality monitoring centres in Delhi.