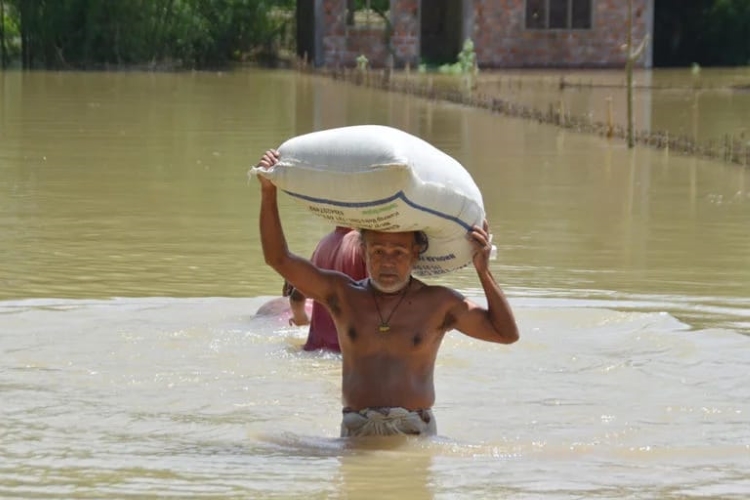 The 2020 summer monsoon has just about started but is already flooding large parts of Assam, Meghalaya, northern Bangladesh, Bhutan, Sikkim and Nepal. An estimated 50 people have been killed in these parts of South Asia, including 23 in Assam and 18 in Nepal. Around 100 more people were killed by lightning strikes in Bihar and eastern Uttar Pradesh as the monsoon reached these areas. A flash flood caused by heavy rain in the Sikkim Himalayas washed away 19 homes last weekend and displaced 35 families of Passidang village in the northern part of the state. Flooding has almost halted fire-control operations in Assam’s still-blazing Baghjan gas well. One bridge that reaches the well has collapsed, while another is being rigged up. Evacuated residents are surrounded by floodwater, unable to maintain mandatory distance in the middle of the Covid-19 pandemic. A landslide caused by heavy rain partially blocked the Arun river that flows down from the Everest region in eastern Nepal. In downstream Bihar, India, the Ganga, Kosi, Mahananda and Barindi rivers are flowing above their danger levels. Half a metre of rain fell within 24 hours in Cherrapunji – excessive even by the standards of the world’s second-wettest place – and it all flowed down the southern face of the Meghalaya plateau to Bangladesh, where the wetlands in the north of the country are overflowing. The India Meteorological Department (IMD) forecasts more “heavy to very heavy” rainfall in these parts of the world over the next few days. At the same time, the IMD has forecast that July rainfall in the eastern half of the subcontinent will be lower than average. Climate Impacts This fits with scientists’ forecast of the effect climate change has on the monsoon: fewer rainy days but more rainfall on those days. Apart from the cycle of floods and droughts, this means less of the rainwater percolates underground to be available in the dry months. And farmers dependent on rainfall find it much tougher to decide when they should sow their main crop of the year. It can rain heavily for a few days, and then stop when the plants need water. The summer monsoon brings around 80% of South Asia’s annual rainfall. Scientists say lightning strikes have become more common in recent years because clouds are at higher temperature and therefore carry more static electricity. This little-studied impact of climate change is at its worst during the first days of the monsoon, when relatively drier clouds precede the heavy rain-bearing clouds. A round of recriminations has started within India’s disaster-management circles after around 100 people died of lightning strikes within 48 hours, 83 of them in Bihar. The Bihar government did send out warnings through a new app. But most of the farm workers hit by lightning did not have smartphones on which they could download it. Early Devastation The flooding started early this year as the tail-end of the May 20 Cyclone Amphan dumped an enormous amount of rain in Assam’s Brahmaputra valley. It affected an estimated 300,000 people in nine out of Assam’s 33 districts. Now the state is facing a second wave of floods. Some of the deaths are due to boats overturning in the floodwaters of the Dangori river in eastern Assam. This is a tributary of the transboundary Brahmaputra river, which is also flowing above the danger mark all the way from Dhemaji and Dibrugarh to downstream Dhubri on the Bangladesh border. The Brahmaputra has already flooded the Kaziranga National Park – the world’s largest refuge of the one-horned rhino – and other protected forests. It is threatening to spill its banks next to north-east India’s largest city Guwahati. Ferry services to Majuli – the world’s largest river island – have been stopped. Further downstream, all the rivers flowing down from Bhutan to join the Brahmaputra are in spate. Engineers from India’s Central Water Commission who control Bhutan’s Kurichu dam have been forced to open some of the gates. Downstream, India’s Manas National Park is among the many areas flooded as a result. In Assam, the India-wide lockdown that started on March 25 due to the Covid-19 pandemic has affected the repair of embankments meant for flood control, just as it has in Bihar. The floodwaters are flowing into Bangladesh, both from the Brahmaputra and from its tributaries on both banks. There is serious worry that the highly productive farms of northern Bangladesh may be flooded out this season.

The Dainthlen waterfall at Cherrapunji carrying a far larger cascade than usual after heavy rain in late June 2020 [image by: Banrapkumar Nongbri]