By Rishika Pardikar/thethirdpole.net On April 23, 2020, the Forest Advisory Committee (FAC) of India’s environment ministry met to deliberate the 3,097-megawatt Etalin hydropower project in the north-east state of Arunachal Pradesh. Also Read: This Bakrid, Goats Being Sold Online Amid COVID-19 Pandemic

The proposed dam is a joint venture between private company Jindal Power Ltd (JPL) and the Hydro Power Development Corporation of Arunachal Pradesh Ltd, a public sector undertaking. The minutes of the meeting show that the FAC did not decide whether to approve the project but sought views from the Ministry of Power (MoP) with respect to three issues: the six-year delay to the project and change in the country’s energy plans during this time; the high tariff structure; and prioritising proposed hydro projects based on their adverse impacts on ecology. The Etalin hydropower project in Dibang Valley is one of over 160 dam projects planned in Arunachal Pradesh. It has attracted particular controversy over its impacts on wildlife and indigenous communities in the dense forests of north-east India. Concerns about time and cost overruns are not unique to the Etalin dam. These issues are common in hydropower projects, particularly in the Himalayan states of Uttarakhand, Himachal Pradesh, Arunachal Pradesh, Assam, Sikkim, Jammu and Kashmir, and West Bengal. According to the Central Electricity Authority’s (CEA) latest quarterly review (covering January-March 2020), many large hydropower projects under construction in these states have cost overruns as high as 200% and delays of up to 13 years. 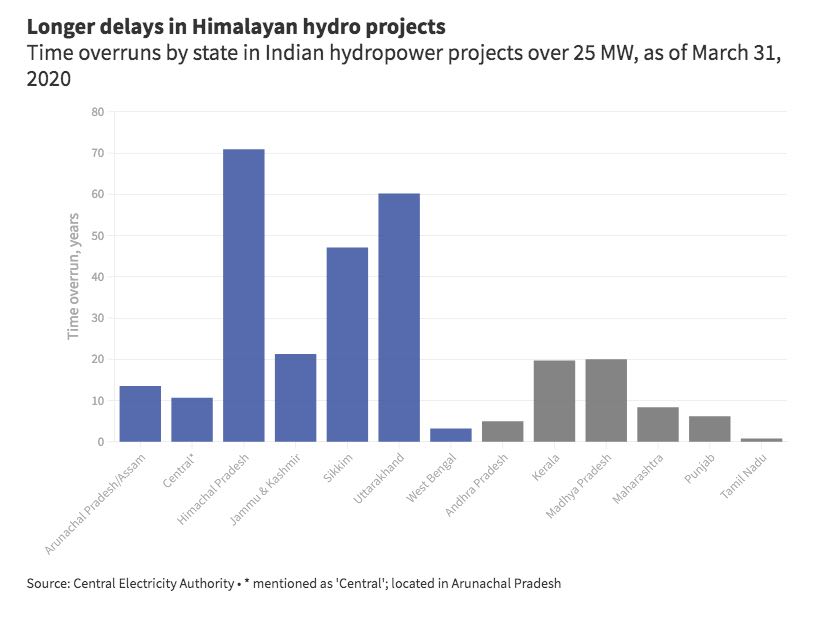 In reality the delays will be much greater, since they only start being recorded once the construction phase starts, ie when the project has received all relevant clearances – which can take years. The Etalin hydropower project, which is yet to receive clearances, was first proposed in 2008. Questions about the economic viability of projects like Etalin are clearly on the radar of the governmental authorities that recommend them. India’s parliament has discussed time and cost overruns of large hydropower projects a number of times. Government supports big hydro No wonder then that Bharat Rohra, chief executive of JPL, noted in May that given the amount of finance the Etalin dam requires, it “doesn’t look like an attractive investment” and sought other investors. Rohra added that since Etalin is a large project, “we feel we’ll struggle to find long-term buyers for the entire capacity but policy support from the government can make the project viable and draw investors.” Yet the Indian government is still promoting large hydropower projects. To encourage investment, last year the government reclassified large hydropower (more than 25 MW capacity) as a renewable energy source, increased the debt repayment period to 18 years and agreed to pay for enabling infrastructure such as roads and bridges for some projects. Experts saw this policy change as partly driven by the need to meet the country’s United Nations commitment to install 175 gigawatts of renewable energy by 2022. JPL has previously tried to wash its hands of the Etalin project. In February 2016, it was reported that JPL asked the government-owned hydropower company NHPC to take over three of its projects. “If the project’s cost is viable then certainly NHPC is ready to take over,” NHPC stated at the time. Since NHPC has not yet taken over the project, does this mean its cost is not viable? The Third Pole sent queries to JPL and NHPC requesting an interview but no response had been received at the time of publication. For full story, go to thethirdpole.net
TAGS Dibang Valley FAC Arunachal Pradesh Jindal Power Limited hydropower Etalin hydropower project Etalin Himalayan Dams Himalayan village