Ahead of the COP 26 conference in Glasgow, UK, the International Institute for Environment and Development (IIED) has found that climate change is causing an increase in migrations in India. The study found high seasonal migrations among those who were impacted by climate change events, such as droughts and floods causing crop damage or cyclones that impacted fishing. The report is titled ‘Connecting The Dots: Climate Change, Migration, And Social Protection’. It is authored by five researchers. It aims to assist policymakers in understanding the needs, issues, and vulnerabilities of climate migrants with data and other relevant information.

"We appreciate that it's difficult to organise the COP amid the pandemic, but it doesn't take away what the challenges could be in terms of representation & inclusivity" - @TKajumba pic.twitter.com/tUpfjrUGDk

Also Read:
In The 'Hunger Year', Indian Foodgrain Exports Made A Killing

Ritu Bharadwaj, senior researcher at IIED at co-author of the study, said, “The scale of climate migration is startling” and that “We cannot afford to pretend this isn’t happening”. India’s marginalized communities and poor people are finding it harder to cope with rising instances of heatwaves, cyclones, and unpredictable rains. She stated what can be considered as the essence of the report: “Droughts, rising sea levels, and flooding are heaping extra pressure onto people who are already struggling to get by, forcing them from their homes in order to survive”. Experts have argued that the recent floods in Uttarakhand caused by heavy rains, and the situation created in Delhi in recent months, can be put down to climate change. (Read Story Here) The majority of the survey’s 1000 respondents were based in Uttar Pradesh, Madhya Pradesh, and Rajasthan. About 70% of the families surveyed as part of the study said that the frequency of droughts has risen in the past 5-10 years, and they are increasingly turning to “distress migration”, being left with no other option for survival. The press release by the IIED says “more than two thirds of households blame drought, floods, heatwaves and hailstorms” for their migration. Climate change is emerging as a definite factor inducing migrations in India even after considering other factors such as educational levels and household size. Climate Shocks A Rising Factor In Migration While the report shows that economic opportunities and marriage remained the main drivers for migration for men and women respectively, climate change is increasingly figuring in the matrix. Droughts in particular were observed to have increased dramatically in all three states. Therefore, “the results indicate that households exposed to drought are more likely than those who are not exposed to have the intention to migrate”. 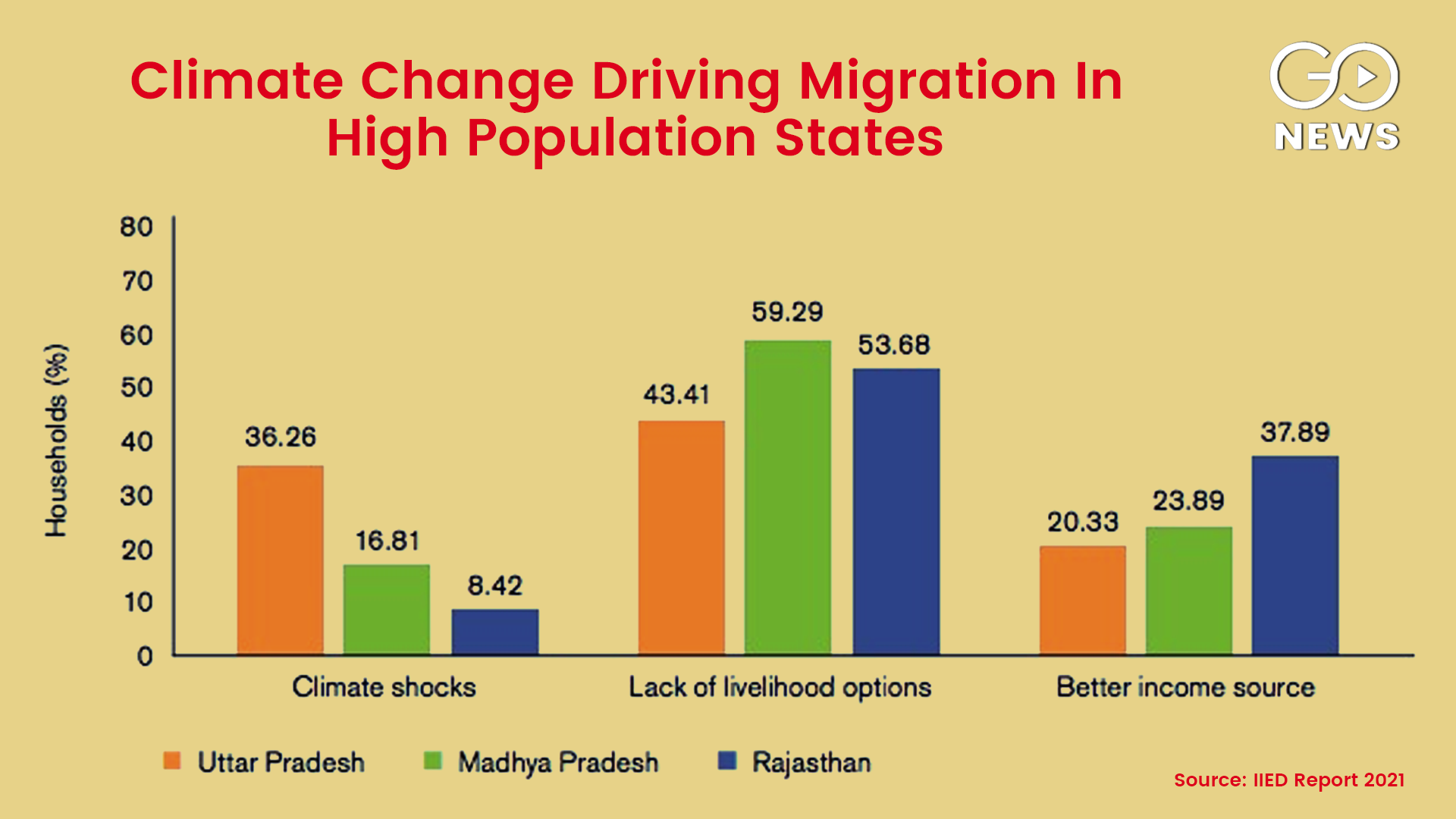 While ‘Seeking employment’ was the main reason for migration in these three states — 94.4% in UP, 95.2% in MP, and 90.6% in Rajasthan, ‘drought’ contributed to 28.3% migrations from Rajasthan and around 8% in the other two states. Most of the remittances from men working outside their place of origin was spent on daily consumption, telling us that the basic survival and needs of these families hinge on seasonal migration. The report says “as many as 35% of respondents in Uttar Pradesh reported that they were not working in their own villages due to climate shocks”. Overall, seasonal loss of income contributed to 5.21% of migrations, being slightly higher in Madhya Pradesh at 7.42%. “Climatic events like drought, flood and hailstorms act as ‘stressors’ and drive individuals/households to accept migration as a survival strategy”. 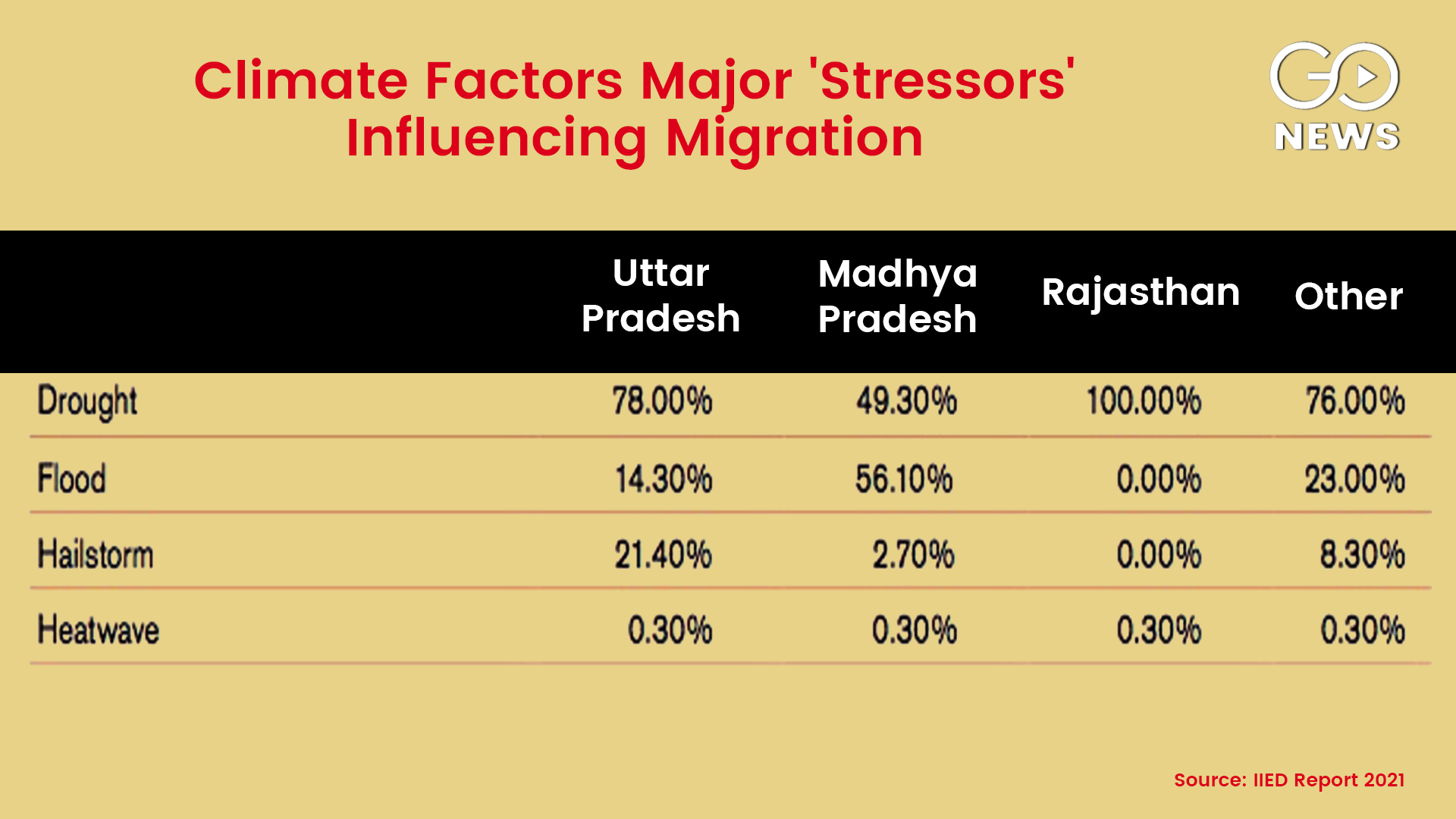 The report also shows that climate change stressors multiply those caused by socioeconomic factors such as lack of education, resources, and employment. Climate Change Displacements Worldwide Problem This situation is common in other developing countries as well. The World Bank’s Groundswell report, 2021, found that 216 million could become internal migrants by 2050, with the most vulnerable region being Sub Saharan Africa. Read the full story here.