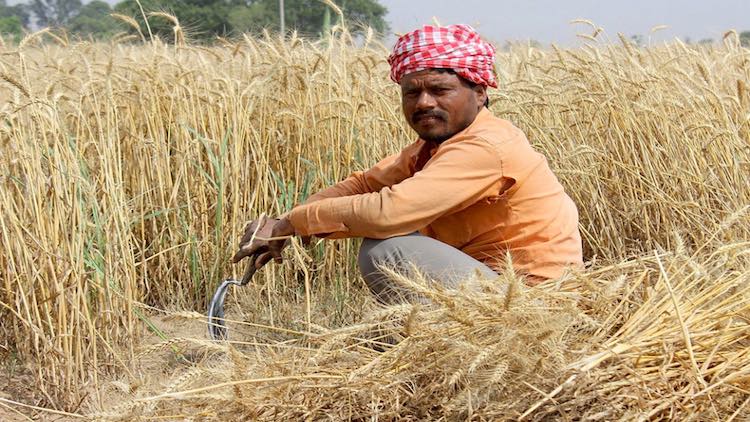 Soumya Sarkar/ thethirdpole.net India’s complete lockdown to contain the spread of the Covid-19 pandemic has upended the agrarian economy of the South Asian nation. It could have a serious impact on farm production in the main summer cropping season, work for which starts in May. Also Read: COVID-19 Cases On The Rise: State-Wise Data

Farmers in India are no strangers to crisis, but the current disruption due to the pandemic is unprecedented. The government must come forward to succour smallholder and marginal farmers in particular through a fiscal stimulus package that should include unconditional cash transfers for poor rural households to tide over the situation, economists and agricultural experts said. Prime Minister Narendra Modi imposed a 21-day nationwide lockdown in March 24, which he extended for another 19 days to May 3.( Which the Centre has now further extended to May 17) Compared to many other countries, COVID-19 numbers are low, and the government says the relative success is due to the stringency of the lockdown. But that has had disastrous consequences for farmers. There are more than 145 million farmers in India, according to the Agriculture Census 2015-16. Assuming five persons to a household, there are 725 million people, or more than half of the country’s population, who depend on agriculture and allied activities for a living. As many as 82% of the farmers are smallholders, Food and Agriculture Organisation data show. It is this massive segment that has been hit the hardest due to the lockdown forced by the Covid-19 pandemic. Even before the lockdown led to labour shortages and brought transportation of farm produce to a virtual halt, farmers were staring at losses in the winter harvest due to unusually heavy rainfall in March that flattened the crop in many locations across the country. In the one province of Uttar Pradesh alone, crops worth nearly INR 2.55 billion (USD 33.6 million) were damaged by hailstorms in 35 districts by the middle of March, affecting more half a million farmers. Much damage done Although authorities declared agriculture an essential service that could continue during the lockdown, much damage has already been done during the lockdown. Stranded trucks on highways were abandoned by drivers and bringing them back is still proving to be a challenge. Long supply chains remain broken in many parts of India, said Satyabrata Acharyya of Professional Assistance for Development Action (Pradan), a grassroots non-profit that works with nearly 850,000 rural households. “Farmers near urban centres are better placed since short supply chains are mostly functional,” Acharyya said. Farmgate prices of fruits, vegetables, milk, meat and poultry have crashed across the country because of lowered demand and logistics restrictions, plunging smallholder farmers into distress since they depend on these for regular cash flow. “High-value agriculture has been badly hit,” said Ashis Mondal, director of the non-porofit organisation, Action for Social Advancement (ASA), which works with 179,000 smallholder farmers in Madhya Pradesh, Chhattisgarh, Bihar and Jharkhand. The sharp drop in demand, erratic functioning of wholesale produce markets and disruption in marketing services have led to vegetable cultivators abandoning as much as 30% of the crop, which remains unharvested, according to reports. This has added to the financial stress among vegetable farmers, a large majority of whom cultivate less than two hectares of land. The poultry sector, which employs some 1.5 million smallholder farmers, has been one of the worst-hit. Demand for broiler chicken and eggs fell precipitously on rumours linking them to Covid-19, according to Avinash Paranjape, founder trustee of National Smallholder Poultry Development Trust. “Small, backyard poultry farms have been dealt a crippling blow and progress made in the past decades have been completely wiped out. Right now, it is uncertain whether smallholder poultry farmers – many of whom are women – will be able to recover at all.” In the initial weeks of the lockdown, the meat trade in the country also collapsed and milk supply was thrown into disarray. “This has caused distress to livestock farmers, who need a continuous cash flow to keep their animals fed,” said livestock expert Sanjeev Kumar, founder of Goat Trust. Rearing goats is like an insurance for poor rural households and not being able to sell them in times of need leaves them short of cash for survival, Kumar said. The intermittent supply of animal feed is adding to the problem. “The government must make livestock feed available to farmers on a priority basis,” Kumar said. “We cannot let livestock go hungry. It will lead to productivity losses that farmers will find difficult to cope with.”

[A herd of goats on the outskirts of Beawar, Rajasthan, during the Covid-19 induced lockdown that has ensured farmers are unable to sell their goats (image by: Alamy)]

Farm input shortages Besides animal feed, farmers are also worried about potential shortages in farm inputs such as seeds and fertilisers ahead of the summer cropping season. More than 60% of the farmland in India depends entirely on rainfall. The main source of rainfall in the country is the June-September southwest monsoon, which would be average this year, the India Meteorological Department predicted in its first monsoon forecast of the year on April 15. It means farmers must prepare their fields and start buying seeds and fertilisers this month. Typically, March, April and May are the peak activity season for seed processors. This has been severely disrupted due to the lockdown. Seed processing is essentially decentralised in India and government agencies manage only a fraction of it. This year, seed processors have not functioned properly. Since local authorities in many parts of the country are restricting movement of trucks loaded with agrochemicals, seeds and fertilisers, there is potential for a shortage of these key inputs for the kharif (summer) sowing season. (This article has been edited to update) For full story, go to thethirdpole.net
TAGS agrarian economy coronavirus pandemic coronavirus outbreak coronavirus COVID-19 shock COVID-19 pandemic COVID-19 Farmers