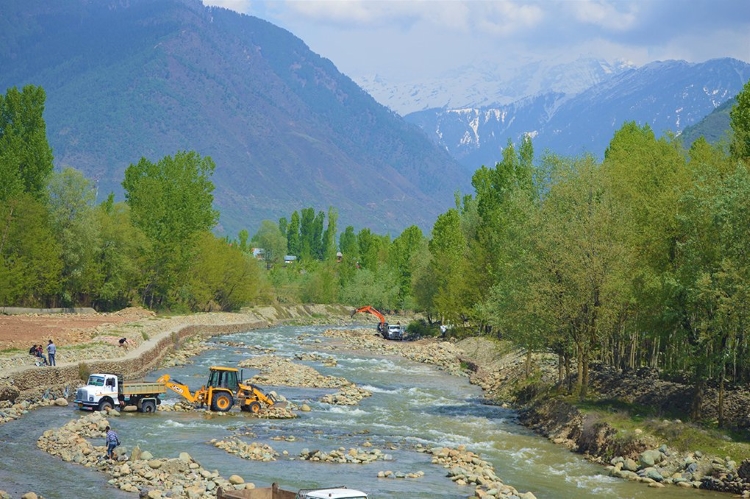 By - Athar Parvaiz/thethirdpole.net Going against its own orders, the government in the Indian Union Territory of Jammu and Kashmir has ordered the fast-tracking of environmental clearances despite manifest evidence of illegal sand mining
Also Read:
UPSC Civil Services Exam Results Announced: 829 Candidates Qualify; Pradeep Singh Tops

A few months after the Jammu and Kashmir government auctioned hundreds of stretches of riverbeds for mineral extraction, companies that won the bids are mining the riverbeds despite the lack of environmental clearance. This makes the mining illegal. But instead of stopping that, on July 30 the government ordered “fast-tracking of environmental clearance”. What is happening in Jammu and Kashmir is part of widespread illegal riverbed mining all over South Asia, which flourishes despite reports by officials, independent experts and the media. Three journalists reporting illegal riverbed mining have been killed over the past five years in India; many others have been injured and threatened. The mining is mostly for sand and rocks used to build houses, roads and so on. In June, the government’s own Jammu and Kashmir Expert Appraisal Committee (JKEAC) pointed out that illegal riverbed mining was going on. Taking note of it, the Jammu and Kashmir Environment Impact Assessment Authority (JKEIAA) – again the government’s own – sought immediate steps to stop illegal mining. Instead, within a week, the government ordered that environmental clearances be sped up. JKEAC is an eight-member group of experts set up by the central government in consultation with the regional government. It assists the three-member JKEIAA set up directly by the central government. Both were set up in August last year. Plans Rejected, Data Absent Since the auctions, JKEAC has either rejected environmental clearance for 80 riverbed mining plans (and 40 brick kilns) or asked for more information. “This, despite a lot of pressure from top government officials to grant environmental clearances to such projects. They are telling us these approvals are needed promptly as there is dearth of construction material such as sand and gravel for infrastructure,” a member of JKEAC told this correspondent, speaking on the condition of anonymity. “But we are trying our best not to clear mining projects in haste. There can be a huge environmental catastrophe if we fail to do our duty,” he said. “In a recent meeting, we informed the government that it should either let us work as we are supposed to work by taking the required time for reviewing these proposals or not ask us to review them at all.” In a meeting held over video on July 23, JKEIAA said, “JKEAC has also expressed concern on the non-availability of any authentic replenishment data, sketchy district survey reports as well as various other issues. Accordingly, JKEIAA accepts following recommendations of JKEAC: 1. Issuance of strict advisories to the Director, Geology & Mining, J&K to check illegal mining without valid EC [environmental clearance] at appropriate level. 2. The Director, Geology & Mining, J&K to conduct replenishment studies of all basins across UT [union territory] proposed for extraction of minor minerals. 3. The Director, Geology & Mining, J&K should complete comprehensive EIA [environmental impact assessment] studies on catchment basis at the earliest.” Government Goes Against Its Wwn Instead, on July 30, the Jammu and Kashmir government issued an order for “fast-tracking of environmental clearance process” for mining operations. It cited “Acute and unprecedented shortage of key material for development works and challenging COVID-19 pandemic” as the reasons for its order. Local residents had expressed concern before the July 30 order was issued. “This is an environmental catastrophe in the making,” said Ashiq, who lives close to the Farozpora river, in the Tangmarg area of Baramulla district in north Kashmir. “In our area, they are operating without any environmental clearances just because they have emerged successful during the bidding process.” The rule says if a company wants to mine more than five hectares in a riverbed, the authorities are supposed to hold public hearings before clearing the plan. Over 70% of the blocks auctioned are over five hectares, but hardly any public hearings have taken place. Delayed by the Covid-19 pandemic, JKEAC is still processing the applications. But the mining is going on; in fact it has accelerated in the lockdown caused by the pandemic, because few officials are on the ground to check. Permits to mine sand, boulders and gravel from the beds of the Jhelum river and its tributaries have been auctioned for five years by Jammu and Kashmir’s geology and mining department. This year, bids were invited from outside Jammu and Kashmir as well, following New Delhi’s decision to scrap the semi-autonomous status of the region on August 5, 2019. Among other things, it means people from outside Jammu and Kashmir are now eligible to buy land and property and do business based on the region’s resources. Most of the mineral blocks auctioned this year have been bought by companies based outside Jammu and Kashmir. “We had advised the government during a meeting in December last year that no mining should be allowed in Jhelum and other rivers till there is a basin-wise scientific mining plan as to which areas should be declared feasible for mining and which areas should be declared as river sanctuaries. It should not be done in a hotchpotch manner,” the JKEAC member said. “Any mining has to be done in a way that it doesn’t cause problems in flood management or functionality of water bodies.” In recent years, Kashmir has faced many floods, notably the devastating floods in 2014 which killed hundreds of people. Read the full article here.