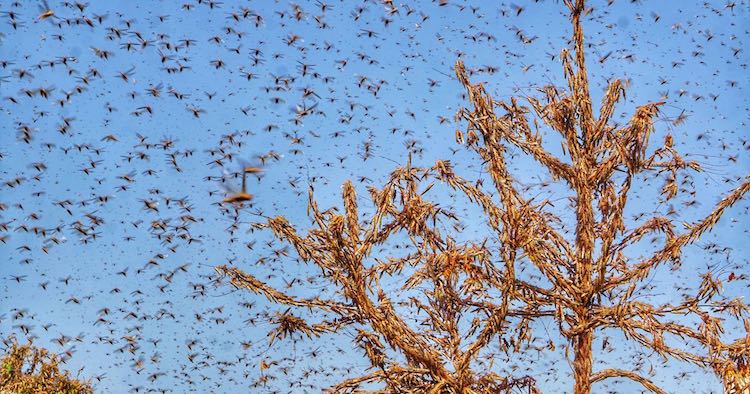 Locust swarms that have traveled thousands of kilometers have now reached the outskirts of Gurugram and Delhi. On Saturday morning a large swarm of locusts was seen hovering over the sky of Gurugram, which has forced people to stay indoors.

The large group of locusts is currently on the Gurugram-Dwarka Expressway and is expected to enter the interiors of Delhi. According to experts, because there are too many trees in Delhi, the national capital is likely to suffer heavy losses.

The Delhi airport has asked all pilots to be cautious about the possibility of a large locust attack so that no mishap happens. People are sharing a lot of videos of the locust attack on social media and are advising people to take precautions.

The locust swarm has already caused considerable damage in the western part of India. Locusts reached Rajasthan via Gujarat, then entering Haryana and now Delhi. According to government estimates, these locusts have destroyed 90 thousand hectares of crops in Rajasthan this year alone.

Received this on a whatsapp group Gurgaon 30 mins back.

A consequence of failure of government response. pic.twitter.com/1fjJtJonUb

Crops standing on about 4,000 hectares in Sriganganagar district of the state and 100 hectares in Nagaur have become the food of these locusts. According to an estimate, there are billions of locusts in a flock and every locust can eat equal to its weight.

According to the Food and Agriculture Organization of the United Nations, an average locust group can eat grains that are able to feed two and a half thousand people. Such locusts can travel up to 150 km a day at a speed of 15-20 km per hour.