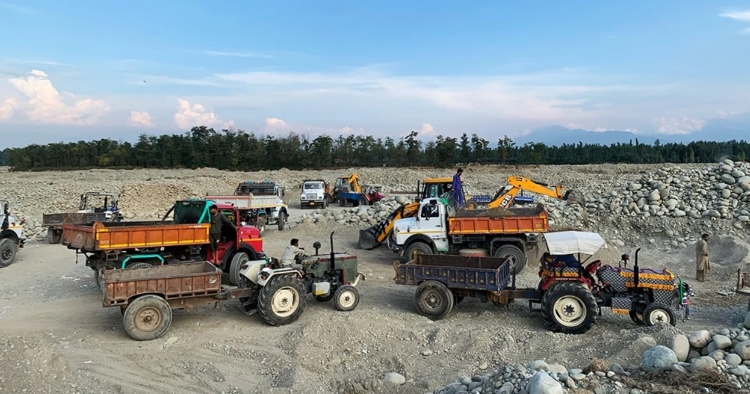 Fisheries experts from Kashmir have warned that unabated mineral extraction from the valley’s rivers, streams and other water bodies poses a grave threat to its important fish industry. The Kashmir valley and its Himalayan rivers are famous for trout, Mahaseer and many other fish species, which support a thriving industry and tens of thousands of jobs in the former Indian state of Jammu and Kashmir. “The government may have to soon declare the famous trout fish an endangered species if immediate steps aren’t taken to stop the unabated extraction of minerals from the rivers and streams of Kashmir,” said Mohammad Nazir Bhat, a resident of Pulwama district in the southern Kashmir. Bhat, who lives near Rambi Ara, a tributary of the River Jhelum in Tahab, in the west of the state, said he sees people extracting truckloads of minerals from the river nowadays. Similarly, in central and north Kashmir, contractors are using heavy machinery to extract mineral deposits from the rivers and streams, destroying important fish habitat and breeding grounds.

Sand Mining Gold Rush Since February, the state government has been auctioning large stretches of riverbeds in Kashmir for mineral extraction. For the first time these contracts have been given to non-local companies, and without proper environmental clearance. This makes the mining illegal. But instead of stopping that, on July 30 the government ordered the “fast-tracking of environmental clearance”. On August 5, 2019, the Indian government fundamentally altered the aspects of autonomy granted to the disputed region and split the state into two union territories: Jammu and Kashmir and Ladakh. Laws under Article 370 of the Indian Constitution had previously barred non-locals from leasing and renting the mineral blocks in the Indian-administered region. In the past year the majority of bids on blocks to mine sand and minerals have gone to outside companies and mining has surged. Fish Under Threat This large-scale riverbed mining poses a big threat to the aquatic life and ecosystems of rivers and streams across Kashmir. Excessive sand mining can disturb river channels, food systems and fish populations. It can even alter the riverbed, force the river to change course, erode banks and lead to flooding. Fisheries experts warn that outside contractors reportedly use heavy machinery to extract the minerals, destroying fish-breeding grounds and disturbing ecosystems. Before the revocation of the region’s special status, Kashmiri labourers would extract minerals manually, while non-local contractors have reportedly used machines including JCBs.

Heavy machinery is being used to mine the riverbeds [image by: Shabir Bhat]

“Unchecked/unplanned exploitation of land resources in J&K may have far-reaching consequences on our water resources and fish biodiversity, which are very important for maintaining good human health,” said M.H. Balkhi, dean at the Faculty of Fisheries, Sher-e-Kashmir University of Agricultural Science and Technology (SKUAST) Kashmir. Balkhi said that development schemes must go hand-in-hand with biodiversity conservation in rivers that are home to fish, including commercially important snow trout. “Each such scheme must have an Environment Impact Assessment component for safeguarding aquatic resources and fish biodiversity to maintain a healthy ecosystem,” Balkhi said.  Mining destroys fish-breeding grounds and reduces fish populations. It also leads to water pollution, which affects the quality of food for the fish, said Balkhi. F. A. Bhat, an associate professor at SKUAST-Kashmir, said the Kashmir snow trout and other trout species need crystal-clear water and are very sensitive to any kind of pollutants. “Most of the fish of Kashmir are bottom feeders and lay eggs on the bottom [of rivers and under boulders]. Mining will surely affect the feeding and breeding grounds of these fish, which will ultimately affect the production of fish,” Bhat said.  Bhat, who is a snow trout expert, claims that the fish are already getting smaller because of environmental constraints. “Three to four decades ago snow trout would reach up to 10 kg, now it is a maximum of 2-3 kg,” he said. Fisheries Department Helpless On July 10, the Fisheries Department of Jammu and Kashmir raised its concerns in a letter to the principal secretary of the government’s Department of Fisheries. In the letter, which The Third Pole obtained a copy of, state officials wrote: “The illegal, unscientific and rampant extraction of bed material like sand, Bajri, boulders etc. from these natural water bodies have also led to annihilation, extinction and extermination of fish biota from these habitats due to ecological imbalance without consideration of Environmental Action Plan. Moreover, the trenches/pools so created by mechanical extraction acts as mortality ditches in which the fish particularly the juveniles get trapped and thus cause substantial damage to the existence of fish species.” Mohammad Amir Mir, director of the state’s fisheries department, said it has not yet received a response from higher officials. Livelihoods Hit According to a news report, Jammu and Kashmir produces 20,000 tonnes of fish each year while 93,000 people depend on fisheries for their livelihood in the state. The state department of fisheries plays an important role in generating employment by establishing fish-rearing units, which require high-quality water. According to the department, 534 trout units have been established in the private sector. On top of this, 17,398 families earn their livelihood by catching fish.

There is a thriving industry for brown, snow and rainbow trout, among other important species like Mahaseer and carp [image by: Jammu and Kashmir Fisheries Department]