Siachen Glacier Is Turning Into A High-Altitude Dumping Site

With no means to bring back waste from where troops are deployed on the Siachen glacier, the place is becoming a mountain of trash, reports Athar Parvaiz

The Siachen glacier is often referred to as the world’s highest battlefield, where Indian and Pakistani troops have faced off since 1984. During the years the trash accumulated by the long deployment has slowly built up, and lies in the crevasses of the glacier, and on its surface. Porters and soldiers interviewed by thethirdpole.net said that there was no mechanism to remove it on the Indian side. “Only soldiers return, if they are lucky, and their ammunition from Siachen. And also some dead bodies. Everything else remains there,” said Lobzang Stobzan, a senior porter who has recruited porters for Siachen since 1984 at Panamik, one of the last three villages near the Siachen Base Camp in the Karakorum Himalayas. “How can the waste be brought back by porters? Trekking the distance between the glacier and the base camp takes four days.” 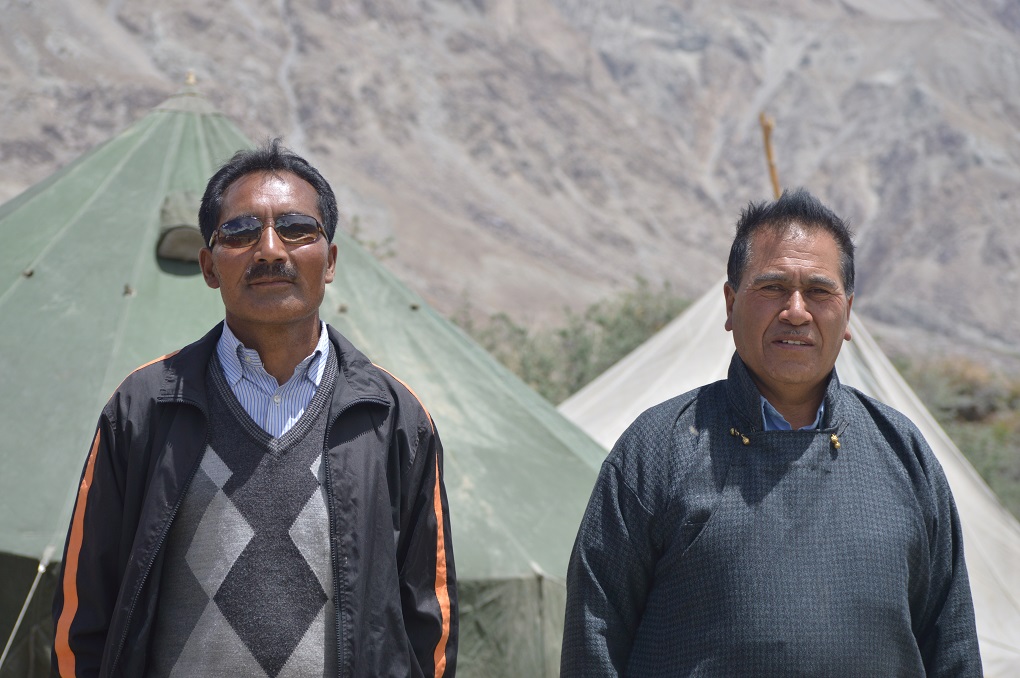 (Chief porter at Siachen, Lobzang Stobzan (right) and porter Thukjay Lotus. Porters play an important role in distribution of supplies to armny posts in Siachen. image by: Athar Parvaiz) Siachen, which figures among the world’s largest mountain glaciers, is on the Line of Control (LoC), which marked the ceasefire line after the 1947-48 war between the two countries in their first war. The glacier is claimed by both India and Pakistan, with a large deployment by both sides. A ceasefire has been in place since November 2003, with Indian troops stationed on the upper part of the glacier and Pakistani troops on the lower part. Getting essential supplies to the military posts in Siachen, with some of the Indian posts over 6,700 metres high, is costing both the countries hundreds of millions of dollars. For example, from 2012 to December 2015, India spent INR 75 billion (USD 1 billion) on rations and clothing of soldiers as per official figures from the Indian government. India uses helicopters for dropping the supplies, while Pakistan, whose positions are closer to the road heads, uses porters and mules for taking the supplies to its positions.

` Filthy glacier melts faster Sonam Rigzin, 45, has been working as a porter at Siachen since 1990. A lot has changed over these years, he said. “When I first visited the glacier in 1990, I vividly remember we had trekked over the glacier right from the base camp. Today, we walk over pebbled path for three kilometres from the base camp as the glacier in those three kilometres (from Baba Mandir) has vanished,” Rigzin told thethirdpole.net at Panamik village. “I think it has melted because many people walk over it and stay there,” Rigzin said. According to Rigzin, there is “too much” pollution in the glacier as there is no way porters or soldiers can carry the trash back. “At the base camp, the army has made a big box (incinerator) for burning the trash two years ago. Now, most of the waste generated at the base camp is burnt in that though a lot of waste still ends up going into the stream (Nubra or Siachen River, a tributary of the Indus) flowing near the base camp. But the waste generated at Siachen stays there only. No one has carried even a single piece of trash back,” Rigzin said. Courtesy: thethirdpole.net For Full Story, Click Here