Six Months, Two Cyclones, One Island: A Tale Of Destruction In West Bengal 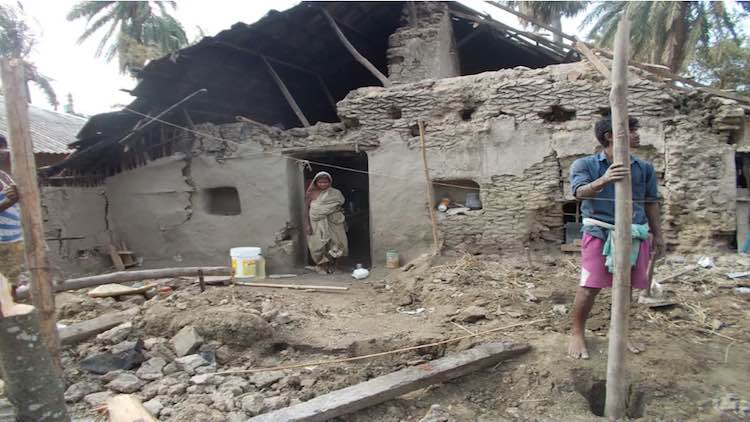 By Jayanta Basu/thethirdpole.net Cyclone Amphan made landfall on May 20, 2020, at latitude 21.65 degrees north, longitude 88.3 degrees east.
Also Read:
Punjab Pump Dealers On Strike Due To Increased VAT; One Commits Suicide

Cyclone Bulbul made landfall on November 9, 2019, at latitude 21.55 degrees north, longitude 88.5 degrees east. Mousuni is a small island in West Bengal, India, at latitude 21.66 degrees north, longitude 88.30 degrees east. The island is located in the southwestern corner of the Sundarbans, the world’s largest mangrove forest on the shore of the Bay of Bengal. On the north, east and west, Mousuni is separated from the mainland by two distributaries of the Ganga, Chinai and Muri Ganga. To the south is the sea. The majority of its roughly 30,000 residents live in mud huts, with roofs made of thatch, tiles, tin or asbestos. Traditionally, they farmed rice and vegetables in one of the world’s most fertile deltas. They made considerable money growing betel leaves (paan). They bred freshwater fish in ponds. Those who did not own land worked as farm labourers. The women would search for shrimp fry in the brackish water, which they sold to aquaculture farms. The first big shock came on May 25, 2009, when Cyclone Aila made landfall at latitude 22.00 degrees north, longitude 88.00 degrees east. Like Amphan and Bulbul, the wind caused by Cyclone Aila blew away roofs, flattened huts, felled trees and electricity poles. The waves topped six-metre-high embankments and flooded farms and ponds with saline water, killing plants and freshwater fish. Since then, the land has been unable to support all its people. At least one man from just about every household in Mousuni has had to find work elsewhere in India – as labourers in factories, construction sites or farms; as security guards, gardeners, rickshaw pullers, restaurant cooks and waiters and managers. The remittances Mousuni’s emigrants sent not only supported their parents, wives and children. In some cases, they enabled a change from mud to brick walls for the home, from thatch to a tin or even asbestos roof. With the promise of these remittances, many residents who lost their roofs or walls to Cyclone Bulbul last November borrowed to rebuild. But the remittances came to a sudden halt at the end of March, as millions of informal wage earners lost their incomes due to the lockdown forced by the Covid-19 pandemic. Their desperate journeys to get back to their home villages exhausted all their savings. And then came Amphan, with Mousuni in the eye of the storm for the second time in just over six months. “The [landfall] points are quite close,” said Sanjib Banerjee, deputy director-general at India Meteorological Department’s regional centre in Kolkata. “Bulbul’s landfall point seems to be around 20 km east of Amphan’s landfall,” observed GK Das, director of the centre. As the crow flies, or the wind blows, Amphan, Bulbul and Aila all made landfall within 25 km of Mousuni. “It’s an extremely rare event and underlines the acute vulnerability of the area,” said Anurag Danda, senior fellow at think-tank Observer Research Foundation who has worked with the people of Mousuni for decades. Dark, broken homes Cyclone Amphan toppled around 1,750 electricity poles in Mousuni, as well as the main tower through which India’s electricity grid reached the island. Engineers estimate it may be months before the power lines are restored. Meanwhile, people have gone back to lanterns and the few solar microgrids that preceded the arrival of the national grid. The picture is bleak for homes hit by the double blow. “Our house was badly damaged during Bulbul. We had just finished repairs. Then Amphan blew it away,” said Muslima Bibi, a resident of Baliara, Mousuni’s southernmost village. Ranjita Mondal, from the adjoining village of Kusumtala, also lost her house twice. Sheikh Mantaj of Kusumtala said, “I am about 75 and when Bulbul hit last November, I thought that I had seen the strongest cyclone in my lifetime, but within six months, Amphan came. I do not know what more is in store for us.” “Most of the large trees were uprooted by Bulbul. So Amphan directly hit the mud houses built in the shade of those trees. This maximised the impact and damage,” said Saral Das, a local community worker. For full story, go to thethirdpole.net