The Destructive ‘Greening’ Of The Thar Desert In India 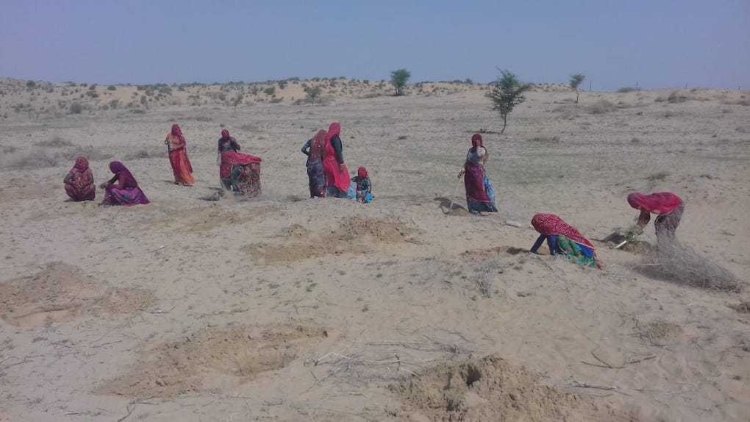 Ravindranath lives in the heart of the Thar desert in India. He and his family are agropastoralists – people who grow crops and rear livestock – in the village of Kalu in Bikaner district, Rajasthan. But the dry grasslands that people like Ravindranath have depended on for centuries for pasture are slowly being depleted. “Sometimes we have to pay money and buy cattle feed [instead of grazing our animals],” he said. Debulal Bawri, a gram panchayat (village council) officer for Kalu, explained that in Bikaner and other districts in the state of Rajasthan, “rainfall has become unreliable and [herders and farmers in the area] rely a lot on monsoon rainfall.” As of August 17, this year’s monsoon in Bikaner is 23% deficient in rainfall. “Monsoons have been erratic [in this region] over the past few decades and pasture productivity is dependent on good monsoons,” said Sutirtha Dutta, a research associate at the Wildlife Institute of India (WII). A “good monsoon” in Bikaner means between 200-300 millimetres of rain between June and September. More erratic monsoons mean there is often a high amount of rain over fewer days. Another problem, Bawri said, is that “many buildings are coming up on pastures”. Rewant Jaipal, a programme manager at NGO the Urmul Trust, said that pastures across Bikaner are shrinking due to the growth of agricultural farms and the expansion of built-up areas because of population changes. But there is hope to arrest the decline. In December 2019, efforts began to revive pastures in Kalu, as well as the villages of Kelan, Dhani Bhopalaram and Rajasar Bhatiyan in Bikaner. The project focusses on planting trees such as ber, khejri and moringa, and grasses like sewan and daman on grazing land. In cases where local grasses like sewan, daman and phog are already present, the programme ensures that they remain in the landscape, said Jaipal, who has been leading efforts on the ground. The initiative is part of a programme by the National Rainfed Area Authority. It is being coordinated by India’s Union Ministry of Agriculture and Farmers Welfare, the United Nations’ Food and Agriculture Organization and the Urmul Trust, with support from the Desert Resource Centre. Ravindranath is employed by the programme under the Mahatma Gandhi National Rural Employment Guarantee Act, 2005. This legislation guarantees 100 days of employment per year to every rural household in India. “The work that we are doing today… I have a feeling that we will see its benefits in the next few years,” he said.

Programmes under rural employment guarantee schemes are being used to restore desert ecosystems in the Thar [image by: Rewant Jaipal]

Chetan Misher, a PhD scholar at the Ashoka Trust for Research in Ecology and the Environment (ATREE), said that restoring grasslands is beneficial for both pastoralists and biodiversity. Misher stressed that while tree species like ber and khejri are native to the region and have evolved to survive with historically scant rainfall, the same is not true for non-native ones like moringa. “During monsoons, we hardly get 15-20 days of rainfall and this year has been worse,” he added. Other experts also warn that moringa, which might not survive in the region, should not be planted because it is not native. Dutta, from the WII, also supported the planting of native vegetation. He said that native grasses and shrubs like sewan and capparis in low densities can support livestock while maintaining the integrity of the desert ecosystem. But this restoration effort is an exception. The Thar is a victim of unscientific practices that have destroyed pastures.

Colonial Policies Devastated The Thar “The Thar is a climatic desert,” said Ninad Munagi, another researcher at the WII. This means that the region is very hot, with very low precipitation. Historically, policies have sought to “green” the desert and its surrounding areas via cultivation and plantations. This was rooted in the thinking that deserts were inherently “unproductive”. Colonial rule was focussed on higher revenues, and farms were easier to tax.

Historically, policies have sought to “green” the desert [image by: Rewant Jaipal]

Under British colonial rule in the 19th and 20th centuries, Dutta said, irrigation was introduced to turn arid and semi-arid ecosystems into cropland. The right to graze animals was limited to those who owned the land and used it to cultivate crops. “This is how nomadic pastoralists turned into sedentary agropastoralists,” Dutta said. The problem, Misher said, is that “greening started with people thinking, ‘How do we make deserts productive?’ not, ‘Let’s understand what a desert is.’” “Planting trees in deserts is as bad as cutting trees in a rainforest since it changes the basic nature of the ecosystem,” said Abi Vanak, a senior fellow and convenor at the Centre for Biodiversity and Conservation at ATREE. He added that the purpose and scale of plantation activities should always be scientific and specific. Greening has largely occurred on arid scrub savannahs that also functioned as pastures. As well as hurting herders’ livelihoods, many species of animals and plants that have adapted to such climates are now threatened. The trend is also linked to recent locust outbreaks, as large quantities of vegetation provide food for locust swarms. The greened areas act as pit stops in deserts, allowing them to reach previously unfrequented regions like Delhi, Maharashtra and Madhya Pradesh. Though such greening is not a new phenomenon, the rate has picked in the past few decades. To read the complete article, click here.
TAGS Environment Grasslands Greening Rajasthan Thar Desert