By Soumya Sarkar/thethirdpole.net More and more women in this climate-hit region of Maharashtra are feeding their families and making money through diversified organic agriculture Also Read: FM Sitharaman: Dip In GDP But No Recession

Marathwada is the epicentre of India’s agrarian crisis. Farmers in this dry region of the western province of Maharashtra have been killing themselves over wilted crops and impossible debts. Erratic rainfall and rising temperatures due to climate change have added to the distress. Smallholder and marginal farmers are the worst-hit. Farmers in this parched land continue to cultivate water-guzzling soybean, cotton and sugarcane, and when landholdings are less than five acres, they have no fallback at all if the crop fails. Usha Pade came to Pimpri village of Kallam administrative block in Osmanabad district as a young bride to Sideshwar in 2001. Her husband owned a small patch of land where on one acre he tried, and mostly failed, to grow some sugarcane. The remaining three acres in this parched section of Marathwada remained unused.

(Women farmers have led from the front to adopt organic farming practices/image by Swayam Shikshan Prayog) “We had no option but to work as labourers in other people’s farms,” recollects Pade. “We worked in the farms from sunrise to sunset. When my first daughter was a toddler, I had to carry her while working. Sometimes, we were so tired that we couldn’t make it back home and used to sleep in the field.” For all their toil, Pade and her husband were paid as little as INR 50 (USD 0.70) per day. Life held out very little hope for Pade, now 35 and mother of two daughters and a son, if it had not been for a fortuitous association with Swayam Shikshan Prayog (SSP) in 2014. The Pune-based non-profit was at that time trying to empower women farmers through various farm and non-farm initiatives in many districts of Marathwada. Organic convert Pade joined an SSP workshop and was immediately convinced to join an innovative farming initiative that relied on multi-cropping on a small plot of land without using any chemical inputs. She started cultivating a few varieties of vegetables on half an acre of her land and started a vermicompost pit (a form of composting using various forms of worms, mainly earthworms). Although the results were not too encouraging in the first season, she persisted and gradually brought her family’s entire four acres under diversified organic farming. Today, Pade can be held up an example for women farmers all over Marathwada and beyond. “I’m harvesting four crops a year and earning at least INR 250,000 (USD 3,500) every year after feeding my family properly,” says a beaming Pade. She has become adept at cultivating a variety of crops ranging from okra, tomato, fenugreek, pigeon pea and coriander, and has started earning extra from a small papaya plantation as well. 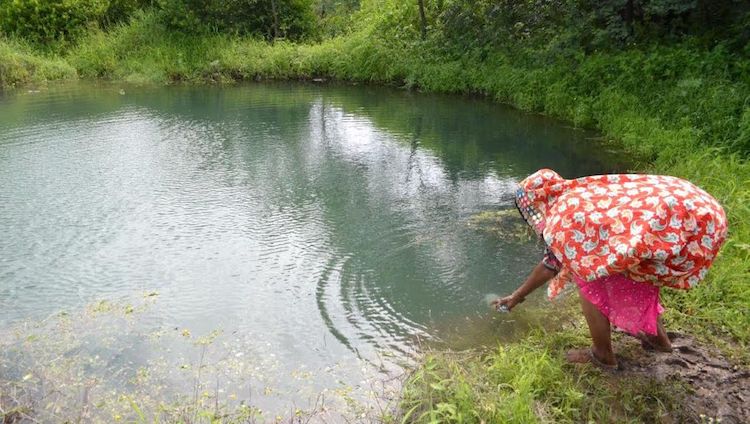 (Rainwater harvesting and farm ponds play a big role in climate-smart farming/image by: Swayam Shikshan Prayog) This is a remarkable achievement given that Marathwada continues to make headlines for its farming crisis. The region suffered from five years of consecutive droughts between 2012 and 2016, which has rendered agriculture unviable, especially for smallholder and marginal farmers. In a desperate attempt to earn some profit from diminishing resources, farmers are still growing water-hungry crops in this parched area and using ever more chemical inputs, resulting in not just loss of income but also soil fertility. For full story go to: thethirdpole.net
TAGS Marathwada gender maharashtra India Climate Change Agriculture