In its press release summarizing the report’s key findings, Juergen Voegele, Vice President of Sustainable Development, World Bank, says: “The Groundswell report is a stark reminder of the human toll of climate change, particularly on the world’s poorest—those who are contributing the least to its causes.

A day after the United Nations stated that environmental threats are the “greatest challenge to human rights”, the World Bank released its latest Groundswell Report in which it says that 216 million could become internal migrants by 2050, with the most vulnerable region being Sub Saharan Africa.
Also Read:
Post Pandemic Economy - India Dilutes Public Sector, China Consolidates

In its press release summarizing the report’s key findings, Juergen Voegele, Vice President of Sustainable Development, World Bank, says: “The Groundswell report is a stark reminder of the human toll of climate change, particularly on the world’s poorest—those who are contributing the least to its causes. It also clearly lays out a path for countries to address some of the key factors that are causing climate-driven migration” Shown below is the regions of the world that are projected to be affected by climate-driven migrations and displacement 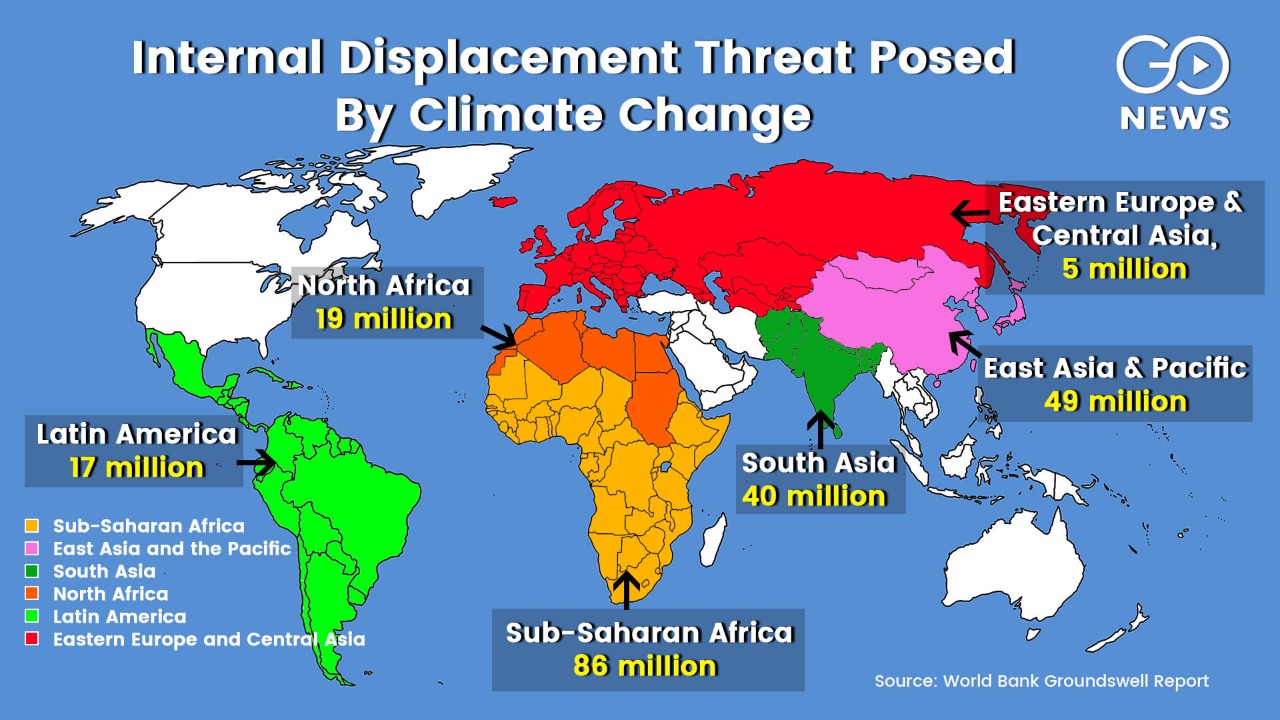 The key factors that will drive migration due to the impact of climate change are water scarcity, lower crop production, and sea level rise and storm surges. The habitability of other regions will be reduced due to heat stress, extreme weather events, and land loss. The report uses a modelling based on three scenarios named: Pessimistic (high emissions, unequal development), More Inclusive Development (high emissions, moderate development), and More Climate Friendly (low emissions, unequal development). The scenario-based approach projects different kinds of future outcomes based on uncertain possible changes such as local climate conditions, or changes in society, politics, and technology. This scenario-based approach is an attempt to make the projections of the report more realistic by adjusting for unforeseen and unpredictable elements that may be unique to regions and nations. For the south Asian region that includes India, between 30-40 million internal migrants are projected in the most pessimistic scenario, i.e., with unequal development and high emissions, while the lowest number is put down to between 10-20 million in the case of low emissions and moderate development. (More Climate Friendly). Other threatened regions include Sub Saharan Africa with the best and worst case scenario projecting almost 30 million to 70 million internal migrants, followed by East Asia & Pacific region with more than 30 million in the worst case and 20 million in the best case scenario. report cites data from the Internal Displacement Monitoring Centre (IDMC) to say that 40.5 million people were displaced in 2020, “of which 30.7 million were triggered by disasters”. The vast majority of these weather disasters were storms and floods. Most of the new displacements took place in East Asia and the Pacific (12.1 million) and South Asia 9.2 million). The World Meteorological Organization also release its report recently that showed that weather disasters have been the highest and most damaging now than any point since the 1970s. The chief culprit of death and destruction in that report was put down to water-based disasters as well. The IDMC says that at the end of 2020, there were 55 million people living in displaced conditions. 48 million were displaced because of conflict and violence, and 7 million due to weather-related disasters (12.72%).

The COVID-19 pandemic has further complicated the migration and livelihood options of those most affected by climate change. The report cites Cyclone Amphan which hit Bangladesh and Eastern India, particularly West Bengal in May 2020, as an example of people not being able to leave risk-prone areas, and the increased complication of relief efforts “by the need to follow strict precautions to prevent the spread of COVID-19.” The report lists seven international level policy frameworks that are made to integrate mobility and migration within the context of climate change. These are: On 13th September 2021 (Monday), the UNHRC chief Michelle Bachelet said that environmental threats pose the greatest challenge to human rights, as climate change increases conflicts around the world and countries fail to take necessary action. She said that these threats were already “directly and severely impacting a broad range of rights, including the rights to adequate food, water, education, housing, health, development, and even life itself”. The Groundswell report, along with many others repeatedly show that the poorest countries who contribute least to global warming will suffer the most from its effects.