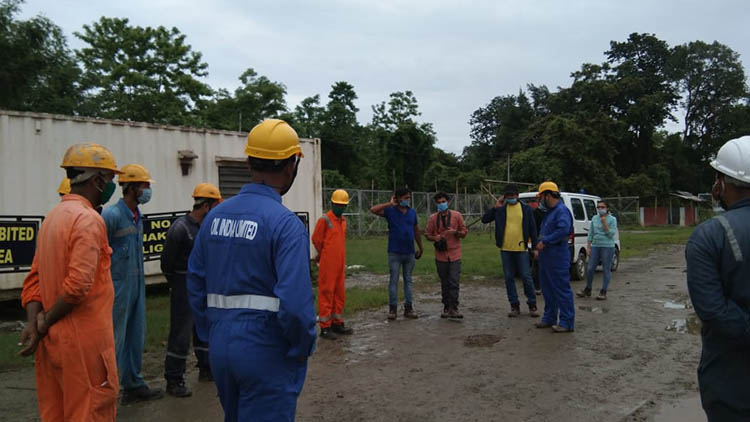 By Anasuya Basu Ratul Bora, a resident of the sleepy village of Borburi in Upper Assam’s Tinsukia district has seen many television media teams and press photographers filming the Bagjhan gas well blowout on May 27. However, he got curious when over 45 days later, he saw a film crew of three equipped with camera and gadgets and Oil India officials filming the oil fire, which still continues to rage.
Also Read:
Netflix Warns Of Slowdown Despite 10 Million Subscribers' Surge During Lockdown

Bora made some enquiries and found that the team had come from Delhi and was from Discovery Communications. That’s when locals began getting anxious. These people were outsiders at a time when COVID-19 cases are on the rise and all travellers from outside Assam are to be kept in the mandatory 14-day quarantine. How, and with what consequences, was complete unfettered access granted to the media team to the blowout site and their subsequent mingling with Oil India staff and local residents? This writer found that the Discovery Channel team of Shivam Anil Poddar, Mohit Kakodkar and Umang Chaudhury arrived in Dibrugarh on an Indigo Airlines flight (6E6889) from Delhi on July 13 and have been lodged at the Oil India guesthouse in Duliajan without being kept in a government designated quarantine facility. In fact, a letter by HC Bora, CGM Administration, Oil India Limited, dated July 13 to the Deputy Commissioner (DC) of Dibrugarh, said that since the matter is of great urgency the trio should be excused from the general quarantine norm and be allowed to complete filming in Baghjan for a documentary on the gas well blowout. 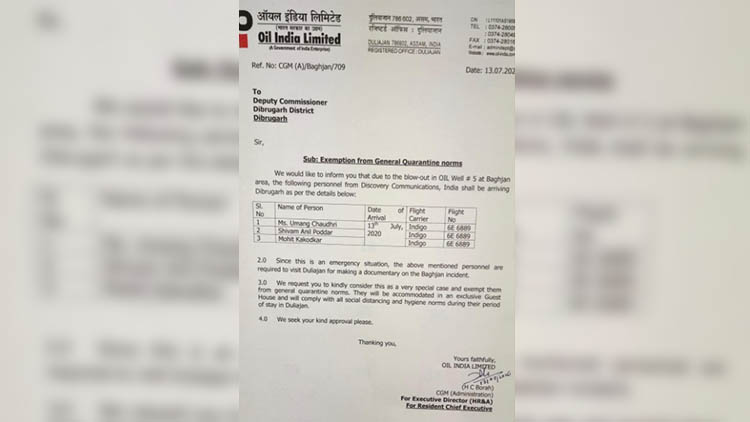 On July 17, Shivam Poddar tested positive for coronavirus. A list of coronavirus test results released by the office of Joint Director of Health Services, Dibrugarh district, Naba Gogoi, has Poddar’s name (serial number: 531) on it. Oil India gave out a rather strange explanation on July 17 after Poddar’s test result came in saying that a five member team, including a woman, came to Duliajan on July 4 for the shooting and had tested negative for coronavirus and that the team has been kept in quarantine in the Oil India guest house since that time. However, the letter to the DC, Dibrugarh and images of the team busy filming belies the Oil India spokesperson’s claims.

The All Assam Matak Sammelan (apex body of the ethnic community of Tinsukia district in Upper Assam) working president, Saroj Gohain, said that “Oil India is introducing corona super spreaders in the area and has no concern for the safety of its own staff and people of the area”. Gohain has demanded a high level enquiry into how the team was allowed to be exempted from quarantine. The manufacturing of tea has been affected in at least 50 gardens in Tinsukia and Dibrugarh districts because of disruption of gas supply and protests by local organisations ever since the gas blow out, which are demanding compensation for the displaced, many of whom work in the tea industry. Now, this incident of the presence of a filming crew with a coronavirus positive member not adhering to quarantine norms has caused widespread disconcertment and fear of rise of coronavirus cases in the area.