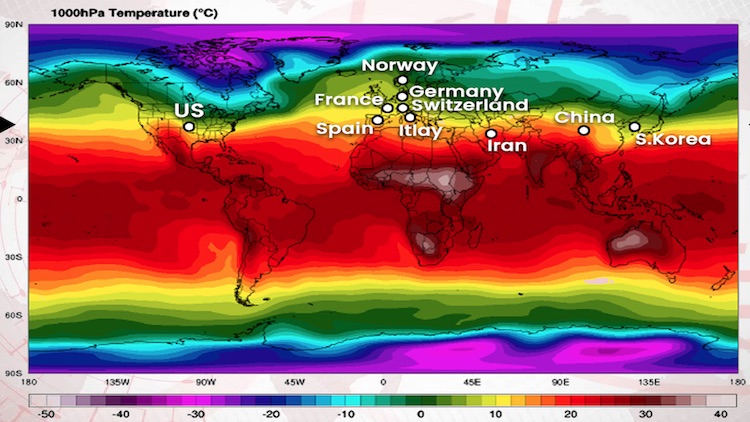 With panic setting in all over the world due to the Coronavirus pandemic, there’s a strange sort of relief to be found in seeing the data compiled by America's Johns Hopkins University and Maine University, which indicates that India is likely to weather the COVID-19 onslaught due to its relatively warmer climes in relation to the path of progression of the coronavirus since December. A recent study by Maine University mapping the COVID-19 outbreak climate pattern suggests that the virus wreaked havoc in such regions where the temperature in the last three months was between 5-11 degrees Celsius.

Several experts have pointed out that the weather is definitely a deterrent to the virus spread in India.

As many as 92 percent cases were reported from 10 countries alone, which had a similar temperature range.

As can be evident from the maps, the Southern Hemisphere, which was in the middle of the summer when the outbreak took place. shows an almost insignificant prevalence of the disease. It is noteworthy that people living in countries where temperatures recorded were over15 degrees Celsius contracted COVID-19 only when they travelled to countries with low temperatures or when they came into contact with people who had been to such countries. New coronavirus cases are also emerging from cold weather regions such as those in Europe and parts of the US and there are uncanny similarities between the temperature ranges of Wuhan, Milan and Seattle, cities which have been majorly affected by the virus' spread. As we cross mid-March, temperatures are rising in the southern part of China and therefore, the rate of new cases is also dipping.  In India as well, it is predicted that from next week onwards, the mercury will start shooting up, which will help combat the spread of the coronavirus. The virus has so far infected 1.45 lakh people across the world. Two Indians have died owing to the viral disease and 90 cases have surfaced in the country so far. It is hoped that with a strong containment effort and quickening advent of summer, India will be spared the worst of the COVID-19 onslaught.   Also watch: Weather Channel's 'Spring and the Coronavirus'
TAGS US Europe India climate cold-weather regions John Hopkins University Maine University temperature coronavirus onslaught Coronavirus in India coronavirus outbreak coronavirus COVID-19 climate pattern