Activists Tense Ahead Of 'Aurat March' In Lahore On Women's Day 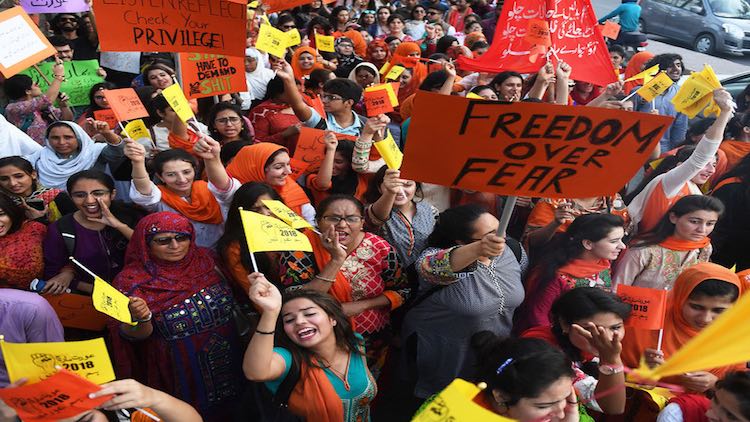 Tension prevails as activists gear up for the massive 'Aurat March' in Lahore and other Pakistani cities on the eve of International Women’s Day on Sunday. Women across Pakistan have faced and continue to face all sorts of opposition and backlash from the conservative groups for taking part in ‘Aurat March’. Some even filed a petition demanding to restrict the march, however, the Islamabad High Court (IHC) dismissed the petition.
Also Read:
We Have To Start From Ball One - Harmanpreet Kaur

This year the manifesto revolves around the economic justice for women and their independence. But it was the rallying cry ‘mera jism meri merzi or my body, my choice' in 2019 which touched a nerve and continues to cause controversy.  Last year, the organisers and participants of the 'Aurat March' faced backlash and online threats for “violating Islamic principles" and “disrespecting women". Most critics had issues with the placards and banners used during the march, which they said transgressed Pakistan's cultural values. Since its first iteration in 2018, the ‘Aurat March' was organised to coincide with the International Women's Day by Hum Aurtain (We the Women)  – a feminist collective — in Lahore and Karachi.  The idea began with a handful of women wanting to mobilise their networks to ask for an end to violence and harassment. Since then, it has grown into a wider movement, including transgender people, demanding better laws to protect women. Nighat Dad, founder of Digital Rights Foundation and one of the organisers of the march, was quoted as saying, “The agenda of the march was to demand resources and dignity for women, for transgender community, for religious minorities, and for those on the economic margins, but more importantly, to acknowledge that women’s emancipation is inherently linked with improvement of all mistreated groups and minorities”. Manifesto Its manifesto demanding basic rights for women in each field of life is as follows.