Amid The War, Here Is The Food Dependance Of African, Arab Countries On Russia And Ukraine! 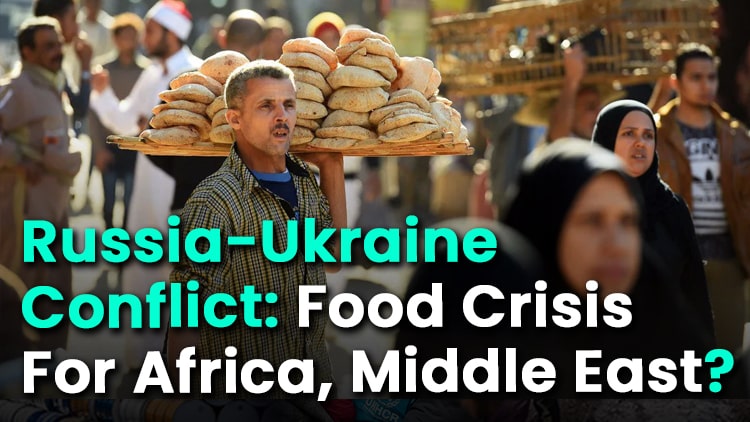 The ongoing conflict between Russia and Ukraine which has entered its 26th day now has wide-reaching implications for commodities and essentials across the world. Russia and Ukraine are collectively known as the ‘bread basket’ of Europe and are significant suppliers of wheat, sunflower products, and other foodgrains to the Middle East and Africa.  As seen from the following chart, several countries in Africa are significantly dependent on Russia and Ukraine for their food supply needs, similar to Europe’s energy dependence on Russia which has prompted the IEA (International Energy Agency) to call for measures to cut back on oil usage.
Also Read:
Russia Demands Mariupol Surrender As UN Reports 2,361 Civilian Casualties In Conflict

The map depicts some countries in Africa with the highest dependency on Russia and Ukraine for wheat requirements: Major Spike In Global Food Prices Amid Conflict! The Food and Agriculture Organization (FAO) had stated in a report dated March 11th that food prices were at a record high, spiking sharply since the escalation of the Ukraine crisis. In February 2022, the FAO food price index jumped by 21% yearly and was 2.2% above the previous peak seen in 2011. Russia and Ukraine are major players in the international market for wheat with a combined share of 30% in 2021. Their combined sunflower oil exports account for 55% of the global market. Russia, along with Belarus, is also a major exporter of fertilizers, leading the world in exporting nitrogen fertilizers, second in potassium, and third in phosphorous fertilizer exports in 2020.  As a result of the conflict, wheat prices jumped by 21% (in line with FAO projections) and fertilizer prices jumped by up to 40%. Russian and Ukrainian share of food and agricultural products are given below:  Russia A Major Supplier Of Wheat For Non-African Countries Too  Now that the Western-led sanctions on Russia have taken effect and supply chains seeing disruptions, the food security of these various African countries, which has typically been fragile in many parts of the continent, can see an adverse impact. The FAO report says that in 2021, 26 countries sourced at least 50% of their wheat requirement from Russia.  Global prices of wheat have increased dramatically: It is not just African countries but even others in the Russian neighborhood like Finland (80%+), and the former Soviet republics of Georgia, Azerbaijan, Armenia, and Kazhakstan that depend on Russia for over 90% of their wheat needs. India’s neighbor Pakistan also imported over 20% of its wheat from Russia.  The FAO has projected that in the ‘short term, the prices of maize, wheat, and other coarse grains (barley, rye, oats, sorghum, and millet) are expected to jump by 19.5 – 21.5%, while oilseeds will see inflation of 17.8% globally, which is projected to lead to undernourishment of 13.1 million people. Similarly, in the medium term, the inflation rate for the commodities will be 13.9 – 19.4%, while oilseeds will see a 13.3% increase in prices, causing additional undernourishment of 11.2 million people worldwide.  Arab Countries Stare At Food Shortages, Others Impose Curbs On Exports  Middle Eastern Arab countries where wheat is a staple of the diet are facing food supply shortages, particularly in Lebanon which is reeling under a severe economic crisis. Countries in the Middle East and North Africa like Egypt and Libya will find their budgets overstretched because of food and energy imports as not only food but crude oil prices continue to rise.  Kristalina Georgieva, the managing director of the IMF, stated to the media earlier in March 2022 that countries in this region will fuel the conflict’s effects “quite severely”. She mentioned Egypt in particular which runs a subsidized bread program for 700 million beneficiaries.  Gilbert F. Houngbo, the president of the UN International Fund for Agricultural Development (IFAD), has warned that the food crisis due to the conflict can have adverse implications for stability in the region itself:  “I am deeply concerned that the violent conflict in Ukraine, already a catastrophe for those directly involved, will also be a tragedy for the world’s poorest people living in rural areas who cannot absorb the price hikes of staple foods and farming inputs that will result from disruptions to global trade”, he was quoted by media on March 17th, adding: “We are already seeing price hikes and this could cause an escalation of hunger and poverty with dire implications for global stability.”