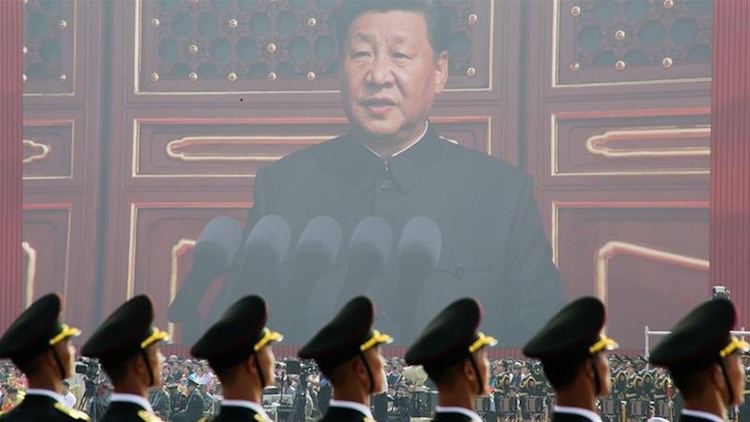 China celebrated 70 years of communist rule with a mighty military parade and nationwide celebrations, flexing its muscular strength to the world as it rises as a global superpower amid trade war with the US and the months-long unrest in Hong Kong.  The only dent in the celebrations was due to protests in Hong Kong as Beijing carefully orchestrated the projection of national unity.
Also Read:
Viral: Surat Residents Do Garba Wearing Helmets

The military parade was followed by the showcasing of the country’s latest technology in the form of hypersonic drone and an intercontinental ballistic missile that can reach the US and a civilian parade, which included everything from founding leader Mao Zedong to the symbolic Chinese bicycles.

China's National Day military parade in numbers:
-59 phalanxes/echelons
-15,000 officers and soldiers
-more than 160 aircraft and 580 pieces of equipment -All equipment exhibited are domestically manufactured
-40% of which have never been revealed in public#China70years pic.twitter.com/oXXR0psFM4

Xi Jinping continued with the old Beijing tradition of watching the parade from a gate on Tiananmen square, the same place where his predecessor Mao Zedong stood to announce the establishment of the People’s Republic of  China on 1 October 1, 1949. Xi who has become perhaps the most powerful leader since Mao himself began the celebrations with a speech that had a message for the world and western powers.  “There is no force that can shake the foundation of this great nation. No force can stop the Chinese people and the Chinese nation forging ahead,” he said “China’s yesterday has been written into history, China’s tomorrow will be even better. Our whole party will endeavour to unite and not forget our mission,” he said. The Chinese authorities made sure everything was delicately curated and planned for biggest national anniversary since president Xi Jinping came to power. Beijing was put on lockdown, with restrictions on everything from kites to homing pigeons to drones.  The only spoiler for Beijing was the ongoing protests in Hong Kong where pro-democracy protestors grabbed the eyeballs with their own rally against what they see as the erosion of their special freedoms.  In Hong Kong, official celebrations were muted. Activist Joshua Wong on Twitter called for international support for the protests. “No celebration, only demonstration”, he said, warning that China was using Hong Kong to “wave its claws at the free world to step up its oppression.”

[10.1 NO CELEBRATION. ONLY DEMOSTRATION.]

1. Hong Kong’s Today; The World’s Tomorrow? The Chinese Communist Party is tearing Hong Kong apart. If we fall, who will be the next?