While the official and media discourse around the recent AUKUS alliance and the dialogue between the ‘Quad’ countries focusing on containing Chinese influence,  it is worth noting that all the countries in the ‘informal’ global grouping have immense trade deficits with China. This means that notwithstanding the media hype and hostile posturing, it is clear that China’s economic and financial heft has immense leverage on these countries, including India. 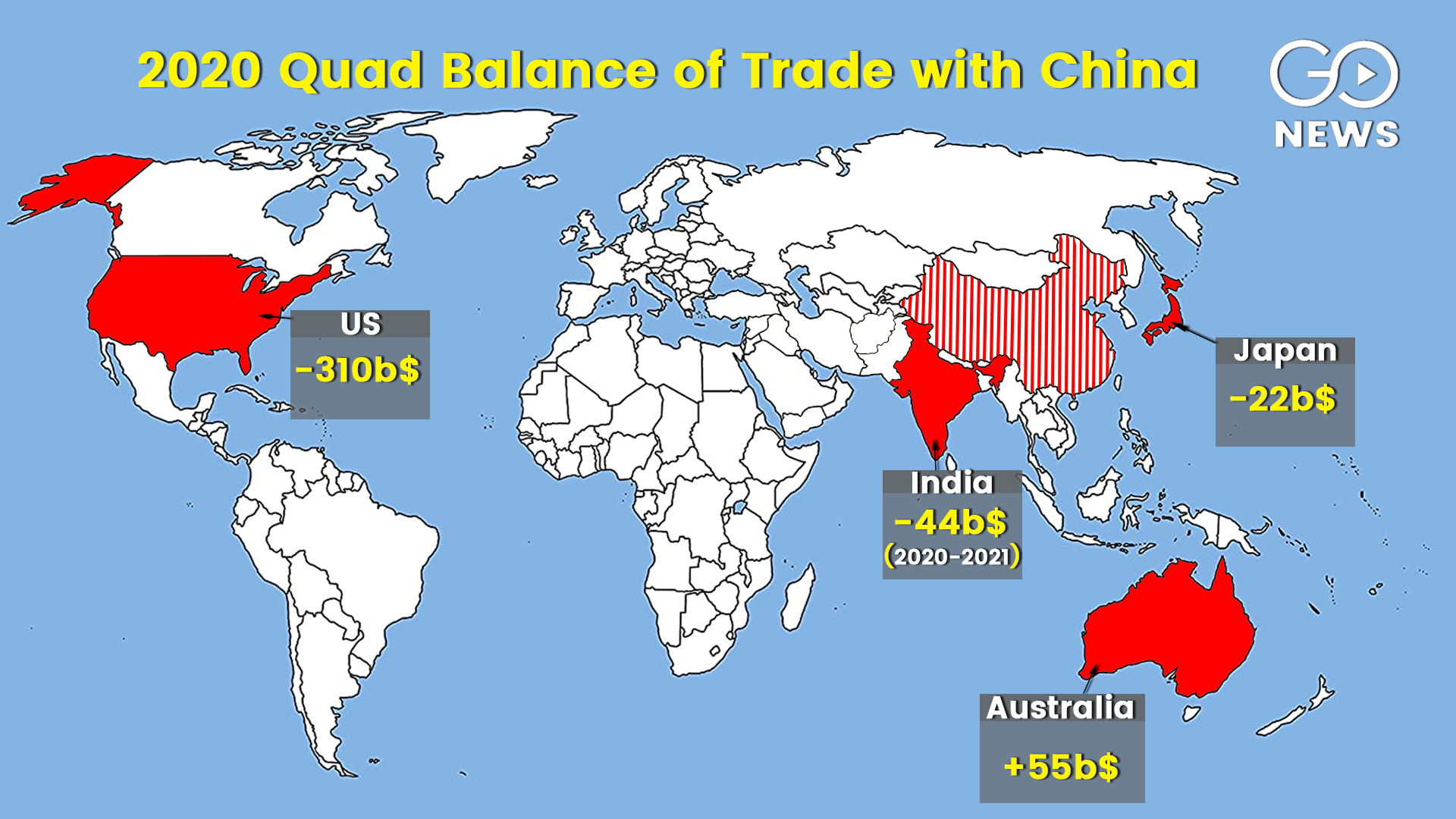 Also Read:
China Bans Crypto Currency In All Forms After Year Of Choking The Industry

Trade deficit is the situation wherein the imports from a country exceed the exports to that particular country. In other words, it means that the country in trade deficit is more dependent on the other trading ‘partner’. According to data from 2020, the United States has a $310 billion trade deficit with China. Japan has a $22 billion trade deficit, and India’s trade deficit with China stood at $44 billion in the year 2020-21. Australia is the only nation in the ‘Quad’ with a trade surplus with China of $55 billion, and yet, since 30% of its trade is with China, it too is within the financial orbit of the latter. China’s total export surplus globally is $535 billion, and the trade deficit of the Quad block as a whole with China adds up to $321 billion. That means, 60% of the trade deficit with China originates from these four countries itself. China’s $535 global trade surplus was a 27% jump from 2019 and the highest since 2015. The year-on-year growth of exports in December 2020 was 18.1%. China’s Trade Surplus, Economy On Upswing During Pandemic China’s trade surplus was boosted further by the advent of the coronavirus pandemic, and the resultant global demand for work from home tech and health equipment. Despite the slowdown caused in its economy like that of the whole world’s, it was the only country whose economy grew in 2020: growth was 6.5% in the last quarter of 2020. The recovery and growth were further boosted by a rise in exports in December 2020 catalysed by a rise in demand for Chinese goods. The Wall Street Journal sourced data from China’s General Administration of Customs to report that China’s exports in August 2021 posted a year-on-year growth of 25.6%, higher than 17% that was expected by economists in a survey conducted by the newspaper itself. In July, this increase was 19.3% YOY.   The United States has also been quick to realise that China is a legitimate contender for the top spot in the world economically, and tried to push back with the ‘Trade War’ initiated by previous President Donald Trump in 2018. This move was sold as encouraging consumers to buy American for Trump’s domestic political purposes, but in China it was seen as an attempt by the US to block China’s emergence as a global power. As part of the trade war, both countries exchanged tariffs on each others’ imports. BBC showed how tariffs began at $34 billion in July 2018 on both sides, initiated by the Trump administration. But then, they escalated to $200 billion at 10% in September 2018 and then $200 billion at 25% in May 2019 on the American side. China increased its tariffs from 10% in September 2018 to 25% in May 2019. As geopolitical and strategic tensions simmer up, the heads of governments of both countries have postured assertively against one another. The Indo-Pacific region shows all signs of becoming the next theatre of contestation (not necessarily armed) even as China increases its global stakes by investing in international projects like the Belt and Road Initiative (BRI) and the Asian Development Bank (ADB), among others. China has a strong economic heft that cannot be dismissed, regardless of how polarly opposite its ideology or aims are to the West-centred world.