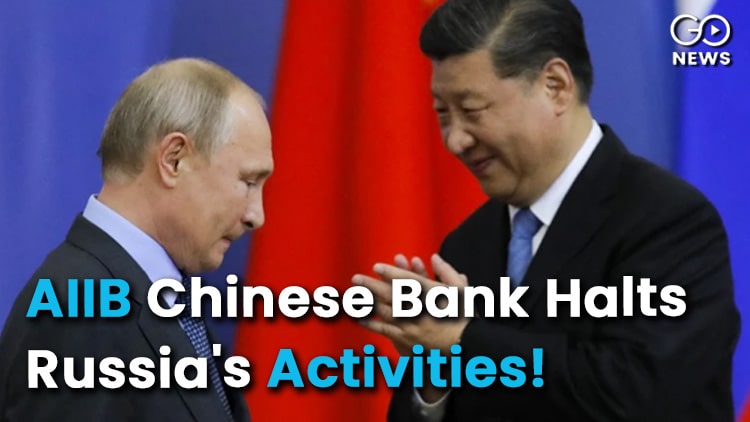 Many governments, organisations, and institutions throughout the world have closed or partially closed trade and business with Russia in the aftermath of the Russian invasion on Ukraine. The Chinese-owned AIIB - Asian Infrastructure Investment Bank - is also embroiled in this scenario, having just chosen to suspend all of its operations in Russia and its partner Belarus.
Also Read:
Russia Ukraine Conflict Day 8: Important Updates To Know

On behalf of AIIB, it was said that these moves were taken due to the current economic circumstances. Beijing's support for Moscow has reached its limitations, as evidenced by this move. Chinese authorities have previously stated that Russia should follow the route of negotiation with Ukraine and end the "operation," but China has never used the term "invasion" to describe Russia's actions in Ukraine. China is likewise refraining from voting against Russia at the UN Security Council.
China has also slammed "any illegal unilateral sanctions" imposed by Western and European countries against Russia.  "Management has decided to halt all activities connected to Russia and Belarus in the best interest of the bank," the Beijing-based firm said in a statement on Thursday. The Multilateral Development Bank, which has 105 members around the world, did not provide an explanation for why it was suspending operations, but executives conveyed their sympathy to all those affected by the issue.  It's worth mentioning that the Chinese-owned financial bank's move comes only days after many Chinese government-owned financial institutions, including the Bank of China, opted to halt funding deals with Russian oil companies.  According to experts, AIIB's decision is unquestionably symbolic. In Russia, there are no large AIIB projects underway that would necessitate a decision to cease "activity." Russia is home to the AIIB's only two $800 million initiatives. Belarus has no investment from the Chinese-owned bank. Relations between China and Russia have improved dramatically in recent years. Both have been seen protesting the US and its allies' alleged intervention.  Last month, Chinese President Xi Jinping and Russian President Vladimir Putin said that their friendship had "no bounds" and that there were no "prohibited" sectors of collaboration between their countries.  Last month, China's customs office removed limits on wheat imports to Russia, a $7.9 billion-a-year sector. Of course, in the face of Western and European sanctions, this may assist shape the Russian economy. China and Russia have also reached an agreement on energy trade, which includes the import of Russian gas through a new pipeline to China over the next 30 years. But let's also mention that commerce between Russia and China reached $ 146.9 billion in 2021, accounting for a tenth of total trade between the US and the EU.  One of the main reasons China does not publicly back Russia is because of this.  China, for example, is already viewed as a critic of European and Western sanctions, and at a time when Russia is facing sanctions and measures to isolate it, China does not want to be on the receiving end of them. Any communication of this nature should be addressed to the international community.