COVID Kills Trump’s Chances In US Presidential Race, Biden On Course For Victory

by GoNews Desk 6 months ago Views 4329
https://www.gonewsindia.com/latest-news/international/covid-kills-trumps-chances-in-us-presidential-race-biden-on-course-for-victory-19565
With the US presidential election just three weeks away, a survey by the noted British newspaper Financial Times showed that President Donald Trump is not returning to power as his poll ratings are going down and Democratic candidate Joe Biden may become the 46th President of the US in a blowout victory. According to experts, Biden's popularity widened since the first Presidential Debate and Trump’s hospitalisation for Coronavirus. But even small changes in voter turnout could change the entire outcome of the election.
Also Read:
MP Road Rage: Auto Driver Brutally Beaten Up In Jabalpur, Accused On The Run

Trump's main cause of concern is that he is trailing in such states which are traditionally Republican-dominated. In simple language, the Republican supporters themselves do not want Trump to become the president. Some Republicans are even blaming him for not being responsible. According to the Financial Times, Joe Biden's popularity in this presidential election is 51.7% while Trump's popularity is steadily declining. In contrast, 41.9% of Americans want to elect Trump president again. Almost all the opinion polls are predicting Biden's big win. Election pundits believe that just as Hillary Clinton suffered an unexpected defeat in the last presidential election in 2016, something similar may also be seen this time. According to a report, the vote margin between the two candidates is 13 to 86. This means that if elections were held under the same circumstances, Biden has an 86 in 100 chance of winning the election while Trump has a 13 in 100 chance of winning. Earlier in August, the gap between the two candidates was 29-71. 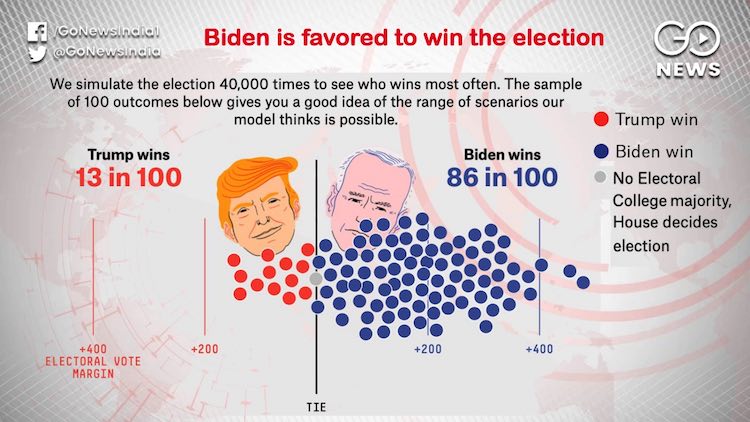 However, in the 2016 presidential election, Trump won over Democrat Hillary Clinton despite having a chance of 29–71. Now, whether Trump will be able to regain his lost US states before polling or the nation will get a new President remains to be seen.