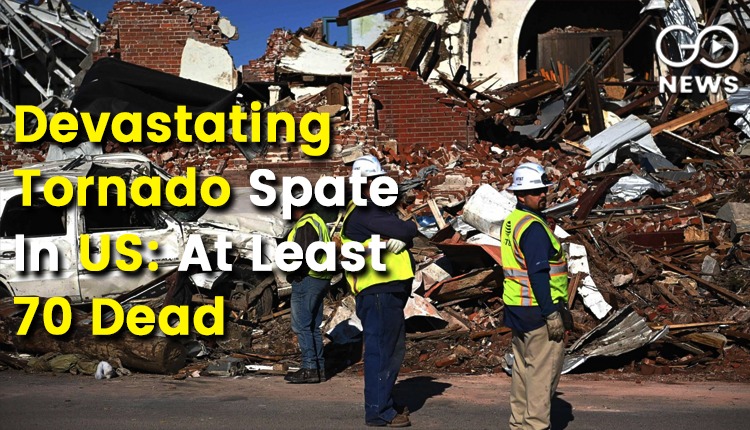 The midwestern region consisting of five states of the United States were hit by a devastating spate of consecutive tornadoes that have left behind death tolls in the hundreds, and destroyed homes and businesses. The death toll is at least 70 and many areas have been let without electricity. As many as 30 tornadoes were reported across 6 states on Friday and Saturday.
Also Read:
Inequality In India: 10% Control 57% Of National Income

Christopher Bowlin, 24, Outside His Destroyed Home In Mayfield, Kentucky  The tornado primarily affected the state of Kentucky although it also caused damage and deaths in neighbouring Arkansas, Illinois, Tennessee and Missouri, including at an Amazon warehouse in Illinois where 45 have survived while 5 have died and at a factory in Mayfield, Kentucky where the dead could number in the dozens as rescue and relief operations are still ongoing.

We got this shot from a lake house on Lake Barkley… we just down from Boyd’s Landing. The tornado was tracking across the lakes at this time.

Mayfield, Kentucky Mayor Kathy O'Nan said that the city "looked like matchsticks" when she stepped outside the City Hall afer the tornado had struck. Governor of Kentucky Andy Beshear has said regarding the Mayfield factory incident: “We believe our death toll from this event will exceed 50 Kentuckians and probably end up closer to 70 or 100 lost lives.” Kentucky has seen upwards of 100 casualties as a result for the tornados.

This morning, I was briefed on the devastating tornadoes across the central U.S. To lose a loved one in a storm like this is an unimaginable tragedy. We’re working with Governors to ensure they have what they need as the search for survivors and damage assessments continue.

President Joe Biden has termed the death and destruction from the natural disaster as “an unimaginable tragedy” and also termed it as “likely to be one of the largest tornado outbreaks in our history”. He has stated his support for emergency funding for Kentucky and all other states that require it. The President expressed a message of unity and reassurance to the people of the country, saying: “I want folks in all these states to know that we’re going to get through this, and we’re going to get through this together. It’s one of those times when we aren’t Democrats or Republicans. That sounds like hyperbole, but it’s real. We stand together as the United States of America.” Several Injured Apart From Death Count Many people have faced mild and serious injuries as a result of the tornados, mostlyas a result of beign inide buildings that collapsed in the tornado surges. Damage assesments and search for survivors are ongoing. A nursing home was struck by a tornado in Arkansas, leaving 1 dead and 20 trapped inside. Tehe building was cleared in 90 minutes but Marvin Day, Craighead country judge, said that efforts were still necessary to locate other possible victims. In Missourie, wind speeds of up to 70 mph were recorded in St. Louis and St. Charles counites of the state, leaving at least three people in hospital in the latter county. Similarly, homes were destroyed by twisters in New Melle and Defiance towns of the state, which left 2 injured and 1 dead according to The National Weather Service office in St. Louis. The average warning time for a tornado is just 13 minutes in the United States, according to CNN. The fitrst warning for Mayfield, Kentucky wasposted at 9.05 PM and within 21 minutes, i.e., at 9.26 PM, it had been upgraded to “tornado emergency” which is understood as a life-threatening situation. CNN says that the tornado hit Mayfield just a minute later at 9.27 PM.   Caution On Stating Climate Change Link To Tornado Strikes The President has asked the country’s EPA (Environmental Protection Agency) to look into the links of the tornado to climate change, but he and other experts have cautioned that the links cannot be readily established. But, he has emphasized that finalizing the casualties count and conducting rescue will be the first priority.

Last night was one of the most shocking weather events in my 40 years as a meteorologist--a violent tornado (in December!) drawing comparisons to the deadliest and longest-tracking tornado in U.S. history, the 1925 Tri-State Tornado. Hoping this list doesn’t need updating: pic.twitter.com/sg0l4hfEdE

He has only said thus far that the “intensity” of weather phenomena is recent times is linked to the overall warming of the globe. He stated: “The specific impact on these specific storms, I can’t say at this point. I’m going to ask the EPA to take a look. But we all know that everything is more intense when the climate is warming. Everything.” Some expert have said that the components that go into creating a tornado are increasing in intensity and frequency in context of a warmer world. Other voices, such as this New York Post article, say that there is no scientific evidence to link tornado frequency and damage with climate change.

Given the rarity of yesterday's tornado outbreak and its context to climate change, we can indeed observe increases in extreme STP environments during winter months according to ERA5 reanalysis (our study in BAMS: https://t.co/MTDeQFNKSR). #tornado #wxtwitter #climatechange pic.twitter.com/LkEFX4Chc3

This is the first time that a tornado spate has killed more than 80 people outside the March-June tornado season, as pointed out in this Yale Climate Connections article. A shift in tornado timing is the main trend being observed so far.