Expo Showcases The Business Of Buddhism 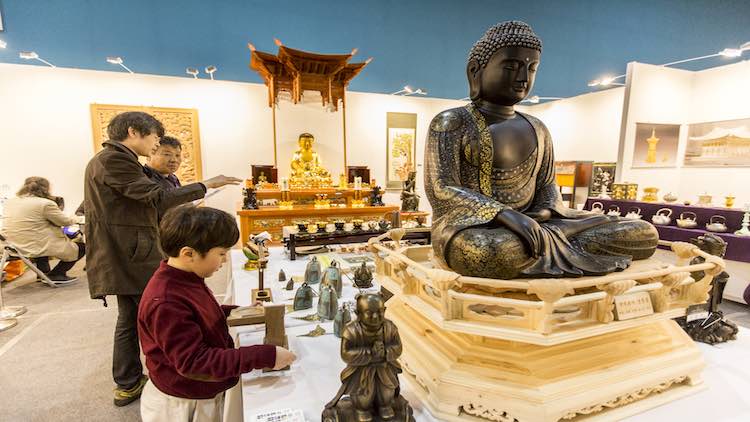 Tens of thousands of people from around the world are heading to South Korea this month for one of Asia’s most diverse expos, which will showcase a global industry born out of the traditions, beliefs and spiritual practices of Buddhism. The 2019 Seoul International Buddhism Expo (BEXPO) will be held at the Seoul Trade Exhibition & Convention (SETEC) from November 14th to 17th. Also Read: I’m Coming For The One Championship World Title - Ritu Phogat

Organisers said they expect over 70,000 local and foreign visitors from across Asia, Europe and North America. The event will feature conferences and speakers led by internationally renowned Buddhism experts, 417 booths and 327 exhibitors. Participants and visitors will come from Canada, USA, China, Taiwan, Thailand, Malaysia, India, Nepal Sri Lanka and Myanmar, among other nations. “We expect our Expo to be a chance for the Buddhist industry to grow and communicate with the public, allowing more people to feel the essence of traditional Buddhist industry and culture,” said Wonhaeng, Chairman of 2019 Seoul International Buddhism Expo and the Executive Chief of Korean Buddhist Jogye Order. The Jogye Order, which is the key sponsor and organiser of this seventh annual event, represents the largest segment of South Korea’s Buddhist population, administering about 1,900 active temples with more than 13,000 monks and nuns who lead seven million followers nationwide. “The spiritual-cultural heritage and method of practicing Korean Buddhism, like meditation, is one of the best mental and cultural gems that Korea can present to the world," said Hong Seung-do, Secretary-General of the Expo. He said the Expo provides a fertile ground for the exchange and development of the global Buddhist industry. Ajung Kim, a Vancouver-based filmmaker, said the Expo showcases the diversity of the Buddhism industry, which is a significant cultural component in South Korea that dates back to some 1,700 years ago. “We have always been striving to share these cultural practices and messages with global audiences,” said Kim, who is in charge of Global Business Development for Mind Design Inc. which has been working with the Seoul International Buddhism Expo committee, since its inception. “In North America, there is a growing number of people who are adopting the Buddhist meditation and mindful lifestyle, incorporating them in science, medical discoveries and technological innovations,” she said. Mindfulness practice and training, which has its origins in Buddhist meditation teachings, is now part of a global wellness industry worth trillions of dollars. This include over 1,300 downloadable apps, books and online courses. “We hope to bring components of the Seoul International Buddhism Expo to Canada soon,” added Kim. Other than traditional Buddhism craft products, tea, arts, décor and sculpture, the Expo will also feature  Temple Food, which will be staged this year by Hyang Jeok Won – Bulguksa (temple), Gyeongju, Korea, Table in Nature – Tongdosa (temple), Yangsan, Korea and Mananim Recipe of Seoul. Temple food refers to the cuisine of Buddhist monks and nuns and is considered as one of the ways to exercise the teachings of Buddha. According to the Cultural Corps of Korean Buddhism, Temple Food includes the growing of ingredients to cooking and eating, as Buddhists hold reverence for all living things and embrace a harmony with nature.  They do not use meat, fish or any artificial flavor enhancers. Five pungent herbs called oshinchae - green onion, garlic, leek, chive, and wild chive - are not allowed in the creation of Temple Food. Practitioners use only seasonal vegetables and soybean paste or soy sauce made by themselves at temples. Around 130 temples across Korea run Templestay programs and some of them allow you to make your own Temple food dishes.  For more information, please visit the website (bexpo.kr).  By Mata Press Service
TAGS South Korea Buddhist industry Seoul Trade Exhibition & Convention global industry 2019 Seoul International Buddhism Expo Buddhism