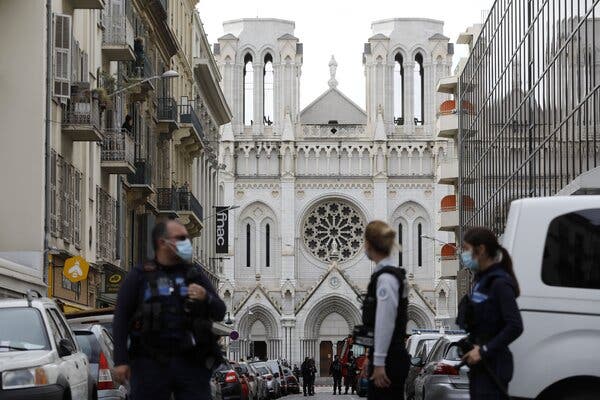 French Police have arrested the attacker who beheaded a woman and killed two others in a knife attack on a church in France’s Nice city on Thursday. The attacker injured by the police bullet is currently in hospital. He hails from Tunisia and came to France only last month.

An aged woman was decapitated by the knife-wielding assailant while a man and a woman were also brutally killed. French President Emmanuel Macron has described this as an ‘Islamic terrorist attack’. Macron said, “Very clearly France is under attack,” the basic values ​​of freedom in France are under attack and we “will not give into terrorism”.

In wake of the attack, a red alert has been declared in the country. The internal security system has been elevated to the highest level. At the same time, France has claimed that the man who was killed in Avignon was a supporter of the anti-immigrant group and recently beat up a local businessman of North African origin. The country’s anti-terror prosecutors have started an investigation into the murder.

Nice Mayor Christian Estrosi called the attack ‘Islamo-fascism’ and said that the attacker was repeatedly shouting ‘Allahu Akbar’. Apart from this, one attack each took place in France and Saudi Arabia on Thursday. A man was shot dead in Mönfève near the southern French city of Avinue. He was threatening the police with a handgun. At the same time, a security guard was attacked outside the French Consulate in Jeddah, Saudi Arabia. The suspected attacker has been detained while the security personnel has been admitted to a hospital.

French President Emmanuel Macron had recently defended the magazine Charlie Hebdo, which printed a satirical caricature of Prophet Muhammad, saying that its publication would not be stopped. After this, demonstrations against France started in many Muslim countries. Calling Macron's statements as anti-Islam, the Muslim world is accusing the French president of spreading ‘Islamophobia’. However, apart from all European countries, the US and India have lent their support to Macron’s tough stance against Islamic fundamentalism.