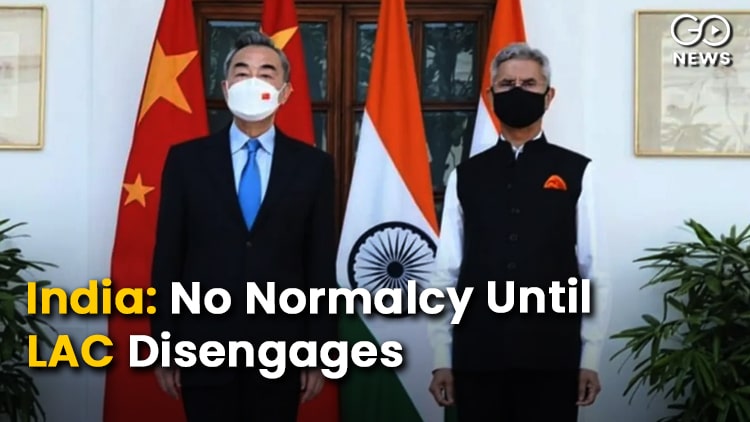 Chinese Foreign Minister was on an official visit to India on Friday after landing in New Delhi on Thursday.  In the two sides' comments after the meeting, India underlined the impact of the border dispute and pursuing disengagement on bilateral ties, saying that they are 'not normal' at present. China, on the other hand, did not mention the LAC or Ladakh in its official communique.  India stressed that normalising relations with China is contingent on restoring peace along their borders, while China urged the two nations should work together to promote peace and stability in the region.
Also Read:
IPL 2022: Can The Most Popular Team RCB Win Their First IPL Title?

‘Work In Progress, But Slow’: India On China Border Dispute, Troop Build-Up In 2020, 20 India soldiers were killed in a confrontation with the Chinese military in the Galwan valley region of Ladakh, and relations have been at a low point since. 15 Corps Commander-level talks have been held to pursue disengagement and de-escalation at critical points since then. "The frictions and difficulties that come from China's deployment from April 2020 cannot be reconciled with a normal relationship between two neighbours," Indian Foreign Minister Subrahmanyam Jaishankar told reporters after three hours of talks with his Chinese counterpart on Friday. He further underscored “the need to speed the process of disengaging the tens of thousands of troops stationed along their Himalayan frontiers” and flagged the slow pace of the progress: “Surely, the presence of a significant number of troops in breach of agreements is an oddity”, and “our current scenario is a work in progress, moving at a slower rate than we would like.” Visiting Neighbours: Chinese FM In India In First Since 2019 After Afghanistan, Pakistan Wang's travel to India is the first high-profile visit by a senior Chinese official to New Delhi since a two-year border stalemate between the nuclear-armed neighbours resulted in a significant deterioration in relations. It is being interpreted as an attempt to mend fences and normalize ties. Wang Yi landed in Delhi in an officially unannounced visit, signifying strained ties compounded by his reference to Jammu and Kashmir at the OIC foreign ministers’ summit in Islamabad, Pakistan, as the chief guest. He was in Kabul the day before in a first high-profile visit by a major power to the as yet unrecognized Taliban regime in Afghanistan since August 2021. Responding to Wang's statements about the disputed Kashmir region earlier this week, India said China's policies toward New Delhi should not be affected by those of other countries. "China shares the same hope," he said at a gathering of the Organization of Islamic Countries in Pakistan, which pushes for ‘self-determination’ for Kashmir. After his India visit, Wang Yi flew to Nepal and arrived in Kathmandu on Friday, March 25th. Kathmandu Post has reported that there will be at elast 10 agreements of technical and economic assistance to Nepal signed. The talks on the country joining China’s Belt-and-Road Initiative (BRI) will also progress during the meet. China Talks ‘Win-Win’ Cooperation, Rejects ‘Unipolar Asia’ The Chinese Foreign Ministry stated in a statement published following Wang's visit to New Delhi that the two countries should "appropriately position" their differences on the border issue in bilateral ties. China does not seek a "unipolar Asia," according to the statement, and recognises India's longstanding position in the area. Wang stressed the importance of China and India sticking to their respective growth paths during his visit on Friday. He also advocated a “three-point strategy”: long-term thinking about bilateral ties, win-win thinking about each other's growth, and constructive participation in the multilateral process. This not only demonstrates China's wide-ranging thinking as a big power, but it also serves as a friendly reminder to India. Chinese State Media Bats For Warmer Ties, Sees U.S. Hand In ‘Discord’ The state-controlled Global Times published an op-ed after the meet and said that the Ukraine conflict and Washington’s “domineering” behaviour towards India, going aginst its policy of ‘independent diplomacy’, is an occasion to “warm up ties” between India and China. It said that a single ‘episode’ on the border should not preclude a long-term “vision” going “beyond specific frictions”   The column says that Western-driven “pressure” on India to adopt a hawkish policy stance towards China which it sees as an “opportunity to sow discord” for Washington and secure its own regional interest of countering China. The op-ed says that “when it comes to major goals involving common interests, China and India should keep standing together”. It also said that China has expressed its “goodwill” to India and the latter should reciprocate and “meet China halfway”.