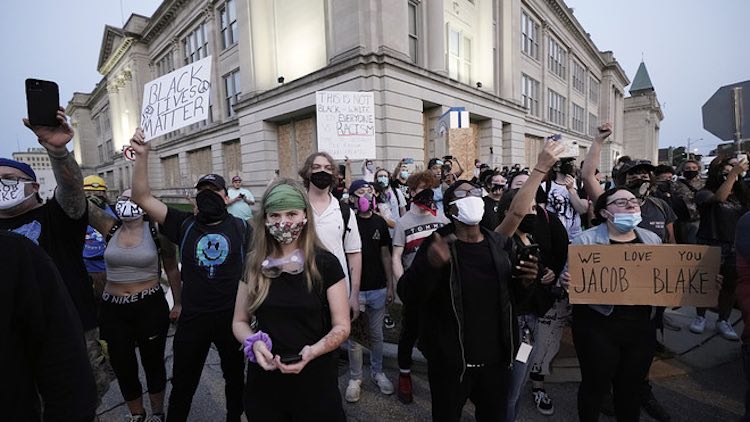 Violent protests continued for the third day running in the US state of Wisconsin as State Governor Tony Evers declared an emergency following the shooting of a Black man by police. National Security Guards have been deployed to bring the law and order back on track.
Also Read:
NEET, JEE Exams Will Put Students' Lives At Risk, Opposition Seeks Postponement

On Sunday evening, two white policemen fired on Jacob Black, a 29-year-old black citizen, in the city of Kenosha, Wisconsin. Jacob Blake was hit by seven shots in front of his three children who were sitting inside the car. Doctors have removed bullets from his back after performing surgery. However, it is being said that Jacob Blake's spine has deteriorated and now it is difficult for him to ever walk again. After the incident, people poured out to the streets in Kenosha and started demanding accused policemen be arrested. However, the demonstration has gone violent as protesters opened fire, and vandalised buildings. Security forces used pepper sprays, a high-pitched alarm noise to clear the crowd, but on the third day, the protesters are still on the streets. The National Security Guard troops in the affected areas have been increased from 100 to 250. Democratic leader and Governor Tony Evers condemned the incident immediately after the firing and criticised the policemen for using excessive power. Tony Evers has called a special session with all Wisconsin legislators on August 31 where police reforms will be discussed. In May this year, George Floyd, a 43-year-old black citizen, was murdered by white policemen in Minnesota which triggered violent protests across the country. After almost four months, a fresh round of demonstrations has started. Governor Tony Evers has admitted that after the death of George Floyd there has been no progress on the laws announced for accountability and transparency of the police.