Myanmar: Landslide At Jade Mine Kills 162 Workers, Many Missing 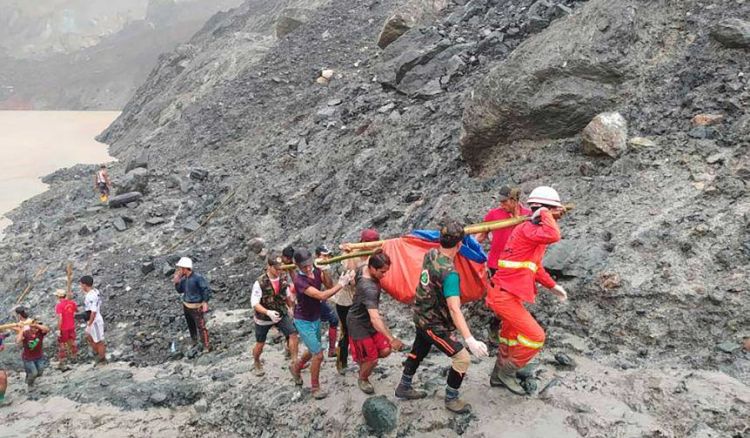 A massive landslide in a Myanmar Jade mine has killed at least 162 workers. The Myanmar government has said that 162 bodies have been recovered so far and many people are still feared buried. This mine with a huge stock of green stones used for jewellery is in the Kachin province of Myanmar.

A landslide at a jade mine in northern Myanmar has killed at least 162 people, with more feared dead in the worst in a series of deadly accidents at such sites in recent years.#myanmarlandslidehttps://t.co/rxu5sfpIXB pic.twitter.com/KV3cM4RFGx

The accident occurred around 8 am on Thursday morning when the labourers were working at a height of 250 feet. Due to the continuous rain, water accumulated near the mine, and it suddenly collapsed. Many workers died due to drowning in the mine. According to Kachin police, due to heavy rains, people were warned not to work, but even then people went to work and fell victim to the accident.

Today’s #Myanmar landslide and associated waves from a different angle. It looks the incident involved several landslides in the #Jade mine. The landslide-generated waves are massive here! hope those people survived! #Landslide #Hydraulics pic.twitter.com/lBrnSE6fKW

According to the Kachin government, more than 250 workers were working in the mine at the time of the accident and many workers are still missing. All agencies are engaged in relief and rescue operations, but due to rain, they are facing increased difficulties.

Devastating news from #Myanmar : More than 100 people die in a landslide. pic.twitter.com/QIC7YDlomN

Jadeite metal is mined extensively in jade mines of Myanmar. The world's best jadeite is found here in the northern part and around 70% jadeite in the world is supplied from Myanmar.

Last year in August, 59 people lost their lives due to landslide in southeastern Myanmar. This tragedy also happened due to heavy rain. At that time,  80,000 were rendered homeless due to floods and rain.