A Delta Airlines flight which had to make an emergency return to Los Angeles airport, dumped thousands of gallons of aviation fuel over an area housing 6 schools. 60 people, mainly students, were treated for fuel contamination. The plane was bound for Shanghai in China but it returned to the airport due to an engine issue. While fuel dumps are done mainly over water bodies, the Delta plane wasn’t even able to reach relatively close seafronts, indicating that the emergency shortly after take-off would have been very serious. Also Read: Broadband Internet Partially Restored In J&K, Ban On Social Media Remains 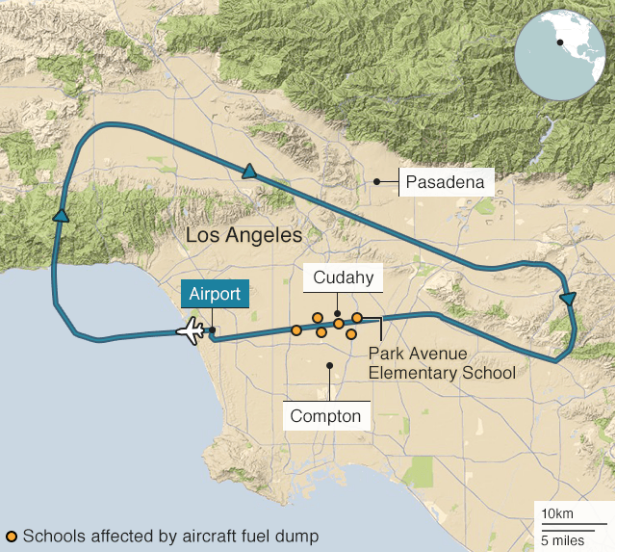 Planes are required by protocol to dump fuel so as to make the aircraft as light as possible while conducting an emergency landing and avert any deadly blaze from the highly inflammable fuel. According to Flightradar24, Delta Flight 89 — a Boeing 777 — climbed to 7,775 feet before it started to descend after less than 3 minutes and was at about 2,300 feet when it passed over the school at 11:53 a.m. The flight is typically a 13-hour nonstop. This one lasted about 25 minutes.

Flight #DL89 climbed to 7.775 feet before it started it started to descend after less than 3 minutes. pic.twitter.com/k6QhvZvuPv

Due to the amount of fuel long-haul flights carry, they usually take off weighing more than their maximum allowed landing weight and then this weight normally reduces as per fuel consumption. Many of the students doused in the fuel reported itchiness and heavy breathing. They were washed down with soap and disinfectant.
TAGS schools Students Boeing Airplanes Delta Flight 89 China Shanghai Aviation Aviation fuel fuel contamination fuel dumping Los Angeles airport Los Angeles Delta Airlines