President Biden also tore down Trump's decisions on immigration. These include a ban on construction of a wall along the Mexico border, revoking travel ban imposed on 13 Muslim-majority countries. Regarding immigration, Biden signed a memorandum that provides protection to migrants entering the US as 'deported children'. 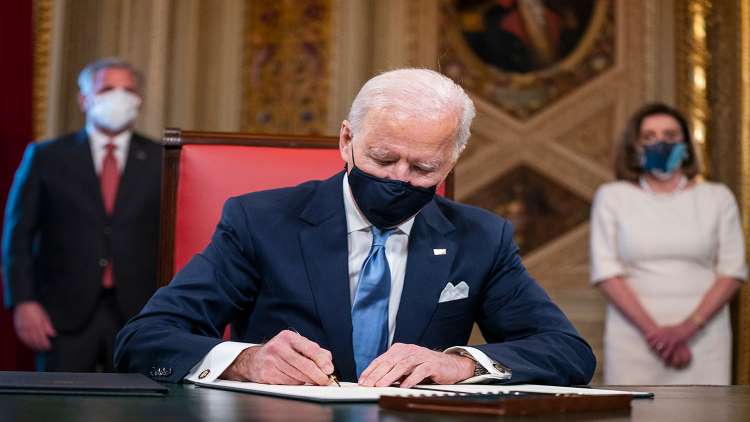 Acting hours after he took oath as the US President, Joe Biden unleashed a full-scale assault on his predecessor's Donald Trump's legacy. On the very first day in office, Biden issued 17 executive orders, including the US' return to the Paris Agreement on the climate crisis and the World Health Organisation, and ended the Muslim travel ban. Biden has also stopped the construction of Trump's most cherished wall along the US-Mexico border. A look at Biden's executive orders:
Also Read:
India Tops World In Internet Shutdowns In 2020, Suffers $2.8 Billion Loss

Mask Mandatory At a glance, Biden's executive orders make masks mandatory to deal with the Coronavirus pandemic for the next 100 days. The Department of Health and Human Services and the Center for Disease Control and Prevention have been suggested to work closely with state and local municipalities to implement this. During this time, it has also been said to vaccinate 100 million people. Reinstating Ties With World Health Organisation President Biden has decided to rejoin the World Health Organization. A few days after the pandemic began, former President Trump pulled the US out of the World Health Organization. Dr Anthony Fauci, director of the National Institute of Allergy and Infectious Disease, will lead the US delegation to the World Health Organization and will meet with executive board members on Thursday to discuss the strategy ahead. A separate team has been formed to deal with the pandemic. The period for re-payment of education loans of students has been extended till 31 September. Biden has ordered the Centers for Disease Control and Prevention to extend the moratorium on deportations till 31 March. Climate and Environment Biden made a comeback to the Paris Climate Agreement as soon as he assumed the chair. The former president also separated the US from the climate accord. Biden was expected to return to the deal in his first order. Just 30 days from today, the US will officially be part of the climate agreement again. In addition, Biden also passed new policies, overturning Trump's environmental agenda. Immigration and Equality President Biden also tore down Trump's decisions on immigration. These include a ban on construction of a wall along the Mexico border, revoking travel ban imposed on 13 Muslim-majority countries. Regarding immigration, Biden signed a memorandum that provides protection to migrants entering the US as 'deported children'. This decision of Biden will provide relief to those who came to America during their childhood and contributed to the development of the nation. Biden also said that a law will also be made for this and a bill will be sent to the US Parliament. He has also signed an executive order to end racial discrimination of any kind in federal agencies and other institutions.