The crash of the Lahore-Karachi PIA Flight PK8303 into a residential area shortly before landing with 99 people on board comes within a week of Pakistan partially resuming domestic flights. While there is no official confirmation of the dead at the time of writing, there are reports of survivors. Eight crew members were among those on board. The death toll is likely to be high.
Also Read:
MIT Further Downgrades Aarogya Setu App

The Airbus A320 reportedly hit a mobile tower before crashing into Karachi’s Model Colony close to the Jinnah International Airport.

The pilot sent out a “Mayday, Mayday, Mayday” distress moments before the crash, according to an audio clip posted by the website LiveATC.net. A transmission of the pilot’s final exchange with the control tower showed he could not land the first time around and was circling to make another attempt, 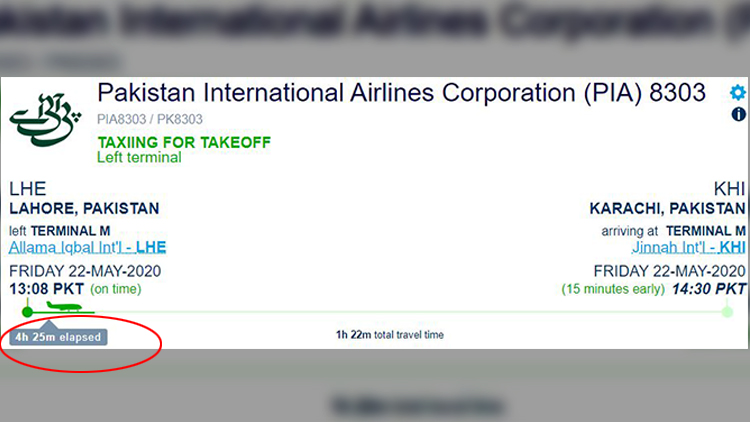 “We are proceeding direct, sir — we have lost engine”, LiveATC.net posted as him saying. The crash comes after Pakistan resumed domestic flights on May 16 amid the coronavirus lockdown. . Five major airports, namely Islamabad, Karachi, Lahore, Peshawar and Quetta were made operational for the resumption. The first flight was from Karachi to Lahore on the same route which the ill-fated PIA plane took on Friday. Flight tracking activity log from Flightaware.com shows that on Wednesday, May 20, the same A320 PIA flight from Lahore to Karachi lasted only 34 minutes, indicating a turnaround and aborted journey.

PIA currently operates 11 A320s at an average age of over 13 years. The last crash involving a PIA plane was in December 2016, when an ATR 42-500 turboprop caught fire while on the way to Islamabad from Chitral, killing all 47 on board. Though it’s too early to say, there could be concerns that with thousands of aircraft grounded throughout the world, ensuring air worthiness by respective airlines and countries will be a key safety factor. The world has never seen a virtually total lockdown of commercial air travel for so long during the COVID-19 pandemic. A parked aircraft has to be maintained daily, particularly in dry and sandy areas. Engineers have to protect engines, hydraulics and flight control systems. Grounded aircraft also need protection from corrosion to parts, damage to interiors and to equipment from insects. It takes 60 hours to ‘mothball’ an Airbus A320 to make it serviceable.