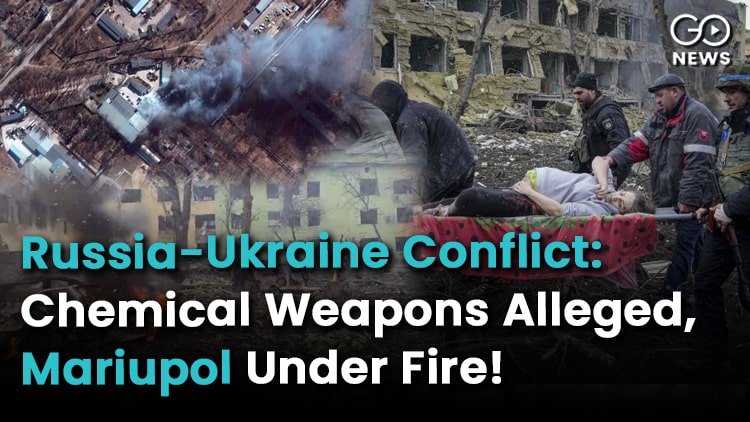 The military conflict between Russia and Ukriane has enterd its 16th day today after yesterday’s talks in Turkey between foreign ministers of both countries failed to resolve the conflict. Important points to know today: Russia Continues To Strike Mariupol, Both Sides Spar On Civilian Evacuations
Also Read:
UP Results: The Three Factors That Led BJP To Lucknow — Again

As the Russian military strikes in Ukraine continue, the mayor of Mariupol, Vadym Boychenko, has said that over 400,000 people of the city are experiencing Russian shelling every 30 minutes. Yeterday, Russia had conducted strikes on a hospital in Mariupol which was condemned by the United Nations General Secretary, but countered by Russia which claimed that Ukrainian nationalists associated with the Azov Battalion, a neo-Nazi outfit, were hiding there. During talks in Antalya, Turkey yesterday between the foreign ministers of Russia and Ukraine, Russia’s Sergey Lavrov reportedly told his Ukrainian counterpart that “This maternity hospital has long been occupied by the Azov Battalion and other radicals. They drove out the women in labor, nurses and general staff. It was the base of the ultra-radical Azov Battalion” At least 17 people were reportedly injured in strikes on Mariupol yesterday on March 10th. Journalist Olga Tokariuk posted this tweet today on the strikes:

I received an update from a relative of Marianna - a pregnant girl from Mariupol's bombed hospital. They were able to reach her on the phone briefly. Last night at 10pm, Marianna gave birth to a baby girl! They are ok, but it's very cold in Mariupol and the bombing doesn't stop pic.twitter.com/PSLxI6I0zZ

Ukranian President Volodymyr Zelenskyy alleged that the Russian military was bombarding the city and not allowing civilians to escape, terming it “outright terror”. The city’s mayor Mr. Boychenko also stated that over half of Kyiv’s population has fled. The number of Ukrainian refugees has reached 2.3 million according to estimates. On the other hand, it is also claimed that Russia is attempting to carry out civilian evacuations while Ukraine’s nationalist elements are not allowing civilians to leave.

Possible some media don't want to check whether Azov is blocking evacuation of Ukrainians from cities, particularly Mariupol. The truth may not fit within preferred narrative of war. Then again - if media cares about Ukrainians, they should seek out why they're being trapped.

Reuters has reported that Russia has also evacuated 2.2 lakh people from the pro-Russian region of Donbass and other parts of Ukraine.

About 222,000 people have been evacuated to Russia from Ukraine and its two Russian-backed rebel regions, the TASS news agency said pic.twitter.com/ixNuWuaJdf

Russia has stated that it will continue civilian evacuations from Ukraine even without the approval of Kyiv. Russian Colonel General Mikhail Mizintsev, the chief of the National Defense Management Centre, told media on Thursday that it will “guarantee complete security” to those choosing to leave Kiev, Chernigov, Sumy, Kharkov, and Mariupol through exit points controlled by Russia.  Russia also claims to have captured Volnovakha, a town between the separatist-controlled Donetsk and Mariupol, where a ceasefire was declared on March 7th. The news agency RIA quoted the Russian Defence Ministry which confirmed that pro-Russian separatists had captured the town.

Russia claims its forces have captured Volnovakha, a town on the road from Donetsk to Mariupol. They badly destroyed it before entering. This is the picture of Volnovakha’s school number 3 posted on a local TG channel. pic.twitter.com/pFLzpszTbB

Russian troops have been attacking Mariuopol as they advance towards Kyiv, the Ukrainian capital. Satellite images provided by Maxar Technologies show a Russian military convoy broken up and regrouping outside Kyiv. Media reports that Ukraine is fighting to hold off a Russian convoy outside Kyiv as its forces bombard areas surrounding it. Another tweet in the same thread claims to show bombardment of high rises in Borodyanka to the northwest of Kyiv.

131/ Other images show that the long Russian convoy northwest of Kyiv (tweet 69) has mostly dispersed and redeployed, including here in a tree line near Lubyanka.


130/ New satellite images collected this morning in Ukraine include this one showing multiple high rises in Borodyanka, northwest of Kyiv, that have been heavily damaged and partially collapsed. Same location as tank seen firing in tweet 82: 50.643383, 29.933464

Russia Ministry of Defence Asks For UNSC Meet On Alleged ‘US Bioweapons Lab’ Russia claims that it has discovered laboratories in Ukraine near its borders funded by the United States where experiments in chemical and biological weapons are being conducted, Russia has asked the United Nations Security Council for a meeting on the issue. The United States has denied that it “owns or operates” these facilities, while Kyiv insists they are only for “civilian research” purposes.

Russian Mission asked for a meeting of #SecurityCouncil for 11 March to discuss the military biological activities of the US on the territory of #Ukraine https://t.co/51LOJwi6zy

Ukriane’s President Volodymyr Zelensky has clarified that ““Neither chemical weapons nor other weapons of mass destruction are being developed on our soil”. The U.S has also claimed that it is in fact Russia that is operating “active chemicals and biological weapons programmes”. Under Secretary of State for Political Affairs Victoria Nuland told lawmakers that Ukraine does have “biological research facilities” and Russian forces may try to “gain control” of the hazardous materials. Ukraine has also told the UN’s nuclear watchdog body IAEA that it has “lost all contct” with nuclear facilities at Chernobyl nuclear power station which is under the control of Russia. A fire and limited conflict in the area had set off fears of a possible radiation leak, which, however, did not happen. U.S. Approves $13.6 Bn. Aid, But E.U Rejects Ukraine’s ‘Fast Track’ Membership Plea The United States Senate approved an omnibus spending bill yesterday that approved almost $13.6 billion in aid to Ukraine, and also is in the works to revoke Russia’s “most favoured nation” status in trade, supported by the European Union (EU) and G7 countries. The aid package is reportedly meant for Ukrainian refugeea and to shore up troop and armaments deployment in Europe. The European Union, however, has rejected Ukraine’s bid to join the bloc on a fast-track basis. After talks in Vienna which ended today on Friday, Dutch Prime Minister Mark Rutte said “there is no fast-track process” while Croatian Prime Minister Andrej Plenkovic said “nobody entered the European Union overnight”.