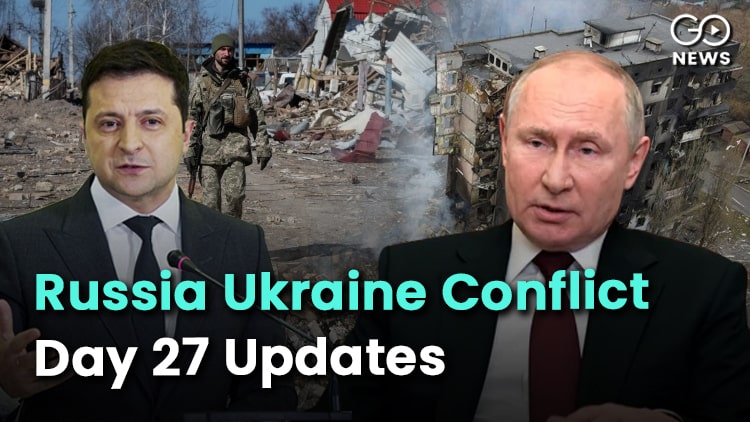 The Russian ‘military operations’ in Ukraine continued for the 27th day today on Tuesday, March 22nd. President Zelenskyy of Ukraine said that he was willing to discuss his country foregoing NATO membership in exchange for a ceasefire, withdrawal of Russian troops, and security guarantees to Ukraine, in direct talks with Russian president Vladimir Putin.

Zelensky: "There can't be any 'de-Nazification' in the agreement (with Russia).

When a country that is treading in the footsteps of the Nazi is accusing us of being Nazi – we can't accept that."

Also Read:
Amid The War, Here Is The Food Dependance Of African, Arab Countries On Russia And Ukraine

Ukraine’s deputy Prime Minister Iryna Vereshchuk said today that the focus of evacuation efforts is on the besieged port city of Mariupol. Read more here. The UN has said that the number of people displaced due to the conflict has exceeded 3.5 million

UN: Since the beginning of the war in Ukraine, 925 civilians have died

Another 1496 were injured. Among the dead were 75 children.

In other regions, a total of 669 people died, 735 were injured. pic.twitter.com/SLoAkJg7k9

Indian hospitality startup OYO announced today that it will provide free accommodation to Ukrainian refugees, starting with Poland. It appealed to more than 600 holiday homeowners on its platform to make their properties available to refugees and said that it will bear the costs for those who cannot pay. The conflict continues to intensify with Ukrainian media claiming that 651 residential buildings and 3,780 houses have been destroyed thus far. On Sunday, Russia drew flak again for bombing a shopping mall in Kyiv which killed 8 people. The Russian Ministry of Defense had said that the ‘civil construction’ was being used to conceal Ukrainian rockets.

According to the State Emergency Service of #Ukraine, since February 24, 651 residential buildings in Ukraine have been completely destroyed, and about 3,780 houses have been partially destroyed. pic.twitter.com/vwqZjtNhmr

Yesterday on Monday, March 21st, Russia had asked Ukrainian forces to surrender Mariupol which was refused. Here are the top news updates on the Russia-Ukraine war to know: 1. Biden Calls India ‘Shaky’ On Ukraine: United States President Joe Biden stated on Monday that India was the only member of the QUAD alliance with a ‘somewhat shaky’ stance towards Russia, noting that it has not yet condemned Russia’s “invasion” of Ukraine. He said that the US and NATO was presenting a “united front” on this issue in the affected region and in the Pacific: “The Quad – with the possible exception of India being somewhat shaky on some of these – but Japan has been extremely strong, so is Australia in terms of dealing with Putin’s aggression.” Japan, another QUAD member, said that Russia’s actions warranted a ‘clear response’ from India. Read more here 2. 5 Dead In Luhansk, Russia Accused Of Using Phosphorous Bombs: Ukraine reported five civilian casualties in Lysychansk in the separatist-affected Luhansk region due to Russian shelling including two deaths and three injuries. The capital city of Kyiv has announced a curfew until tomorrow. Wednesday, in light of increased Russian attacks.

Oleksiy Biloshitskiy reports that the #Russian occupiers had recorded another use of banned phosphorus ammunition in #Kramatorsk. pic.twitter.com/h2A8YZz7wQ

Oleksiy Bilochitsky, the police chief of Kramatorsk in eastern Ukraine, said that Russia used banned phosphorous bombs in the city. Phosphorous bombs have been banned by the 1997 Geneva convention and can cause fires to spread rapidly. Read more here  3. Russians Stepping Up Air Warfare Over Ukraine, Says Pentagon: The U.S. has stated that Russia has flown over 300 sorties in the past 24 hours, and Ukraine is increasing its air operations as a result. It stated that Russia generally destroys Ukrainian targets using air-to-ground missiles fired from Russian and Belarusian airspace. 4. Russians Violently Dispersed Protest In Occupied Kherson, Says Ukraine: Ukrainian media has reported on civilian casualties, destruction of homes, ‘forced relocation’ to Russia, and protests against Russian military being dispersed in Kherson today. Ukrainian armed forces’ news service said that Russian forces threw stun grenades and there was also ‘shoting’ to disperse protestors. Kherson city to the east,  near the Crimean peninsula annexed by Russia in 2014. Ukrainian authorities had earlier alleged that Russian troops had detained 400 people for protesting the occupation of the city. 5. UNGA Session On Ukraine To Resume From March 23:  The Emergency Special Session of the UN General Assembly on Ukraine will resume from tomorrow, Wednesday, March 24th. It is the 11th such session of the UNGA conducted since 1950. India had abstained from the resolution on March 2nd along with 34 countries on a resolution that condemned Russian actions and affirmed Ukraine’s territorial integrity.

Following up on a letter received from 22 Member States earlier today for the resumption of the 11th Emergency Special Session of GA, I will be convening the ESS at 10:00 a.m., on Wednesday, 23 March 2022, in the General Assembly Hall, UN Headquarters, New York. pic.twitter.com/47nSJ22vmL