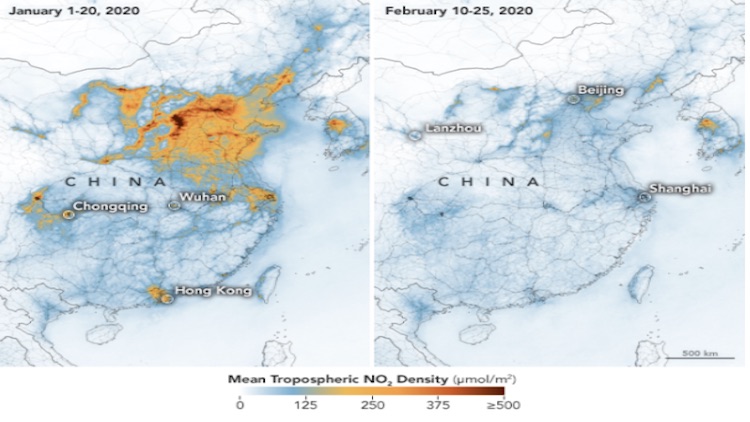 The novel-Coronavirus might be microscopic but the worldwide impact can be seen from space. Latest aerial photographs released by space tech firm Maxar Technologies show the astonishing changes at some of the world's busiest places after the outbreak.  Also Read: Kerala, Noida Metro's Unique Initiatives On Women's Day

Wuhan, China, toll plaza: A bustling city of 11 million people, but residents are staying home because of the epidemic.

Tiananmen Square, Beijing, China:  It resembles a ghost town after people abandoned what was once the world's busiest tourist attractions. Space Mountain, Tokyo Disneyland: Since February 28, Tokyo Disneyland and Tokyo Disney Sea in Japan have been closed since February 28 out of concern for visitors and guests. Disney's parks in Hong Kong and Shanghai are also closed. Duomo di Milano, Milan, Italy: Italy is facing the largest epidemic in Europe with over 3,000 confirmed cases and 107 deaths, as of March 5. That seems to have limited the crowds at the Milan Cathedral. Wuhan, China, airport: China closed the airport in Wuhan in January because of the outbreak. The airline industry could face a $113 billion hit because of coronavirus fears, according to the International Air Transport Association. Fatima Masumeh Shrine, Qom, Iran: Outside China, Iran is one of the hardest-hit countries, with over 3,500 people infected and 107 deaths. Authorities have not been able to practice traditional burial practices because of fear of spreading the disease. San Marco Square, Venice: Venice's popular and often-packed San Marco square looks empty, even in Carnival season. Data from U.S. and European satellites show a substantial drop in the concentration of nitrogen dioxide (NO2) pollution in China since January. NO2 is a harmful substance emitted by gas vehicles, power plants and other machines that burn fossil fuels.

(A map showing the sharp decline in emissions over China between early January and late February amid Coronavirus lockdown. Image: © NASA Earth Observatory)

(Another map showing the sharp decline in emissions over Wuhan, the epicenter of the viral outbreak. Image: © NASA Earth Observatory)

The decline is likely related to an economic slowdown and travel restrictions in China since the virus became widespread, according to a statement from NASA Earth Observatory. "This is the first time I have seen such a dramatic drop-off over such a wide area for a specific event," the statement read. Image 1: China's Wuhan almost a ghost town is bereft of vehicles and people. Courtesy: Planet Labs Inc Image 2: Usually crowded train station in Wuhan is devoid of trains and human activity. Courtesy: Planet Labs Inc The deadly virus has so far claimed over 3,300 lives, with almost 1 lakh cases of Coronavirus have been reported globally. The virus has spread to at least 85 countries and territories, according to the World Health Organisation.
TAGS Fatima Masumeh Shrine Milan Tiananmen square Tokyo Disneyland Beijing Iran Maxar Technologies globe China Wuhan coronavirus outbreak coronavirus satellite imagery