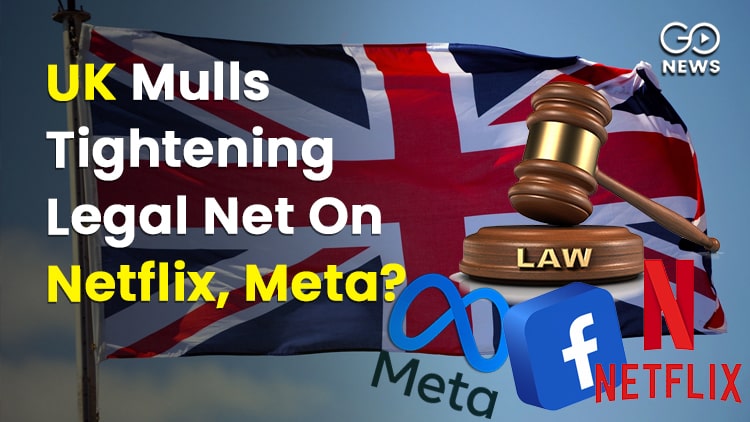 The world’s biggest online streaming platform, Netflix, has come under fire in the United Kingdom due to a show by comedian Jimmy Carr which makes light of the extermination of Gypsy,Roma, and traveller people by Nazi Germany during the World War II period. UK Culture Secretary Nadine Dorries said that there could be new legislation “very soon” that could “bring into scope” such comments bring broadcast. Dorries made these remarks while speaking to BBC Breakfast on Saturday. “We are looking at legislation via the media bill, which would bring into scope those comments from other video-on-demand streaming outlets like Netflix.”
Also Read:
Status Of ‘Aatmanirbhar India’ In Defence

Similarlty, she also told Times Radio that: “We don’t have the ability now, legally, to hold Netflix to account for streaming that, but very shortly we will.” Jimmy Carrr’s comments in his Netflix special have been met with intense condemnation from advocacy and anti-hate groups such as Holocaust Memorial Day Trust, the Auschwitz Memorial and Hope Not Hate. The Gyspy, Roma, and Sinti communities have been historically discriminated against and marginalized in European societies, and were the targets of Nazi persecution along with 6 million Jews in the 1930’s and 40’s. Jimmy Carr had attached a “trigger warning” label to his show and admitted at the outset that it contained “terrible things”, later saying that his remarks had “educational value” as people overlook the other communities who were persecuted and only talk about 6 million Jews. Big Tech Execs Could Also be Jailed For ‘Illegal Content’ Online The Culture Secretary Nadine Dorries, while speaking to Times Radio, also spoke about the topic of online safety, saying that the top executives and leaders of Big Tech companies that operate social media platforms can “absolutely” end up behind bars if their platforms violate the rules of the new Online Safety Bill that is presently in its draft form. Dorries described the legislation as a “notice to the online platforms to say here it is, we’re letting you know what it is now, so start doing what you need to do.” The country’s broadcast regulator Ofcom will be empowered to take legal action against those firms that do not comply on content removal requirements that fall under categories of revenge porn, hate crime, fraud, the sale of illegal drugs or weapons, the promotion or facilitation of suicide, people-smuggling, and sexual exploitation. However, other commentators have expressed scepticism at her claims that the bosses and top leadership of these firms could be held directly criminally liable for failure to remove content. UK’s Online Safety Bill And Social Media Regulation In India The Online Safety Bill, 2021, was introduced in the British Parliament in May last year and seeks to regulate online content and social media. It proposes a “duty of care” on online platforms towards their users, which is a legal obligation to ensure the prevention of harm to customers of a service where it is likely to occur. It seeks to impose a fine of £18 million or 10% of the company’s turnover for compliance failure through the country’s communications regulator Ofcom, while also seeking to institute ‘democratic’ safeguards such as penalties on censoring journalistic opinions and content. During the ongoing Parliament Budget session in India, the IT minister Ashwini Vaishnaw said that the Central government is ready to bring in “stricter” social media rules with the consensus of the House. Mr. Vaishnaw had said: “We need to bring a balance in society, bring a consensus that to safeguard the future of our youth, women, sisters and daughters, social media will have to be made accountable,” he said. “We will have to give more strength to those rules.” There has also been criticism of the bid to increase regulatory oversight of social media in both the countries on the grounds of free speech and expression.

The UK Online Safety bill is what happens when someone tries to use “take down bad stuff but leave up good stuff” as a law.
It’s a pile of obligations tied to novel, undefined categories of permitted and prohibited expression. The crises of interpretation write themselves. https://t.co/s4MiZMxWaa