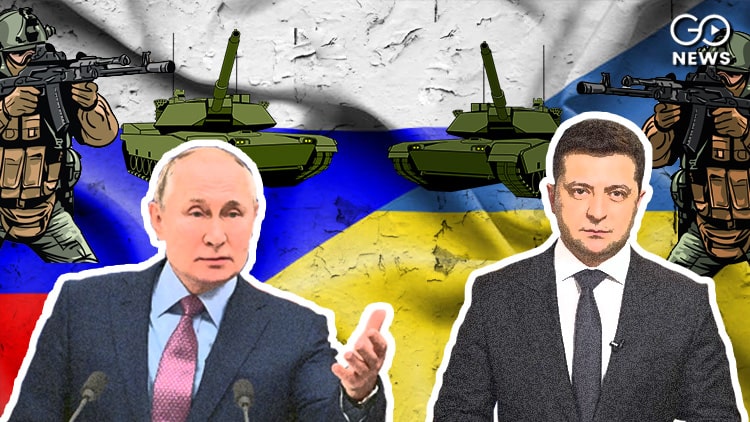 As the Ukraine conflict continues for the third day, Ukraine continues to claim attacks on civilian centers in the capital Kiev and other cities like Kharkiv along with casualties inflicted on the Russian military, whereas Russia has communicated updates about the positions in Ukraine that its military has captured as part of what it says are “de-nazification” operations meant to protect the people of Donbass regions. Russian President Vladimir Putin has called for de-escalation and dialogue, and called upon the Ukrainian army to “not become human shields for Nazis”.
Also Read:
Russia-Ukraine Conflict: Putin Moves Troops In Donbass, Stock Market Feels Heat!

Early Stirrings Of Peace Process As Military Operations Continue As the military operations by Russia continues, the Kremlin has stated its willingness to send a delegtion in Minsk for de-escalation. Two days ago, President Putin had stated that he is open to “direct and honest dialogue”. He made the statement on Defender of the Fatherland Day commemorating Russia’s armed forces: "Our country is always open to direct and honest dialogue, for the search for diplomatic solutions to the most complex problems" Ukraine Gets Ammunition From France And Netherlands The conflict is a developing situation on ground and the death toll of civilians is mainly being reported by Ukrainian authorities. Russian state media, on the other hand, has largely focused its coverage on the Ukrainian army offensive in separatist-controlled Donbass and the allegations of far-right elements in Ukrainian armed forces and rights abuses of its Russian-speaking people. Ukrainian authorities have shared visuals of a high-rise apartment building in Kiev that was shelled by Russian forces overnight. The city’s mayor said that ther were 35 casualties including two children.

Similar claims were being made throughout the day, such as the one below by Kharkiv regional administration:

⚡️ 100 invaders and 100 units of armored vehicles were destroyed in the region of #Kharkiv, according to Oleg #Sinegubov, chairman of the regional state administration.

Ukrainian President Volodymyr Zelenskyy released a video today morning denying rumours that he had fled the country or surrendered, saying that “we will not lay down our arms”.

France’s President Emanuel Macron has said that “this will be a long war”, and “we must be prepared”. He also confirmed that the country will supply ammunition to Ukraine for its defense. Ukraine’s President Volodymyr Zelenskyy also said that “partners” were sending weapons to Ukraine. The Netherlands has approved 200 Stinger surface-to-air missile systems for Ukraine.

The #Dutch government has approved the decision to send 200 Stinger surface-to-air missile systems to #Ukraine.

Russia’s defence ministry has claimed that 211 Ukrainian military structures had been damaged, while Ukriane claimed that it had killed 1,000 Russian troops, while Russia has not confirmed its troops’ death toll. Ukraine has also claimed that it downed 80 tanks, 516 armoured combat vehicles, seven helicopters, 10 aircraft and 20 cruise missiles of the Russian military. There were also conflicting reports on Russian capture of the southeast Ukrainian city of Melitopol as claimed by Russia. However, UK armed forces minister James Heappey said he “does not recognise reports that Ukraine’s southern coastal city of Melitopol has fallen to Russian forces” Fresh Round Of Sanctions As Conflict Enters Day 3 Meanwhile, the European Union, the United States and its allies like U.K and Canada have announced sanctions on Russian President Putin and Foreign Minister Sergey Lavrov which targets their foreign assets and travel. The broader scope of the EU sanctions aims to target 70% of the Russian banking system.

German Foreign Minister Annalena Baerbock said: "They are responsible for the deaths of innocent people in Ukraine, and for trampling on the international system. We, as Europeans, do not accept that."

Today, I authorized a new round of sanctions and limitations in response to Putin’s war of choice against Ukraine.

We have purposefully designed these sanctions to maximize the long-term impact on Russia – and to minimize the impact on the United States. pic.twitter.com/wM0kEBcZba