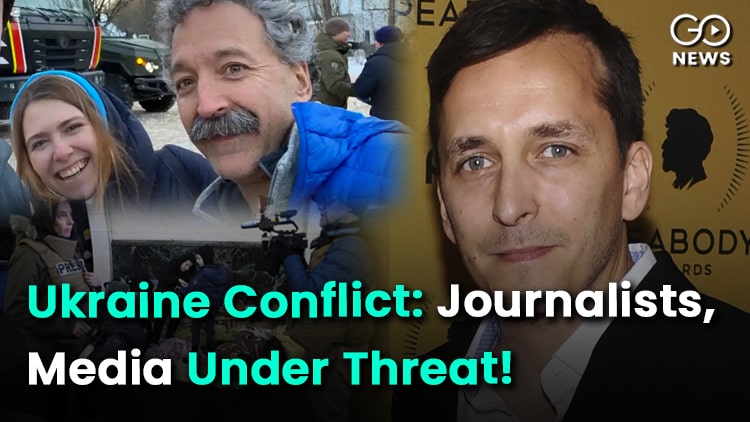 The ongoing conflict in Ukraine has had an adverse impact on media freedom and safety of journalists. While journalists are exposed to many risks while covering conflicts and often face serious injuries and even loss of life, the situation in Ukraine has an additional layer of ‘information war’. Three journalists have been confirmed killed in the conflict this week: Brent Renaud, a filmmaker and journalist who worked for the New York Times in 2015, and the duo of cameraman Pierre Zakrzewski, 55, and Oleksandra Kuvshinova, 24, who worked for Fox News. Renaud was killed in Irpin on March 13th while Zakrzewski and Kuvshinova were killed in Horenka yesterday on March 15th, both on the outskirts of the Ukrainian capital Kyiv.

In yesterday's attack near Kyiv, we have lost a beautiful brave woman - Oleksandra Kuvshinova - Sasha. She loved music and she was funny and kind. she was 24 years old. She worked with our team for the past month and did a brilliant job.
May her memory be a blessing pic.twitter.com/QGzqV3Fy5D

On March 15th, a British Fox News journalist Benjamin Hall, 39, was reported to be severely injured in a ‘blast’ and is presently in intensive care. Ukrain’s prosecutor general Irina Venediktova said that he has received shrapnel wounds to both his legs.At the beginning of this month, on March 1st, a TV tower was struck in Kyiv which resulted in the death of 5 civilians including Yevhenii Skaum, a camera operator for a local TV station. On March 5th, a Sky news team of chief correspondent Stuart Ramsay and four others: Richie Mockler, Dominique Van Heerden, Martin Vowles and Andrii Lytvynenko came under fire from what they say was a ‘Russian reconnaissance unit’. Google News Becomes Latest To Be Banned In Russia On March 23, 2022, Russian regulators decided to ban Google News in Russia for alleged 'disinformation' on the conflict that is termed as 'military operations' by Russia and has now entered its 29th day. Google News is a news aggregating service that allows users to search for news on different platforms. Google's statement on the development is as follows: “We’ve confirmed that some people are having difficulty accessing the Google News app and website in Russia and that this is not due to any technical issues on our end".  Several Western media outlets have shut down in Russia after the enactment of a law that criminalizes ‘fake news’ on its military and its ‘operations’ in Ukraine. Domestic protests against the war have resulted in police crackdowns with nearly 5,000 arrested. Yesterday, a Russian news anchor Marina Ovsyannikova on the state-funded Channel One protested against the war on live TV, and was subsequently arrested and ‘disappeared’. The European Union has also required social media platforms and broadcasters to shut out Russian-backed channels such as RT and Sputnik from access in the region, saying that the move is necessary to counter ‘toxic disinformation’. Russia has imposed bans on Facebook and Instagram after a tweak in its community standards and hate speech policies that reportedly ‘temporarily allowed’ calling for violence against Russians. This has further limited access to on-ground news and unfiltered opinions from the region.