Vaccine Certificate Tussle Between U.K. And India Continues Over Genuineness 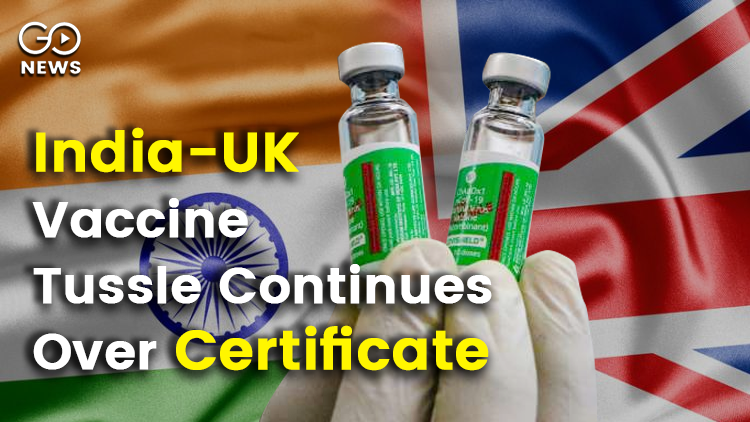 After a minor controversy was kicked up by the United Kingdom’s refusal to recognize India-made Covishield as an approved vaccination for travel into the country, the vaccine was added to the recognized vaccinations list. The updated travel rules said: “Formulations of the four listed vaccines, such as AstraZeneca Covishield, AstraZeneca Vaxzevria and Moderna Takeda, qualify as approved vaccines. You must have had a complete course of an approved vaccine at least 14 days before you arrive in England”.
Also Read:
Does Karnataka Want To Ban Online Gaming?

However, despite this shift, Indian travellers are still obliged to take Covid tests on arrival and undergo a 10-day quarantine. Notwithstanding the high level talks on this issue taken up by the External Affairs Minister himself, it seems that Britain is not so ready to budge on the matter of the credibility of vaccination proofs issued in India. In a statement given to India Today, the British High Commission said: “We are engaging with the Government of India to explore how we could expand UK recognition of vaccine certification to people vaccinated by a relevant public health body in India”. India on its part has defended the CoWin certification process and said that it is not mulling any changes in it since its template conforms to international standards set by the UN and International Civil Aviation Organization (ICAO). The Print quoted a health ministry official as saying: “There are no problems with the CoWin certificate per se and in their official communication with us there is no mention of that either. Our certificate is in line with the template that was developed by the UN and ICAO. The only difference is that the template lists date of birth and ours gives the age — that is the year of birth and not the specific date. Both of these organisations are broad-based with membership of 130 countries and our certificate has all the details” British High Commissioner to India Alex Ellis has tweeted that “neither side has raised technical concerns with each other’s certification process”. But, the problem of certificate authenticity remains vexed. In an interview with NDTV, Ellis even said that “Covishield is nt the issue”, laying to rest the response by Mr. Jairam Ramesh of the Congress that the Indian version of Astra-Zeneca being disallowed was “bizarre”. Given the commonness and ease of rule-bending and breaking in India, it is quite logical that the U.K. would want to guarantee the safety of its citizens against unverified claims of inoculation that can easily be obtained.

Excellent technical discussions with @rssharma3 @AyushmanNHA. Neither side raised technical concerns with each other’s certification process. An important step forward in our joint aim to facilitate travel and fully protect public health of UK and India.

For Indians, the high exchange value of the GBP vs. the INR hurts the pocket when it comes to booking tests and staying for longer durations due to quarantine rules. This is the main gripe against the travel rules. India will continue to be on the ‘red list’ according to the new travel rules applicable from October 4th. Fraud, Not Certification, Is The Real Problem The simple fact is that Indian vaccine certificates are not reliable because there is a booming domestic fake certificates market that first began on the dark web but has now spilled over to common messaging apps like WhatsApp and Telegram. Forged documents are common in India, ranging from drivers’ licences, educational documents, medical papers, and more. Check Point Research is an organization that claims that 1,000 fake vaccine vendors were active on Telegram alone, as of August 10th. It has asserted that this number has undergone a tenfold increase over the past month. Not only India, but Singapore, Austria, UAE, Brazil, etc. are also seeing this problem.