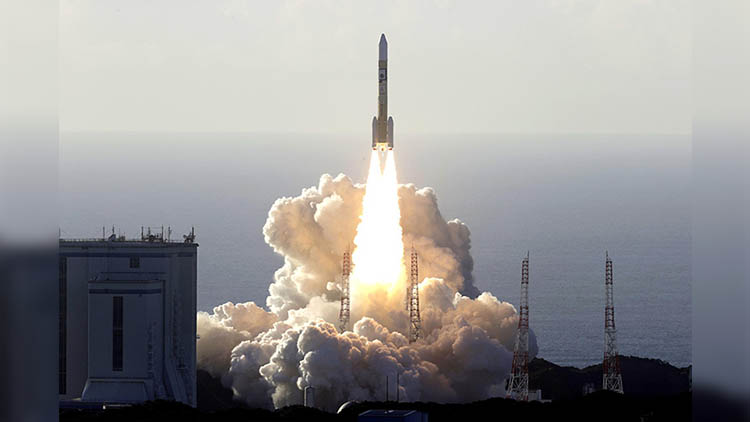 It was a historic day for the Arab world when the UAE’s Mars Mission successfully launched from the Tanegashima Space Centre in Japan early on Monday morning. An unmanned probe called Al-Amal shot off aboard a Mitsubishi H-IIA rocket.
Also Read:
1 Injured As Nepal Police Opens Fire On 3 Indian Citizens Along India-Nepal Border In Biha

The Hope probe successfully separated from the booster, headed for an orbit that will begin a 500 million kilometre journey to the red planet which will take seven months if all goes well. According to the UAE space agency’s flight plan, the Emirates Mars Mission (EMM) spacecraft stays in the Earth’s orbit until the exact alignment with Mars is achieved after which it is reignited to push it on a trajectory towards Mars. With the right direction and velocity of 11km/s, the upper stage gently deploys the Hope Probe.

We have lift-off. H2A, the rocket carrying the Hope Probe to space, has launched from the Tanegashima Space Centre in Japan.#HopeMarsMission pic.twitter.com/pRKZLOL7NT

During the Mars Orbit Insertion phase, nearly half of the fuel is spent to slow the Hope Probe down enough to capture Mars’ orbit. The fuel burn (firing the Delta V thrusters) will last approximately 30 mins and reduces the speed of the spacecraft from over 121,000 km/h to approximately 18,000 km/h.

As radio signals from Mars take 13 to 26 minutes to travel to Earth, the team will not be able to intervene with the Hope Probe. The whole operation is completed 100% autonomously. Once the Mars Orbit Insertion is completed, the Hope Probe will ‘go dark’ – eclipsed by Mars. Only when the spacecraft emerges from the dark side of Mars will communication be re-established, and the team will only then be certain that the manoeuvre has succeeded. The first contact with the observatory after MOI will likely come from the ground station in Spain. Over the next few months, the instruments on board the Hope Probe are tested, and manoeuvres are performed to get the Probe into the correct position for the science observations. (Feature image credit-Gulf Today/Reuters)